Roger Federer is hitting top form when it counts. 'I’m playing the way I was hoping I could play again' 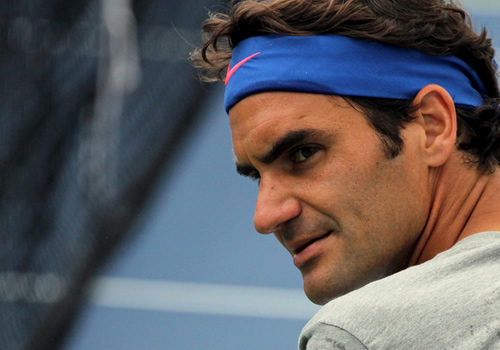 Roger Federer made an extraordinary admission to the assembled Shanghai press after what had been one of the most joyous victories of 2014.

“I’m feeling good, I’m waking up normal,” he said. “I’m not half-broken like I was last year. I’m enjoying myself on the tennis court. I’m playing the way I was hoping I could play again.”

He has talked often this season of his relief at regaining the freedom of movement and the confidence that leached away during a 2013 dogged by back injury. Yet for a man so proud of his positive take on life, the universe and everything—“I always see the glass half full: I’m a very positive thinker”, he said at the ATP World Tour finals last year—this hints at the darker moments that can dent even the most resilient optimism.

All the more surprising because Federer must, over recent years, have grown used of hearing and reading that he is in decline, past his peak and, in this 30s, inevitably heading towards retirement.

The murmuring began in 2011: The first year he failed to win a Grand Slam; went without a title between Doha in the first week of the year and October; dropped out of the top three for the first time in nearly nine years. Surely come the 2012 Olympics, and on the cusp of his 31st birthday, he would decide to play it safe, quit while he was ahead.

Rather, Federer was gearing up for an assault on an Olympic medal, starting with back-to-back Basel, Paris and World Tour Finals titles—the launch-pad to 2012.

He continued with wins in Rotterdam, Indian Wells and Madrid, before taking the grass swing in his stride: the finals of Halle, a record seventh Wimbledon and 17th Grand Slam and, sure enough, an Olympic silver medal. Not content with reclaiming the No1 ranking, he went on to win in Cincinnati, reach the finals in Basel and London, and end the year with six titles and more match-wins, 71, than in any year since the 92 of 2006.

Most players would be forgiven for having a dip after claiming nine titles from 14 finals—only one of them lower than a 500—in 13 months. But most players do not have the reputation of Federer, nor a career so easily tarnished by losses.

And if there was one sure sign that time was not on Federer’s side, it was the back injury picked up at Indian Wells that recurred throughout the summer. The death knell came at Wimbledon with a second-round loss to a 116-ranked opponent, followed by shock losses in Hamburg and Gstaad. And by the time Federer lost for the first time in 12 matches to Tommy Robredo in the fourth round of the US Open—his earliest exit in a decade—the writing was, the headlines agreed, firmly on the wall.

But most players are not Federer.

He arrived in Basel a year ago with just one title to his name—the 250 in Halle—and without his coach of three years, Paul Annacone. He was at an 11-year ranking low of No7 and still not assured of his 12th World Tour Finals. And he was faced with the inevitable questions.

The ‘glass half full’ man was not about to show any doubts: “I’ve had people saying I was going to stop playing, should stop, or how long was I going to be playing—for four years now… Had to face tough questions throughout my career: 15 years I’ve been doing this, but there are more ways to maybe attack you because maybe some results have given people some reason to now question me more. I’m just trying my very best to play a good season, good tournament, and good matches, and that’s all I can really focus on.”

Just as in 2011, he was already doing the groundwork for another resurgent season. He reached the Basel final and then the Paris and London semis. He emerged in 2014 with a new racket, new coach in Stefan Edberg, some solid training blocks for the body and a new intensity about him—epitomised by a more vibrant, more attacking game.

A year on, with home-town Basel just around the corner again, he has once more put the naysayers back in their boxes. There’s been no Grand Slam title this year—though he came close in his five-set loss to Novak Djokovic at Wimbledon. But with Shanghai, he has won two Masters titles from five Masters finals, despite missing the Madrid Masters and barely featuring at the Rome Masters while he became the father of a second set of twins.

Now, his tour-leading statistics are so good that they leave him in a position to target the No1 ranking: Most match-wins, 61; Most Masters match-wins, 26; Most finals, nine—with four titles—and most semi-finals, 11; Most top-10 wins, 13.

Hearing him talk in Shanghai, though, it is as if he never doubted 2014 would unfold this way. He never doubted that his work ethic, his planning, his support team and, of course, his ability, would reap their rewards.

“I feel like I’ve worked hard and gotten really fit. You need to be able to back yourself. Doesn’t matter how long the match goes, how tough the game is… you know you got to be ready, you know you’re going to be fine. I haven’t had a cramp since 1999—that was my only time, in the Davis Cup… I’m very proud of that. Never pulled out. Never lost very much because of fitness, especially later on in my career where I knew I’d put in the hard work.”

He talked of good fortune, too, and of the smartness that has informed the hard work and decision-making: “I’ve been very fortunate and clever as well, I guess, to understand how I need to work, when I need to work.”

The new racket, the Edberg serve-and-volley skills, and that fitness, have all helped Federer to step up the aggression, keep points and games shorter, and send rivals such as Djokovic back to the drawing board for new solutions to the Federer puzzle.

It is not just fellow players who are going back to the drawing board: Headline writers have also been forced to file away their retirement headlines and revise their career reviews.

They, and we, can admire a little longer the physical and—perhaps more impressive—the mental fortitude that brought back a ‘half-broken’ man to within touching distance of the top of his world.

For Federer’s parting shot from Shanghai made his intentions clear: “I hope I can still maintain a few good years on the tour—I really hope so.”

Rafael Nadal readies for Ronaldo poker ‘duel’ – with some Q&A on the side!