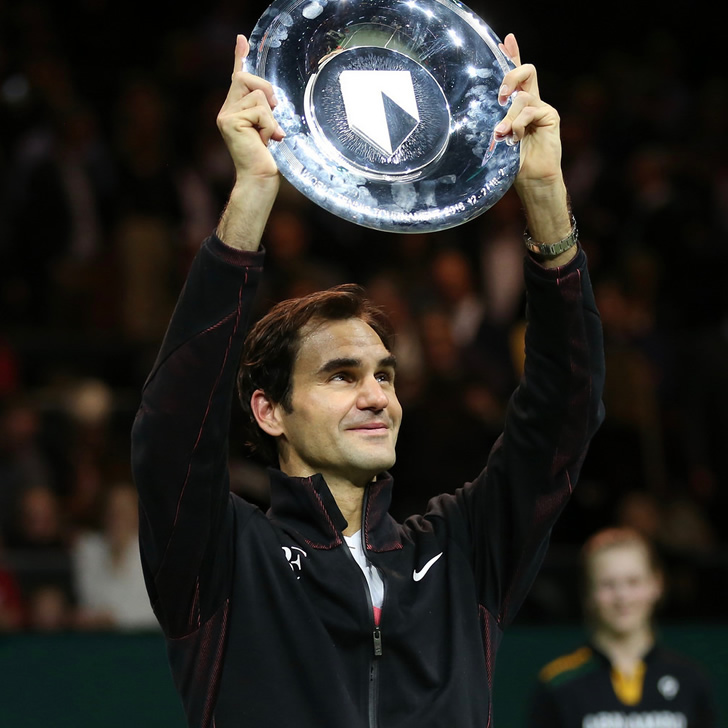 Roger Federer came to Rotterdam with one big target in mind.

If he could reach the semi-finals of the first ATP500 of the year, he would regain the No1 ranking after more than five years, and become the oldest player ever to hold the top spot.

The decision had been taken at the last minute, after he had sealed the defence of his Australian Open title. So late, in fact, that he had to take a wild card into the draw just days before the tournament began.

As he put it: “World No1 would be very special, that’s what I’m fighting for this week… But of course, you need to have goals to be successful.”

With the No1 ambition ticked off then, what were those next goals? He paused, thought, put the idea of end-of-year No1 out of contention, and very quickly settled on the obvious choice:

But make no mistake: his final challenge if he was to lift a third ABN AMRO Championship title here was a big one, the second seed, world No5, Grigor Dimitrov.

The popular Bulgarian who, like his childhood idol Federer, adopted the one-handed backhand, won junior Wimbledon, rose quickly to the top, and peaked last year at No3 after reaching the Australian Open semis, winning his first Masters, and capping his best season with the World Tour Finals title.

His stylish and prodigious talent have made him a favourite since reaching the Wimbledon semis at just turned 23, but it took Dimitrov time to marshal the variety he brings to a tennis court. That, and his confidence, have grown since tying up with Dani Vallverdu 18 months ago,

And while he arrived here after bypassing his home tournament in Sofia because of a shoulder problem, he had looked faster, stronger, more focused with every match. He had even taken to court straight after his matches to get some extra time. It was a clear message: He was feeling very fit, very good.

Federer, long an admirer and friend of his young colleague, recognised the talent, hunger and danger. He said:

“I know Grigor very well… He’s had an incredible last year, breakthrough year, he beat a lot of top-10 players, that’s hard to do, that should give him a world of confidence… He’s athletics, he’s a winner…”

Though it should be added, Dimitrov had not been a winner in their six previous matches. However, this time around, he came out with such intent, and such aggressive play, that Federer’s decision to receive serve looked foolhardy. The Bulgarian fired first backhand winner then a forehand in a blistering opening game.

Indeed it made Federer look sluggish in the early stages, but the Swiss responded in the fifth game to break when Dimitrov fired a poor volley. Federer went on a run of five games for the set, hitting two backhand winners for the decisive break, 6-2.

Dimitrov’s error count rocketed under the pressure from the far baseline—touching 13 in the first set—as Federer sailed into the net at each opportunity. The flow and momentum seemed to free the Swiss still further, and a return of serve bullet led to an opening break in the second set.

To add to Dimitrov’s woes, he now seemed to be in some pain, limping very slightly, though he afterwards refused to comment on any physical problem. A double fault handed over another break of serve to Federer, who was serving with his usual precision. He dropped only three points on serve in the second set, faced not a break point in the match, and closed out the victory, 6-2, in a scant 55 minutes.

Federer put an arm around Dimitrov’s shoulder, and afterwards admitted that his opponent was perhaps not at 100 percent towards the end, but that he could not afford to take his foot off the pedal.

“I like it when its 6-2, 6-2 [smiling]. I enjoyed it a lot. I look at my level and it was really good. I know maybe he wasn’t at 100 percent. But I don’t know if I can play much worse, the way I was hitting the ball, taking advantage of the fact that he was not feeling well, and if you feel your opponent is not 100 percent, you have to assume he [may] feel better all of a sudden.

“I could have played more cautious and careful and I didn’t choose to play that way, and to keep going for my shots was maybe a bit risky, but I felt great out there today, and if everything seems to be working, which this final felt like, it’s a great way to win.”

So Federer continues his clean sweep of 2018, a 12-0 start and back-to-back titles, and he is guaranteed to remain at No1 for at least four weeks, until Indian Wells.

It so happened that royalty was in the Ahoy arena for the conclusion of what has been a notable tournament. The Dutch king, Willem-Alexander, watched the king of the tennis court take one more less-heralded record. The Wikipedia page dedicated to ATP500 tournaments was already updated by the time Federer left the Ahoy for what he admitted may be the last time. The Swiss has now won 20 of them, one ahead of Rafael Nadal’s former record 19. That’s two blows in three days from Federer to his greatest rival.

But don’t expect Nadal to sit back and take it. Federer has 2,000 point to defend in the upcoming Indian Wells and Miami Masters, and he will play little part in the clay season. Things could look different again come the summer.

For now, though, that 100th title looks more than just a pipe-dream for Federer. And in this form and with this passion, perhaps he could yet take what looked like an insurmountable target: Jimmy Connors record 109 titles.