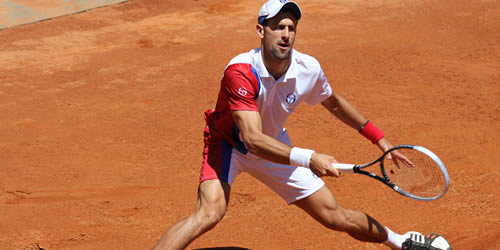 Put the win stats, the title stats, the year-to-date stats, and even the head-to-head stats side by side, and Roger Federer looked the favourite to win one of the most eagerly anticipated matches of the year.

The former world No1’s career boasts twice as many Masters, three times as many Grand Slams and a 14-10 advantage in matches played against the current world No1.

And with four titles so far this year, Federer had a win-loss ration of 31 to 3 while Djokovic’s two titles represented ‘only’ 29 wins to four losses.

The last time these two giants of tennis met was in one of the most memorable matches of 2011, the semi-finals of the US Open, in which Djokovic came back from two sets down, and match points down in the fifth set, to beat his rival. He went on to win the title and subsequently defended his Australian Open title, too.

And although Djokovic made an early exit on the flighty blue courts of Madrid last week, he did reach the final in Monte Carlo. In contrast, Federer won the Madrid title and almost opted out of Rome as a result.

And for more evidence that stats cannot paint the whole story, look simply at their Rome careers. Djokovic has won the title twice—is defending champion—and is appearing in his fifth straight semi-final here. Meanwhile, this is one of the few Masters that Federer has yet to win.

Return to their last meeting and what happened after that spectacular day in New York last September. Federer went on to win seven out of his next 10 tournaments, a 48-3 win-loss streak, and has beaten every other man in the top 10 in their most recent matches—except Djokovic.

Then return a little further to the match before the US Open, another Grand Slam semi-final and an equally significant win. It was in Paris, it was on clay, and Federer halted Djokovic’s unbroken 2011 run.

Little wonder this contest was so eagerly anticipated, and little wonder it was so difficult to call.

Come the hour, however, it was the defending champion who stepped up the pace to a whole new level since conceding the first set to Juan Monaco just a few days before—though the clues were there in his dismissal of Jo-Wilfried Tsonga in the quarters.

If Federer could replicate the aggressive and near-error-free performance with which he beat Andreas Seppi in his quarter, he had a chance. Alas, it was a much flatter Federer who faced two break points in the third game.

While the exchanges were scintillating in themselves—flat, crisp and deep baseline rallies that cracked like gun-fire—it soon became clear that Djokovic was just a little sharper, which put Federer under pressure, drew the greater number of errors and an early break.

Much of Federer’s problem came from an uncharacteristically poor serving performance—just 39 percent of first serves finding their mark in the first set—and that gave Djokovic, one of the best returners in the game, the fuel to press home his advantage. He held his own serve with ease, not facing a single break point in the first set, and kept up the searing down-the-line winners and outstanding defensive play to break Federer again in the seventh. He served out the set, 6-2.

The second set was altogether tighter. As Federer said afterwards, “Novak really put the pressure on me from the start. He came out fast, played really aggressive early, was eager to win.”

This time in the third game, Djokovic again went on the attack, hitting fast and clean, but this time Federer defended deuce with a couple of rare aces. But while Federer made fewer errors from the baseline, his serve was still well below par—just 55 percent—and that prevented him from going on the offensive.

He played only his first serve and volley in the seventh game but, as happened on several occasions, he came off the worse in a long backhand exchange, and Djokovic broke.

Two holds to love later and Djokovic stepped up to serve for the match but fell victim to a Federer not ready to throw in the towel. The Serb explained the problem afterwards: “A player like him can come back any time, which he did. I knew he would be aggressive, because he’s the best in the world at that.”

So a vociferous but evenly split crowd that had resigned itself to “one of those nights” for Federer suddenly had something to lift them out of their seats. Federer won an intense backhand rally to convert his only break point of the match, and then found his first decent streak of first serves to hold to love.

But if the Foro Italico thousands thought they were going to get a third set, their hopes faded fast in a clinical tie-break from Djokovic. He took the early advantage in yet another probing backhand rally and never lost it: Djokovic served it out, 7-4, to set up a replay of last year’s final.

It was a very weary Federer who, while anxious to get away for some rest, was still satisfied at having reached deeper into the Rome draw than he had expected when he made his last-minute decision to play: “I feel better today than I did on Wednesday…I’ve got little things happening now, so I’m grateful for a break.”

Djokovic, after his impressive performance, was exuding confidence:
“I felt really good on the court, the best clay match I played this year.”

No surprise, then, that he intends to adopt the same tactics against Rafael Nadal as he had against Federer: “I need to step in and be aggressive and take my chances. We have a great rivalry and there are no secrets between our games. We will both have the winning attitude.”

These two now have, in sheer numbers, the biggest rivalry in the men’s game: This will be their 32nd meeting. Nadal holds just a three-match advantage, so with both men apparently hitting top form at just the same time, this title really could go either way.