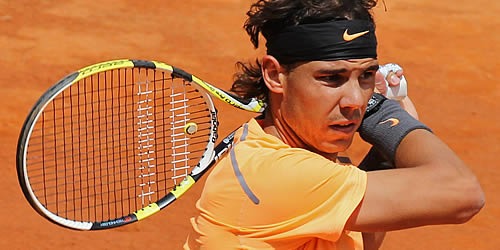 It may have been a day late and it may have been without the numbers of supporters it deserved, but eventually the much-anticipated 32nd meeting between Novak Djokovic and Rafael Nadal took to the glorious centre court of the Foro Italico in northern Rome.

And a straw poll around the grounds—and even amongst the pundits who have watched this rivalry unfold over the year—would reveal no consensus on who would win. What they were agreed on was how significant the result would be in the week before the French Open in particular, and before one of the biggest seasons in tennis in many a year.

For Djokovic, the French title would seal a complete 12-month set of Slams—something that neither Nadal nor Roger Federer has managed—and maintain clear water between him and those two men in the rankings.

For Nadal, it would reassert a dominance on the red clay that he had been forced to share last year when Djokovic won both the Madrid and the Rome Masters. And it would do so at the perfect time—before the Serb went for that French title.

A win for Nadal, after finishing runner-up last year, would also give him enough points to reclaim the No2 ranking from Federer which was lost only a week ago, and that would have an impact on the seedings at Roland Garros.

Nadal’s performance on his beloved terracotta this year had certainly been impressive: He had already beaten Djokovic in the Monte Carlo Masters, taken the Barcelona 500 and, in Rome, beat the impressive No7 Tomas Berdych and the resilient No6 David Ferrer without losing a set.

Djokovic, a winner on the hard courts of the Australian Open and Miami, survived a three-set battle in Rome against Juan Monaco but gradually built up a head of steam through Jo-Wilfried Tsonga and brought his very best tennis to his semi-final defeat of Federer.

Rome, then, was something of a barometer for them both. This was their fourth final against one another here, with Nadal coming out the winner in 2007 and 2009 and Djokovic turning the tables in one of six straight title wins over Nadal last year.

The real barometer in Rome had been working overtime, though. In a week that offered up every kind of weather by turn—blasting winds, humid afternoons, baking sun and, just as in the last three years, a wet final weekend—Sunday became Monday before the men had a chance to lock swords.

And as they did so, at midday on this unexpected Monday, layers of dark clouds still loomed over their final in skies broken by fleeting windows of blue and streams of bubbling white. It did not look promising—the rain had fallen all morning in Rome.

Djokovic opened serve but Nadal opened fire, hammering the defending champion from side to side and pinning him to the baseline to work two break points. However, the deeply-breathing Djokovic—perhaps without quite the swagger he had shown against Federer—held.

Nadal continued to look full of energy and determination, but Djokovic began to warm up and play more of the deep destructive angles with which he so often penetrates his opponent’s game.

After almost half and hour, they had still only reached 2-2. In the fifth game, though, Djokovic—already with six unforced errors on his backhand—faced another break point and Nadal’s sledgehammer of a left bicep hit a return of serve winner to take the 3-2 lead.

But he promptly went 0-30 down and an over-pounded forehand brought up a break-back point. They were level again, and that appeared to lift the Serb who both came to the net for the first time and held a love game for the first time.

Things remained evenly balanced until the 10th game, where a bad out call against Djokovic at 30-30 meant a replayed point. Nadal went on to hold but a distracted Djokovic was broken in the next. One smashed racket and a warning from the umpire later, and Djokovic was a set down, 7-5.

Although the skies were clearing, the furrows were deepening on the Djokovic brow. With the start of the second set, the momentum—always a vital component but one that always brings a strut to the Nadal bearing—was firmly with the Spaniard.

The errors now came thick and fast from Djokovic—he totted up 41 in the match—as Nadal hammered home his point from the baseline. It looked, initially, as though this one would unfold as the first had: Nadal broke in the first game and Djokovic had four chances for an immediate break back in the second. However, the Serb failed to level, and then failed to convert another chance in the fourth.

With a certain inevitability, Nadal edged towards the win. After another hour on the clock, a frustrated and below-par Djokovic—with twice as many unforced errors as winners—doubled faulted on match point and the match and the title were Nadal’s, 6-3.

The numbers when it comes to Nadal, clay and titles, continue to mount. He now has six Rome crowns to add to his eight from Monte Carlo and seven from Barcelona.

He takes the lead over Federer not only in the rankings but in the number of Masters titles, a new record of 21.

He has the best career match record on clay in the Open era—247 wins to just 19 losses, and is now on a 15 winning streak on red clay.

And he must surely now go to Paris as favourite to win a record-breaking seventh French Open crown.

As he said on his first day in Italy: “My goal now is Roma: I don’t think about [Madrid’s] blue clay, I think of Roland Garros.”