Rome Masters 2013: Andy Murray is forced to retire from his second-round match against Marcel Granollers with back problem 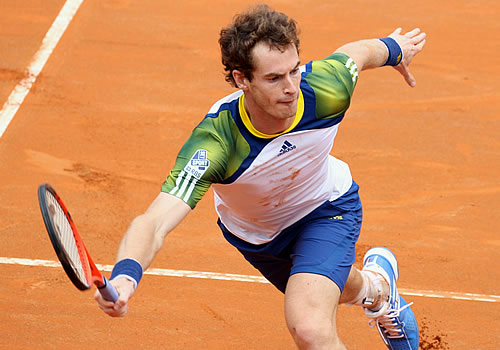 Andy Murray says he would be "very surprised" to be fit for the French Open Photo: Marianne Bevis

The day he turned 24, Andy Murray had just played one of his finest ever clay matches.

That year, in the Rome semi-finals, he came up against the man who would take 2011 by storm, Novak Djokovic. The Serb, who would turn 24 just a week later, had edged ahead Murray in Masters titles and had his first Grand Slams in the bag, and he had also won the Rome title in 2008, but on this night, it was very nearly Murray who took the honours. He served for the match in the final set, only to be broken and then lose in the concluding tiebreak.

Those three hours may not have been how Murray would choose to celebrate a birthday, but they suggested that he was within touching distance of his own first title on clay.

Exactly two years later, on his 26th birthday, he opened his account in Rome as a Grand Slam and Olympic champion, No2 in the world, and still without a clay-court final to his name. But this birthday would leave an altogether more bitter taste in the Briton’s mouth.

After wrestling to contain an on-fire Marcel Granollers, ranked 37 but a former No19, through the first set, and into the second, it became clear that all was not well with Murray.

The Spaniard had broken him twice in the opening set with some inspired use of the drop shot and repeated slaps of the forehand to either wing, but the defence of Murray would normally be up to such a task. Instead, he was a set down, 6-3.

The opening of the second set broke Murray down further. A gruelling 15-minute first service game ended in a break and at 1-2 down, Murray’s problem became all too clear when he called for the trainer. An extended medical break saw him lying prostrate beneath the unforgiving glare of TV and still cameras: It was his lower back.

Nevertheless, he gamely took to court again, and fought back through a whistling crowd and numerous errors from 1-4 down to take it to a tie-break. With Murray keeping the edge throughout, it looked as though he had ridden the injury storm, and he drew level, 7-6.

But while the fans, and Granollers, geared themselves up for a deciding set, Murray was walking past the umpire’s chair to shake his opponent’s hand. He was, he announced, unfit to continue.

With a mix of bewilderment and disappointment, Murray left, head bowed, but worse was to come. An hour later, he announced to the media: “I pulled out because there was a good chance I would be playing tomorrow if I got through. As it is, I’d be very surprised if I was playing in Paris.”

He went on to confirm that not only was this the same problem, in his lower right back, that caused him to miss Madrid 12 months ago but that it has been a problem for a long time.

He now plans to return home as soon as possible, speak with his team and make a plan about the coming weeks.

“We’ll make a decision on Paris after the next five days,” he continued. “I obviously need to take some time off to see how it settles down, but a few days didn’t make a huge difference this time so we’ll have to wait and see.”

The disappointment must be multi-headed for Murray.

To sustain an injury at the start of a big tournament is worrying. To do so during the final run towards a Grand Slam—and the French Open begins in less than a fortnight—is an even greater upset. And all the more so because of the steps he has tried to take this year to get to grips with the surface.

Murray has always said he finds the transition to clay the hardest: “It’s not a surface I grew up on so it doesn’t come naturally to me, the movement and stuff, so I need to work hard on it, spend a lot of time on the courts and get used to it.”

And there, perhaps, lies the problem. He put in lots of extra yards prior to Madrid and Rome this year, but confessed that the clay may only have aggravated his condition.

“The shots that hurt get more exaggerated on clay,” he said. “With a lower back problem rotation tends to be more of a problem and with the balls coming through a lot slower, to generate power you rotate more. There’s no pace from the court and the ball bounces higher and there’s less stability. So it’s a combination of things.”

So a blow indeed for Murray, and a birthday he will remember for all the wrong reasons.

The No3 seed is the highest to exit so far, but is not the only one to fall to injury.

Stanislas Wawrinka, who had to hot-foot it to Rome after playing the Madrid final on Sunday, fought back from a set down in his opener but aggravated a right thigh injury. He withdrew to hand Alexandr Dolgopolov the dubious honour of playing Djokovic in the third round.

Other significant seeds came unstuck at the hands of impressive opponents. One young rising talent, the confident and powerful 23-year-old Jerzy Janowicz, stormed past No8 seed Jo-Wilfried Tsonga, 6-4, 7-6. He will next play the man who beat Dimitrov, Richard Gasquet. No16 seed Kei Nishikori lost to Jeremy Chardy, 6-4, 6-1.