Rome Masters 2013: Novak Djokovic is beaten 2-6 7-5 6-4 by Tomas Berdych in the quarter-finals at the Foro Italico 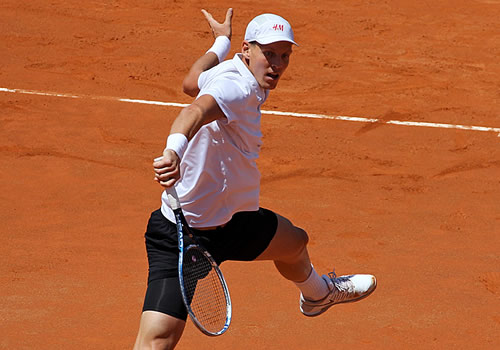 Novak Djokovic admitted he “lost concentration” after the world No1 was knocked out of the Rome Masters by Tomas Berdych in the quarter-finals.

The 26-year-old Serb won the first set at a canter but sixth seed Berdych fought back to wrap up a 2-6 7-5 6-4 win at the Foro Italico and book his place in the last four.

“I lost concentration, I started playing more defensively, and the match turned around,” said Djokovic.

“He gained confidence and stepped into court, I made some unforced errors, and at this level you have to use opportunities when they are presented to you. I lost this game by myself.”

The defeat is a blow to Djokovic’s preparations for the French Open in Paris later this month.

But the Australian Open champion played down the significance of the loss and insists he is in good shape heading into the second Grand Slam of the year.

“I’m playing well, I really feel good on the court,” he added. “I shouldn’t allow these kinds of ups and downs, especially now with Paris, but I have now some more time to prepare.”

The French Open is the only Major Djokovic is yet to win – and he admits it is the “most important” tournament of the year for him.

“I’m positive that I will continue playing better and better as days go by,” said last year’s French Open runner-up. “Paris is the most important event of the year for me.

“I believe I can go all the way. It’s a very long tournament, a Grand Slam. I need to get ready, and hopefully I’m going to be in top shape for Paris.”