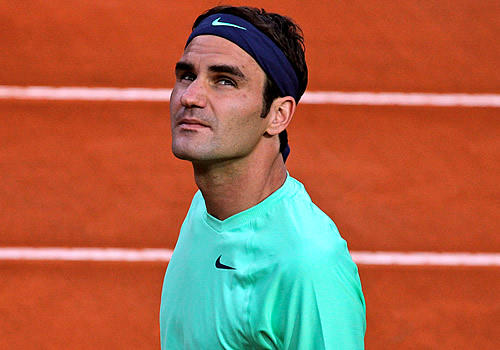 With eight of the tournament’s 16 seeds already sent home before the third round, the Rome Masters must have been holding its breathe as the rain-delayed schedule advanced to mid afternoon.

With No3 seed Andy Murray falling to back injury, Stan Wawrinka lost to a thigh injury, Janko Tipsarevic ill, and a swathe of seeds from Milos Raonic to Kei Nishikori, Marin Cilic to Nicolas Almagro all falling short of their designated spots, there was some relief that what might have proved a tricky match for Novak Djokovic was no problem at all.

He took on the 24-year-old, 23-ranked Alexandr Dolgopolov, an unconventional and sometimes spectacular shot-maker who took a first set from Djokovic in their last meeting at Monte-Carlo. The Serb went on to take that match, but he took this one with rather more ease, 6-1, 6-4, in just an hour. It was the Serb’s 30th match-win of the year.

With Tomas Berdych beating Kevin Anderson, this segment of the draw, despite the loss of early seeds, has therefore gone by the book: The Czech No6 will face Djokovic for a place in the semis after an impressive performance comprising 25 winners to seven unforced errors.

However the Foro Italico was bracing itself for the biggest shock of the day, possibly of the clay season, as Rafael Nadal, attempting to win his seventh Rome title, sat down at the end of his first set against Ernests Gulbis, 6-1 down.

And that was not Rome’s only problem. At precisely the same time, on the second show court, another rising star was on the verge of following in the footsteps of the young Jerzy Janowicz who had put out the No8 seed Jo-Wilfried Tsonga the day before.

Benoit Paire, who turned 24 last week, may be playing in his first Rome Masters but he has been on the men’s tour radar for some time: full of skill, variety, flair and power but lacking the inconsistency to make an impact against the top men—until now.

Ranked 36, he arrived in Rome with some good results, and here he had already put out the fine clay-court player, Juan Monaco, followed by a countryman ranked just above him at 32, Julien Benneteau. Despite taking three arduous sets to get past Benneteau, Paire put together all his strengths to score his first top-10 victory over No7 seed, Juan Martin del Potro, 6-4, 7-6.

In the process, Paire completed a whitewash of seeds from the third quarter, the ‘Murray’ quarter, of the draw, and will face the man who beat Murray, Marcel Granollers. The 37-ranked Spaniard took his place in only his second Masters quarter-final with a three-set victory over Jeremy Chardy 6-4, 1-6, 7-5.

But back to Nadal on Centre Court. The Spaniard knew it was going to be a tough match: He had been forced to come back from a set down in Indian Wells, taking the match, 7-5. But that was on hard courts: Surely Gulbis could not out-do Nadal in Rome?

A quick look at their history on clay—one previous match—suggested that perhaps he could. It was the semi-finals here in Rome in 2010, and Gulbis had already put out Roger Federer before taking Nadal to three sets.

He certainly started aggressively, pounding winners off almost any shot Nadal cared to play. Added to that, he consistently served at over 210 kph, fired six aces in the first set, and won almost two-thirds of the points.

The aggressive game plan continued into the second set, and Gulbis had two chances to break in the third game, slotting one truly glorious forehand winner past a Nadal attempting to take the net. But the Spaniard held and began to pick up the Gulbis serve more consistently. That helped him into rallies and into the match, and his defensive genius began to draw frustrated errors from the Latvian—not always the most temperate of players.

The match turned on a sixpence in the fifth. Nadal chased down what looked like a winning lob, turned and made an outright forehand winner. He held serve, and Gulbis’s frustration at a sequence of close line calls and a couple of signature Nadal down-the-line forehand winners, was too much. Gulbis belted a ball down the court, missing a ball-girl by inches. The crowd whistled, he got a warning, and Nadal, absorbing it all like manna from heaven, put his head down and went for the kill.

He broke for a 5-3 lead, but to the Latvian’s credit, Gulbis broke straight back, and fended off three break points to level at 5-5. But Nadal who was now dialled in, and he took advantage of a growing tally of errors from Gulbis to level at 7-5.

Nadal took an early lead, 4-2, in the third, but Gulbis, showing a stronger temperament than of old, broke back, taking seven points in a row to level 4-4. He resisted match points on his serve at 4-5, too, but it merely delayed the inevitable. This was Rafa’s kingdom and he was not yet ready to acquiesce. He took the match, 6-4, but had won only three more points out of 191 points than Gulbis.

The Latvian was characteristically bullish afterwards. “I thought I was the better player in the match and also in the second and third sets, but he is the champion and, well, I lost against him in Indian Wells when I also thought I played better than him.”

He also rated his chances for Roland Garros: “I am confident going into Paris and I think I’m the toughest unseeded player.”

Nadal, trying but failing to be diplomatic, explained: “If you hit as hard as you can and hit every ball at 216 or 220kph, and that means being the best player, then perhaps he was the best player. For me, the best player [tries to] find solutions against the other player. When I served for the second set and I lost and also in the third, I still was fighting and I found solutions, so the best player won.”

While this drama unfolded, another man was pulling out of the competition: Philipp Kohlschreiber cited vertigo, and No4 seed David Ferrer advanced to set up a repeat of his dramatic meeting with Nadal just a week ago in Madrid.

So in this quarter, too, order has been restored, and Nadal will pursue the No4 ranking that Ferrer claimed at the start of the year, knowing that in three previous meetings in Rome, Nadal has been the victor.

There was no such scare for the No2 seed, Roger Federer, though he played, in Gilles Simon, a man who had beaten him twice in their four meetings. Yet Simon managed to win just three games, 6-1, 6-2, and scored barely half the points of Federer. The Swiss served well, married net plays with sound baseline tennis—particularly on his backhand— and was off court in a little more than an hour.

It has earned him what now looks the best run of the remaining seeds in the draw—though he was quick to dismiss such a view.

“The draw is easy? In the finals too? If the draw opens up, I need to make sure I take care of my side of the draw, on my side of the net and not the guy who’s on the other side of the draw…If I play well I’ve got a chance, if I don’t play well, it’s going to be a smaller chance. I’m not thinking about the finals, or the titles, I’m thinking of a quarter-final against a player I’ve never played against.”

That player was the latest to cause an upset—though the huge talent of the huge Jerzy Janowicz has been making waves since the 22-year-old reached the finals of the Paris Masters last autumn. The extrovert and confident talent from Poland took out Richard Gasquet, 3-6, 7-6, 6-4.

Federer was well aware of the challenge posed, and very complimentary.

“For me he’s really fun to watch. I really enjoy seeing his flair on the court, and his power game. It’s going to be an interesting match-up, especially on clay. I don’t know how much he’s played on clay—grown up on it, I would think, but I’m looking forward to the matchup.”

Federer is not just the only seed left in his quarter but in his half of the draw. He may downplay his chances in Rome, but in truth, they have rarely looked better.