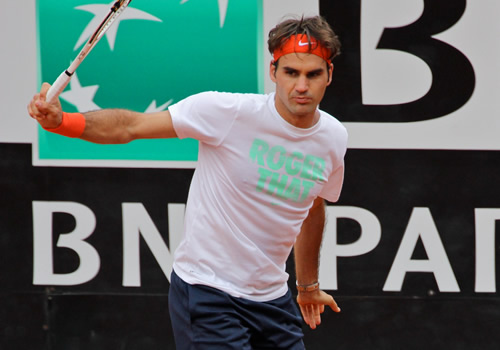 When Rafael Nadal comes to Rome, the third and final clay-court Masters in this most glamorous of seasons, he will begin a campaign that could take him to ‘seventh heaven’.

For as well as laying claim to some of tennis’s most extraordinary records in Monte Carlo and the Barcelona 500—an unprecedented eight titles in both—he also has a record number of wins in Rome, six of them—so far.

2013 would bring No7, and considering he has lost only two matches at the Foro Italico in nine years—to Novak Djokovic in the 2011 final and to Juan Carlos Ferrero in 2008—there are few who would bet against it. And if he does succeed on the Roman clay, he will surely have the perfect preparation—and momentum—to extend his mightiest record of all. A fourth straight French Open would take him to yet another total of eight.

For the moment, though, he is focused on another No7. In reaching the final in Madrid this weekend, he has made seven finals in seven consecutive tournaments—and will be going for his fifth 2013 title, his 40th clay court title, his 23rd Masters title. It looks, then, an impossible task for the rest, and yet…

Andy Murray has put in some intensive preparation for the clay season that has yet to really bear fruit. His best results have come on hard courts while he lost in his second match in Monte Carlo and in his third match in Madrid.

Indeed in all his 40 career finals thus far, none has been on clay, though Rome was the scene of one of his best ever matches on the red dirt: his semi-final against Djokovic in 2011.

Djokovic may have gone out of Madrid early, victim to an inspired performance from Grigor Dimitrov, but he heads the rankings by a mile, has his 2013 eye on completing his Grand Slam at the French Open, and he beat Nadal in the final of Monte Carlo.

Rome has been good to him in the past, too: He won the title in 2008 and 2011 and reached last year’s final. His exit from Madrid enabled him to arrive early to acclimatise to the Rome’s courts, and he was already practising here Thursday.

Another man has also been putting in some hard yards at the Foro Italico. Roger Federer made his return to the tour in Madrid as defending champion after a seven-week rest-and-training block, but an error-strewn match against Kei Nishikori cut short his stay. Saying he was “pretty disappointed with my play”, he promised he would knock the rust off his game: “I’m going to go back to the practice court, train hard, and make sure I don’t have these kinds of days any more. At least I’ll come out with some ideas of what I need to work on.”

He has more incentives than most to put in a good run in Rome. Having already conceded the No2 ranking to Murray in Madrid, he has semi-final points to defend this week, too. And Federer has not simply failed to win a title this year but is the only man in the top 10 yet to reach a final. And not since his very first title 12 years ago has he gone so far into a season without a one.

But make no mistake: Rome will be one of the toughest to make amends. There are several other men apart from Nadal, Djokovic and Murray who are flexing their clay muscles.

Rome, on paper at least, has drawn the reverse pairings of those in Madrid: rather than the promised Federer-Nadal and Djokovic-Murray semis that never happened, the tennis world is this time promised the alternative combos. Where Federer and Murray top and tail the bottom half, Djokovic has drawn Nadal—though it should be remembered that David Ferrer is currently the No4 seed.

As luck—bad luck—would have it, Ferrer finds Nadal in his quarter just as he did last week, so the quarters remain balanced in favour of the “big four”. In fact in drawing Ferrer, Nadal has what looks like a smooth path to the semis. He will first play the winner from a stand-out Italian battle between Fabio Fognini and Andreas Seppi—both finding good form this season and separated by just four places in the rankings.

Above them, an all-Serbian first-round battle looks just as intriguing: Janko Tipsarevic, who has won only four matches in his last nine tournaments, faces Viktor Troicki. Also in this segment is Jarkko Nieminen, who took a couple of big scalps in Monte Carlo and could just upset one of those Serbs.

Ferrer has some decent clay-court opponents before a likely run-in with Nadal in the quarters for the second time in a week. First is a possible repeat of last year’s meet with compatriot Fernando Verdasco, who has not beaten Ferrer since 2010. The No4 seed could then head into Milos Raonic or Philipp Kohlschreiber—back after missing Madrid to build on his semi run in Barcelona and final run in Munich, though he faces a mountain of a task, and man, in the steadily improving Canadian.

Ferrer, if he makes the quarters, will draw hope from the how close he came to beating his nemesis in Madrid—but he seems destined once again come out the loser against Nadal.

Djokovic will most likely face No30 Martin Klizan in a testing opener, and things get tougher. The third round holds Stan Wawrinka, who famously took Djokovic to a 12-10 final set at the Australian Open. This week, he has beaten Dimitrov, Jo-Wilfried Tsonga and Tomas Bercych to reach the final in Madrid, guaranteeing a return to the top 10 for the first time since 2008. Coming on the back of the title in Oeiras last week, he may have too little left in the tank to take on Djokovic in Rome, too.

The other section is packed with big-hitting men. The first round holds Kevin Anderson against Jurgen Melzer, while the second round promises Bercych against John Isner. Also here is Marin Cilic, but Berdych has just continued his great season with a semi finish in Madrid. Against Djokovic, though? One win in 14 attempts.

Federer’s loss in Madrid and his consequent loss of the No2 ranking to Murray came too late to affect the seedings in Rome, but it could be pistols at dawn if both men come through their quarters.

The extra factor in Rome that was missing in Madrid is one Juan Martin del Potro back from illness and thankfully with what looks like an easy opener in just his third match on clay. But he then faces the in-form and confident Nicolas Almagro, a finalist in Houston and Barcelona—though the Spaniard must first get past another clay-court exponent in Juan Monaco, who he beat in Barcelona.

For Murray to reach the quarters, he must get past either Nikolay Davydenko or Marcel Granollers, then possibly Nishikori—but he has beaten the Japanese man handily in their previous three meetings. This quarter, then, could build towards a repeat of the Murray-del Potro blockbuster in Indian Wells, as long as the Argentine is fully fit.

Federer faces a sequence of names who have given him trouble before. By chance, his first may be a repeat of his Madrid opener against Radek Stepanek—which should be straightforward.

The third round, though, becomes more testing: Gilles Simon is a notoriously tough man to wear down, and he thoroughly tested Murray last week, as he has done in three out of his four matches with Federer.

However, the form man in this segment is the 35-year-old making everyone’s headlines. Tommy Haas is about to break the top 12 on the back of some more great tennis in Madrid after winning in Munich. The last time he played Federer marked the start of this renaissance: He beat the Swiss in the final of Halle less than a year ago for the first time in more than a decade. A third-round match in Rome between these two long-standing friends would be fascinating.

The quarters offer up Tsonga or Richard Gasquet, who beat Federer in Rome in 2011 and is on something of a surge this year. Finally, if Federer survives those hurdles, he will likely have del Potro or Murray in the semis, both of whom beat him in their last matches.

MORE: WTA Rome 2013 preview: Williams and Sharapova are ‘the two’ to beat