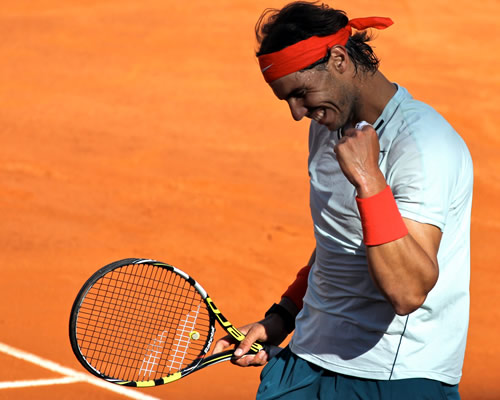 Seven years ago at the Foro Italico, one of the greatest rivalries in tennis was still in its infancy.

The 24-year-old Roger Federer had already been No1 for more than two years, had 37 titles, nine of them Masters, seven of them Grand Slams.

He was about to play the young Spaniard Rafael Nadal who was still a month short of his 20th birthday, but he had already been No2 behind Federer for almost a year, owned 15 titles and was the reigning French Open and Rome champion.

That 2006 meeting in Rome was their fourth final in what would become 19 finals. They would go on to dominate not just Masters tournaments—Nadal and Federer top the list of all-time Masters titlists with 23 and 21 respectively—but also Grand Slams—they top the list of active players with 11 and 17 respectively.

But that 2006 final would encapsulate just how intense this rivalry would become. It took more than five hours and five sets for Nadal to prevail, having fended off two championship points, 6-7, 7-6, 6-4, 2-6, 7-6.

A lot of water has gone under the bridge since then. Two other men stand at numbers one and two in the rankings and split the honours with Federer and Nadal in the current Grand Slams—but both went out of this year’s Rome Masters early, Andy Murray with injury, Novak Djokovic beaten in the quarter-finals.

And the No3 Swiss and No5 Spaniard have continued to make their presence felt. The Swiss last year compiled one of his finest ever seasons, reclaimed the No1 ranking, won six titles—among them Wimbledon and three Masters—and was runner-up at the World Tour Finals and the Olympics.

As for Nadal, he returned this February after seven months injured to reach eight consecutive finals in eight tournaments, reaffirming his mastery of the red clay with a staggering 30-2 win-loss rate this year.

Perhaps it’s little wonder that the Rome title, won by Nadal six times, is one of the few to elude Federer. As the Swiss pointed out before the match, “along with Bjorn Borg, he is the best mover on clay of all-time, so it’s hard to play against him.”

He could not have predicted just how hard.

It all started well enough: Federer won the toss and, as always, elected to serve. His very first shot was an ace, and he then made a serve and volley winner, holding his serve to 15. But from that moment on, it became Nadal’s story.

Federer seemed to struggle with both timing and pace while Nadal was pitch perfect—an early indication, perhaps, of the different schedule they had enjoyed during the week. This was Federer’s first day match in the hot sun, while Nadal had played his last three matches in these conditions. Federer later confirmed that the ball was flying more than it had in his previous matches, but quickly asserted that it was not the reason he lost the match.

Nadal pummelled to Federer’s backhand, slotted forehands down the line if Federer attempted to attack the net, and even got an early read on the Federer serve. He also made solid inroads with his own serve, a hugely underestimated shot in the men’s game. In the first set, Nadal dropped just two points on his own serve while Federer could manage only nine points from 22 on his.

Nadal broke in the third, held to love, broke again and held to love again. For good measure, he broke once more to take the set 6-1 in 24 minutes. In closing the set, he had won a remarkable 20 out of 25 points—and the crowd was stunned.

Federer found a couple of winners at the start of the second set, taking the first two points on Nadal’s serve, but having opened up the court with a deep return of serve, he netted an easy volley that would have brought up three break points.

Instead, Nadal closed him down, defended a break point, held serve and then immediately broke Federer to 15—helped by another netted Swiss volley.

Meanwhile, Nadal’s serve remained solid as he held to love but, 45 minutes after Federer won the opening game of the match, he won his second—though he still faced deuce.

Nadal’s 3-1 lead, however, quickly extended to 5-1 before Federer raised his level to break to love. Was this the beginning of a comeback? He did hold serve but could make no impression on Nadal’s next serve, and the Spaniard raced for home with an impressive love game and just eight unforced errors on the board, in a mere 68 minutes.

What had been almost a dead-heat the last time Nadal and Federer met in Rome had this time opened into a chasm, and Federer was in no doubt that the reason was Nadal’s superiority on clay.

“He’s clearly playing very well,” said the Swiss. “I’m happy for him that his comeback is working so well. He’s super consistent. He’s as strong as ever and probably favourite for the French Open, which he deserves.

“Clearly I’m not going to let him dictate play, but I just have to make sure next time I do a better job against him: I know I can.”

With the 41st clay title of his career, his 24th Masters title, his seventh in Rome, and equalling his best run on clay, the 31 wins he made in 2007, it is hard to see anyone stopping Nadal from making it eight in Paris, and he is even, by his usual standards, pretty upbeat about his own level.

“In Madrid I started to feel better about my forehand, my backhand, about the way that I want to play,” said Nadal.

“Here, in my opinion, I played only one bad match, against [Ernests] Gulbis, but I was there mentally and I won with a lot of fight—and the rest of the matches I played here, yesterday and today, I played at a very high level.”

And just to help his Roland Garros cause, he has already ensured he will be ranked back in the top four before the draw is made.

Federer leaves Rome in a relatively upbeat frame of mind. “It didn’t go the way I was hoping it would go, I missed too many easy forehands. [But] it’s been a good week for me. I’ve played pretty good tennis. Rafa was too good today for me to win.”

His first final of the year also puts on 600 points that will take him back into the race for London. A decent week’s work, then, after back problems in Indian Wells and a long break from the tour. He will, though, be keen to make a real statement in Paris.