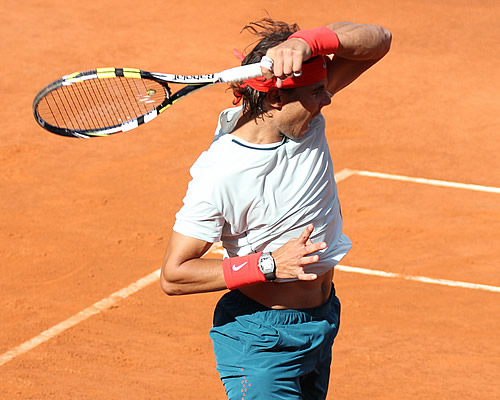 The No5 and No6 seeds, Rafael Nadal and Tomas Berdych, had met many times during the decade that both had been pros on the main tour: 16 times, to be precise.

They had played on all surfaces, in finals and quarter-finals, in semis and round robins. Since their first match in 2005, they had met at least once in every year, in Davis Cup and Masters, in Grand Slams and World Tour Finals.

Invariably, the result had been the same. While the big and powerful Czech—6ft 5in and 200 pounds, though of late he seems to have grown still bigger—had won his only Masters title more than seven years ago in Paris, had reached the final of Wimbledon in 2010, and could boast titles on hard, grass and clay, indoors and outdoors, he had found Nadal almost impervious to his charms.

Indeed not since the hard courts of 2006 had Berdych won a single match, a 3-13 deficit.

And yet, until his quarter-final in Rome this week, he had also not beaten Novak Djokovic in over three years, scoring just one win in 14 previous matches. Then, in the unlikely environs of the Foro Italico, he made an impressive comeback from a set and 5-2 down to beat the top seed, 2-6, 7-5, 6-4.

He has also enjoyed growing success over the No2 seed and the man he could face in the Rome final, Roger Federer. Berdych won their last two matches, in Dubai and the US Open, and five of their last eight matches.

The Czech would be playing, of course, the most dominant man of the decade on the red stuff: Nadal is six-time champion in Rome, seven times a finalist this year, and has five titles in the bag. It’s a season encapsulated by a 34-2 match-win record, 29-2 on clay.

But although Berdych might be seeking his first title of the year, he sat third to Nadal and Djokovic in matches won this year, was a runner-up in Marseille and Dubai and a semi-finalist in Indian Wells and Madrid.

Most striking, though, was the development in the man himself. He has looked stronger, fitter and faster this year than ever before, playing attacking and powerful tennis not just from the baseline but from the net.

He talked of his evolution to Deuce magazine in March:
“What I’ve been really trying to work on is mental strength and preparation. They are very important aspects of today’s game. Everybody can play a good forehand and backhand, there is no difference at all. It’s about the small details and one of them is the mental preparation, which I’ve been trying to improve. I believe I did so.”

Perhaps, then, he was ready to cause his second upset in Rome.

And perhaps he was not. The Nadal who strode onto Centre Court exuded confidence in a way that he had not done in any of his preceding matches: It was little short of a strut, Rafa in full focus.

Should there be any doubt that he meant business, he broke the big Berdych serve in the first game. A speedy hold to love and Berdych got on the board with his next game, but he faced three more break points in the fifth.

The Czech attacked the net, trying to take control from the start of the point, was forced to pick off two smashes, only to see a cross-court winner on the run fly past him. It set the tone for the set.

Nadal held to 15, sealing the game with his signature forehand down the line and allowed his opponent one more hold before serving out the set, 6-2.

Berdych may put great store in his own serve, but the most under-estimated serve in the book is Nadal’s, as he proved here. Despite serving at only 52 percent, he dropped just one point on serve, winning 17 out of 18 points, and a total of 27 points to 12.

The second set was certainly more competitive, if only because Berdych stayed with Nadal through the first eight games and did earn his only break point of the match. But with impeccable timing, Nadal took the Berdych serve to 0-40 in the ninth with a length-perfect drop shot and a follow-up passing winner. The pressured Berdych hit a forehand long for the break, and Nadal served out the match, 6-4, to reach his eighth consecutive final this year.

There is a ruthlessness in Nadal when he has his opponent down that seems quite at odds with the off-court man. Rather than take his foot off the accelerator in the second set, he upped his serving to 92 percent, pounding with vicious spin to both wings.

Berdych, understandably, was irritable with his performance and his inability to apply the same pressure as he had against Djokovic. On another surface, he might, but this is Nadal’s kingdom, and the Spaniard looks thoroughly intent on that seventh Rome title. And if he needs any more spur, winning it will ensure him that precious No4 ranking ahead of Roland Garros.

His final obstacle will come in shape of his oldest adversary, a possible 30th meeting with Roger Federer, or the young Frenchman, Benoit Paire, who he has met twice this year, on clay, and beaten.

One milestone he does not have to wait for is the lead in the race to London. He will overtake Djokovic in the Monday rankings.