Rome Masters 2013: Rafael Nadal sets up a semi-final clash with Tomas Berdych after battling past David Ferrer in three sets 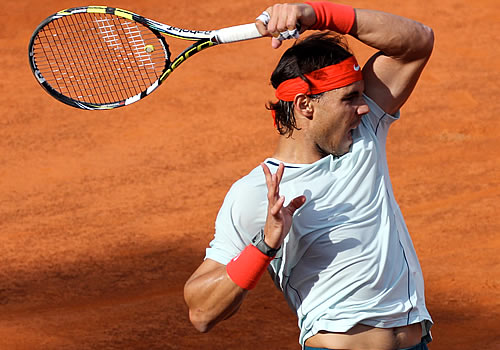 Rome was not ready. Having reached the quarter-final stage of the tournament with just one seed remaining in the bottom half, Roger Federer, and the top seed and two-time winner Novak Djokovic knocked out after leading by a set and 5-2, Rome was not ready to see its six-time and defending champion leave the Foro Italico.

Rafael Nadal came perilously close to leaving in the third-round after losing the first set, 6-1, to Ernests Gulbis and then looking the inferior player for the first few games of the second. But Nadal is one of the toughest, most resilient players in tennis and he survived, despite conceding a 4-2 lead in the final set.

In the quarters, though, he faced the man who has spent most of his 13 professional years losing to his compatriot, David Ferrer. Nadal has beaten him 18 times in 22 meetings, losing only once—in their very first match in 2004—on clay. Three of those defeats had come at this very tournament, including last year.

Nadal’s stats on clay are formidable, but in Rome they are even more so: a career tournament record of 38-2. This was also Nadal’s 56th career Masters quarter-final and he had not lost in 43 straight clay court quarters—since 2005.

But while the cat’s away, the mouse will play. Nadal was out of contention for seven months and it was the 31-year-old Ferrer, a constant in top 10 for much of the last six years, who rose to the challenge and stole the No4 ranking in his absence. He also won his first Masters title on the indoor hard courts of Paris, and in his grafting style, seemed only to get stronger, fitter, more determined to improve.

Nadal returned to the clay courts this year and quickly restored order with a 33-2 run through 2013, 28-2 on clay, and reached seven straight finals, winning five titles. Yet close on his tail was Ferrer, second to his nemesis in match-wins at 33. And perhaps even more significant was the confidence gained from his great performance against Andy Murray in the Miami Masters final and, only last week, his match against Nadal in the Madrid quarter-finals. There, he looked ready to turn the tables on his compatriot before Nadal edged his way to a deciding set after surviving a second-set tie-break.

Perhaps that was on the minds of both men in this fourth Rome meeting. It took them almost half an hour to play just five games but Nadal came out of it with the break. It took almost another 10 minutes for him to consolidate the break, though, as Ferrer persisted with what was to be a hugely successful tactic, attacking the net when the chance arose and confidently taking smashes out of the air.

But survive he did, and had to do so again in the eighth game, fending off a total of six break points before taking the set, 6-4, in just over an hour.

Ferrer hit back hard, though: If Nadal is one of the most resilient men in tennis, surely Ferrer is not far behind. He survived deuce on the opening serve of the set and then broke Nadal not once but twice, persisting with a thrilling game of forehand firepower to open up Nadal’s defence for the volley put-away. It worked time and again, taking him to a 4-0 lead

Nadal broke back in the fifth but again had to fight through deuce to hold serve, and Ferrer stepped up to serve for the match at 5-4. He double faulted on set point, his only one of the match, and Nadal broke.

There was another twist, however, as Ferrer earned a second set-point on Nadal’s serve. The umpire called a time-violation, Nadal’s second offence and therefore a first-serve penalty, and Ferrer, chased down a smash and then a dropshot before making a forehand winner for the set, 6-4.

This now had the makings of a real upset. When Ferrer held his opening serve and went up 15-40 on Nadal’s, the crowd, surely aware of the history of the two men, could barely contain themselves. But when the going gets tough, Nadal gets going, and he produced three of his best serves of the match to hold and immediately punished Ferrer with some pin-point lobbing and drop-shots to work three break-point chances. He converted the last to take a decisive lead.

With another break in the fifth, he led 5-1 and Ferrer managed just one more game before the inevitable scoreboard recorded another win for Nadal, 6-2. But it had taken him more than two-and-three-quarter hours, more than his turn-around against Gulbis. If there is any justice in the world, Ferrer will surely score one win against Nadal before his time is done.

As it is, he may see that No4 ranking become No5 in time for the French Open if Nadal goes on to take his seventh Rome title and regain that precious top-four slot.

There was a third Spaniard in the quarters, Marcel Granollers, but he fell to the flamboyant talent that is Benoit Paire, who continued his hot run in Rome. Paire reached his first Masters semi-final, 6-1, 6-0, in just 57 minutes, having taken out the No7 seed, Juan Martin del Potro, in the third round.

He next faces Roger Federer, who beat Jerzy Janowicz in straight sets.

Rome was not ready to lose Nadal just yet.