Rome Masters 2013: Marianne Bevis brings us some headlines and photos from the Foro Italico as French Open preparations continue 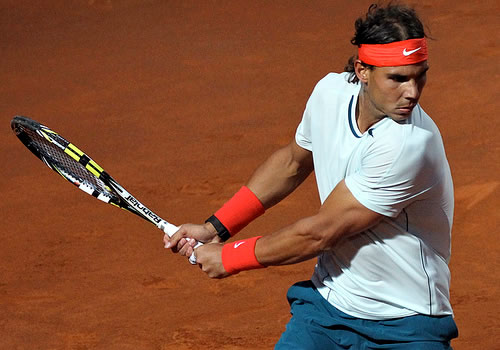 It’s Rome, one of the most glamorous stops on clay road to Roland Garros.

It is not meant to be like this. For this is not the characteristic thunder-storm that usually flits overhead a couple of times each year during Rome’s tennis showcase. This is serious rain, from grey skies, filling Rome’s countless potholes and trickling down umbrella silk.

There are, of course, no roofs over the Foro Italico’s courts but thankfully they have invested in what the US Open cannot: covers to protect the clay from the worst of the weather. When the sun returns—and this most optimistic of places headlined the day’s play with “Djokovic, Federer, Ferrer, Nadal feature in Rome action”—things will be back to normal in the blink of an eye.

Until then, a little time to enjoy this nation’s favourite names while the sun shone on the Foro Italico.

And top of the pile, here in Rome, are the reigning women’s doubles champions, Sara Errani and Roberta Vinci. Already they have started their defence, winning their first match since being beaten by Lisa Raymond and Laura Robson in Miami. 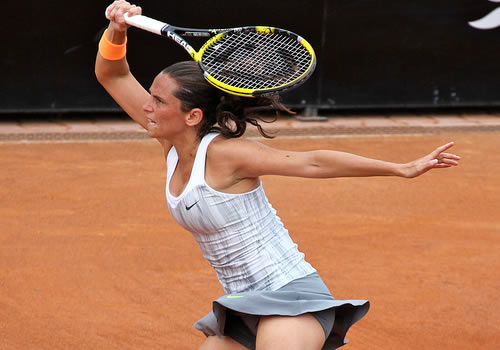 Errani and Vinci are now 51-9 all-time on clay and on a 28-match-win streak on clay, but they are not just French Open champions: They have since taken the US Open and Australian Open titles and they top the doubles rankings. But what is so impressive about both women is their increasing success in singles, too.

Errani returned to a career-high ranking of No6 last week and her 29 match wins in 2013 are second only to Serena Williams’s 31. Aged 26, and a petite woman among so many tall rivals, she last year enjoyed the best of her career to reach her first Major final, at Roland Garros.

Her doubles partner and close friend Vinci, also just 5ft 4in tall, is playing her 16th professional season but broke into the top 20 for the first time last year, Now, aged 30, she hit a career-high rank of 12 last month.

Both are already into the third round in Rome, and whenever they are on court, there is not even standing room, with fans captivated by their late-blossoming success and their camaraderie. And with Flavia Pennetta and Francesca Schiavone beaten in the first round, the Errani-Vinci love-affair will only grow more intense. 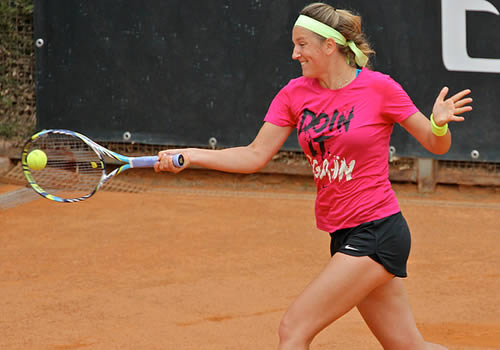 World No1 Victoria Azarenka pracitises at the Foro Italico

Another Italian carrying high expectations was Fabio Fognini, who hit a career-high ranking of 24 last week after beating the likes of Tomas Berdych and Richard Gasquet in Monte Carlo. But he floundered against defending champion Rafael Nadal, despite playing to a Centre Court home crowd, 6-1, 6-3 in barely an hour.

The evening may have been cool, the skies trying release a few drops of rain, but Nadal was like a shot of sunshine, plying his clay-court trade as only he can. He is, after all, hoping to reach his eighth final in as many tournaments this year, and to win his sixth title. Now on a 32-2 match run, he is chasing his 24th Masters crown and his seventh title in Rome.

Who is left to halt the Spaniard? Novak Djokovic, last year’s finalist and a former champion, could be his semi-final opponent. Roger Federer, seeking his first title of the year and his first ever in Rome, could meet him in the final, especially as Andy Murray, the man who supplanted Federer as No2 in the world and was in line to meet the Swiss in the semis, retired during his first match. 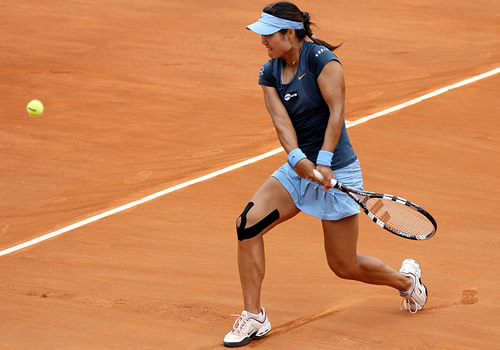 If Federer makes it that far, the buzz surrounding his new look may finally die down. For now, though, the loss of his waves of hair has made waves of its own around the Foro Italico.

He variously commented about the cropped cut as “a bit more than I intended” and “a way of losing weight quickly”. Whatever the reason, it did little to dull his tennis or his popularity—even thought he, like Nadal, beat an Italian in his first match.