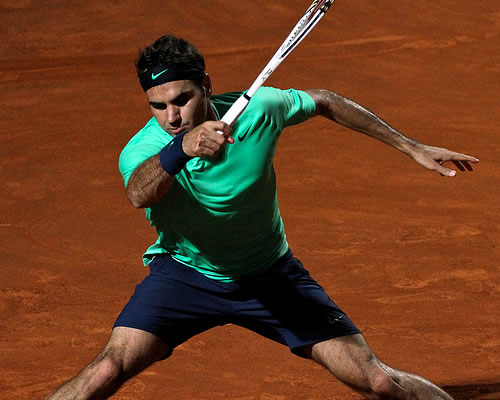 Roger Federer is looking forward to locking horns with Rafael Nadal once again as the pair prepare to face off in the Rome Masters final.

World No3 Federer booked his place in the Foro Italico showpiece after overcoming unseeded Frenchman Benoit Paire in straight sets 7-6 (7-5) 6-4.

Nadal earlier made light work of Novak Djokovic’s conqueror Tomas Berdych to seal a 6-2 6-4 victory and a place in his eighth straight ATP Tour final since returning to action earlier this year.

And second seed Federer is relishing the prospect of tackling his long-term rival on the Spaniard’s favourite surface.

“I think it’s nice to have those revival moments, both of us, because we’ve had some epics, particularly in finals,” said Federer. “I’m sure we are both looking forward to it. I clearly am, I hope it’s the same for him.”

Federer added: “Rafa is a tough player for me to play against. He’s the best player on clay in such a long time in history. I like the challenge of playing against him and I’m happy I get another opportunity tomorrow.

The Swiss 31-year-old also insisted he is pleased to see Nadal back in action after knee trouble hampered the second half of his season last year.

“It’s nice to have him back on tour,” he continued. “It creates more energy for all of us. But then again, I think he’s just going match by match, point by point and at the end it’s fairly simple.”

And Nadal added of the clash: “We are here in 2013 an he is No3 and I am No5 [in the world]. We are still playing good and I hope that this is not going to be the last time.”