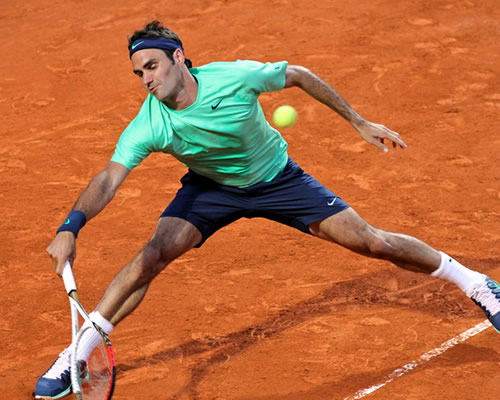 On the day when the big guns fired up at the Foro Italico, the quarter that might be titled ‘single-handed backhand corner’ put on a show designed for tennis purists.

The show comprised three particular matches that culminated in the first appearance by Roger Federer, the second seed though newly No3 in the rankings. He would be one half of a battle between two 31-year-olds, his opponent being the Italian wild card Potito Starace, who had prevented a rematch of Federer’s Madrid opener against Radek Stepanek.

But he was just one of four over-30s in this trio of matches. The first of the day brought together two men playing in their 10th Rome Masters: Tommy Haas, at 35, one of the men of the season due to his surge up the rankings from outside the top 100 a year ago to a current No14; and the 30-year-old PhD from Russia, ranked 30, Mikhail Youzhny.

This was their seventh meeting, and they were level 3-3, but their only meeting on clay was 11 years before in Munich: Youzhny won it.

Both are masters of the single-handed backhand, both sliced and diced with each other, drove balls cross court and down the line, but it soon became clear that Haas, with 28 matches under his belt, was showing signs of wear and tear. With one thigh taped for support, he made increasing numbers of weary errors while Youzhny, something of a magician in the shot-making school when his eye is in, took full advantage.

It took the Russian just 82 minutes to advance to the second round, 6-4, 6-3, and the dubious honour of playing Gilles Simon—one of the most relentless men on the tour—who took three sets, as he often does, to knock out Filippo Volandri.

From one double delight of single-handed backhands to another, a highly-anticipated meeting between two men who have variously been burdened by comparisons with Federer. The backhand has been the starting point for such references, but their youthful and flamboyant arrival in tennis as all-court, all-shot players was another.

Richard Gasquet, still only 26, won his first title in 2005, having burst onto the scene in Monte Carlo as a teenager to beat Federer at his own game. The Frenchman has also been enjoying something of a renaissance this season after dropping outside the top 20 at the end of 2012. Titles in Doha and Montpellier formed part of a season’s 23-7 match run.

Grigor Dimitrov, though, has had tongues wagging since he followed in Federer’s footsteps to win the junior Wimbledon title, donned the same racket, and grew into a slightly taller version of his youthful idol. The shape of his serve, his fondness for aggressive tactics and his off-court charm only added to the story.

It’s a burden he has tried to shed, but in playing Gasquet, it was akin to watching mirror-images: that backhand, a deceptive serve, sliced defence, drop-shots to die for, and more than a little ability at the net.

In this match, as in their previous three, it was the greater experience of Gasquet that told. Their tennis was certainly crowd pleasing, but Gasquet mixed up solid defence from behind the baseline with ventures to the net for quick finishes, and his backhand was working like a dream. Add in a growing number of inch-perfect drop shots, and Gasquet asserted his superiority rather sooner than the Dimitrov-supporting fans expected.

Gasquet broke in the first game of the match and held his own serve cleanly through to its 6-4 conclusion. The second set looked as though Dimitrov would stage a comeback when he broke at the start, but his lead was transient, and 2-0 became 2-4: Gasquet served out the match to love, 6-4, in 74 minutes.

And so it came down to the over-31s to complete this trio, and the first question was—who would the crowd would support? They love Federer here with a passion but the presence of the 293-ranked Italian on the other side of the court made this a different prospect.

Few were prepared for the new Federer who strolled into the arena for his first match in Rome. Gone were the curls the Swiss has donned for most of his professional career: The bandana now just mopped his brow. Would the tennis still be the same?

The first question was quickly answered. The Italian crowd cheered their man but they would have taken the roof off, if there had been one, for Federer. The second question was answered quickly, too, in just a tad under 50 minutes of tennis.

Starace started well enough, holding his first serve to love, but he managed not another game in the set, a 20-minute show-case for Federer’s gamut of skills. Starace, it appeared, was the perfect foil. A big, uncomplicated serve to the Federer backhand was chipped back to put Federer on the front foot. There were no problems on that wing, and even fewer on the forehand.

Starace teased with some delightful drop shots, tried coming the net himself, indeed played some good tennis, even earning two break points as Federer served for the first set, but could not convert. He would not get another chance in the match.

The spirited Italian battled through a seven-minute opening game in the second set but, still with just 28 minutes gone on the clock, he was finally broken. He fended off break points in the fifth game to keep the score alive at 2-3, but now Federer let the brakes off, played near flawless tennis, and sealed the deal with a break to love, 6-2. He had, quite literally, scored double the points of his opponent, 58 to 29.

The match proved one thing, even if it was not against one of the heavyweights in the draw. Federer’s movement, speed of foot and timing on the ball looked better than his forays in Madrid. Perhaps, as he promised in his pre-tournament press, his seven weeks off would take a while to bear fruit.

Down the road lies first that fellow 30-something Youzhny, if he beats Simon, and beyond that, yet another fellow one-handed backhand—Gasquet, who beat Federer on this very court in 2011—his only other victory over the Swiss since that first one in Monte Carlo.

Former champion Novak Djokovic, who has reached the Rome final in four of the past five years, took only 70 minutes to beat qualifier Albert Montanes, 6-2, 6-3.

He could face the busy new world No10 Stanislas Wawrinka, who took him to 12-10 in the final set at the Australian Open. The Swiss first has to play Alexandr Dolgopolov after coming back from a set down to defeat Carlos Berlocq.

The Nos6 and 7 seeds powered to the third round, too. Tomas Berdych was a 6-4, 6-0 winner over Denis Istomin, while Juan Martin del Potro beat Andrey Kusnetsov, 6-3, 6-2.

Elsewhere, there was a surprise win for Julien Benneteau over the in-form clay specialist Nicolas Almagro, 7-6, 6-4, and Kevin Anderson beat Marin Cilic 6-3, 7-6.