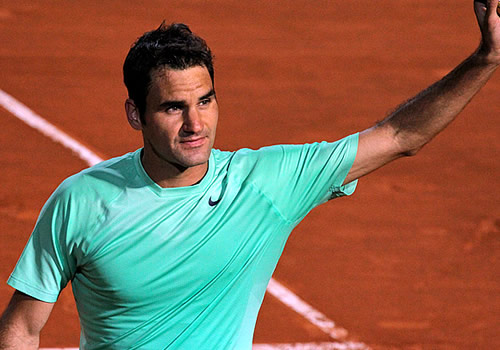 When it was suggested to Roger Federer, after he became the last remaining seed in his half of the draw, that things had opened up nicely for him, there was a very long pause accompanied by a quizzical look.

“If I play well, I’ve got a chance, if I don’t play well, it’s going to be a smaller chance. I’m not thinking about the finals, or the title, I’m thinking of a quarter-final right now against a player I’ve never played against.”

That player in question was the impressive, and impressively tall and athletic, Jerzy Janowicz, aged just 22 and rocketing up 150 places in the rankings in a single year to a current high of 24.

From his first view on the big stage in Davis Cup against Andy Murray four years ago, here was a diamond in the rough, and he made his most recent burst onto centre stage at the Paris Masters where he downed five top-20 players, including Murray, to reach the final.

Here in Rome, he proved his credentials again, beating two major seeds, Jo-Wilfried Tsonga and Richard Gasquet, for the chance to play Federer. Little wonder, then, that the Swiss was cautious about predictions.

“I don’t know that much about Janowicz, so I have to have a proper game plan. For me, he’s really fun to watch. I really enjoy seeing his flair on the court, and his power game. It’s going to be an interesting match-up, I feel.”

Federer certainly had shown, thus far, that his seven weeks off the tour honing his skills and fitness were paying dividends. He lost just three games to each of his first two opponents, most recently Gilles Simon. But could he withstand the speed and firepower of this sometimes brash but always bold man from Poland?

The answer looked uncertain when Federer had to face down two break points early in the first set, and with Janowicz owning the best serving stats on the tour—top for aces, top for speed at 235kph—Federer could expect few chances to earn break points of his own. But serving at 80 percent and out-acing his opponent 7-1 in the set, he did indeed work a break point, in the strategically key ninth game, and converted to serve for the set. He showed little emotion along the way, but allowed himself a small fist-pump as he sat down at 6-4.

Janowicz showed no fear, though, and came out firing. His serve and forehand are both impressive shots, but he has great touch, too, and several times outfoxed Federer with drop shots or wrong-footing drives. It earned him a break straight away for a 2-0 lead, an advantage he held, with a clutch of break chances for Federer snuffed out, until he served for the match at 5-4.

Then, with Federer now reading his opponent’s serve with remarkable focus to chip replies deep to the baselines, the pressure was on Janowicz to serve his best, but he twice double faulted to offer up two break points, and Federer took the second.

Once again, the Swiss serving, full of disguise and variety, was outperforming that of Janowicz, and that told in the tie-break. Federer found himself a point adrift at the start but played a near flawless sequence of points to close it out 7-2, in under an hour and half.

The start of the match had been late, for the day’s schedule had survived early rain and two long battles in deciding two of the other semi-finalists, Rafael Nadal and Tomas Berdych. But hardly a person had left their seat before the conclusion of the shortest, but perhaps most exhilarating, match of the three at 10 minutes after midnight.

And Federer was quick to praise Janowicz as the clock ticked round to 1am.

“I’m happy to have won in straights because the guy had two break points first in the first set, so he could have been a break up there. I did well to save those. And then I had my first chances at the end of the set and I was able to take those, so that was big for me. I was a little lucky to get out of it, no doubt about it.

“He’s a good player. You can see why he causes difficulties to players now and how tricky it’s going to be to play him in the future. He’s a good talent for the game, and I think entertaining to watch and also entertaining to play against.

“He really mixes it up well, he keeps you guessing, he wrong-foots you a lot, and clearly because he’s got such a big first serve, and actually big strokes on the return as well, he usually gets the first hit in.”

Federer was not wrong. In Janowicz, there is clear potential to spearhead the group of tall and talented young players rising up the rankings: Grigor Dimtov, Milos Raonic and the Frenchman who lines up to take on ‘The Master’ next, Benoit Paire.

Federer, again, was only too aware of the danger: “He’s also very talented, a great mover. You can underestimate how tall he is and how great he actually moves for a tall guy, so I’ve got to be careful.”

But these are the kinds of challenges Federer has faced many times during his 15 years as a pro, and he continues to relish them both them and the variety that the latest batch of players is bringing to tennis.

“I like playing big servers,” he said. “Clearly if you lose, it’s very frustrating. It’s always hard to say you didn’t play well, or he played great, against a big server because it’s not really in your control. It’s a question of a few shots here and there; That’s how tennis was played 20 years ago, 10 years ago even. I came through that era, so for me it’s normal that matches are decided this way.

“I guess players today, and fans, have got too used always to play the same rallies over and over again—where the more mentally strong, the physically more strong, or the guy with more patience, is going to come through at the end, so it’s refreshing to play someone like Janowicz.”

Federer has played and beaten Paire twice in the last few months, but they have not met on clay. But the No2 seed will no doubt be ready for whatever new challenges the Frenchman throws at him.