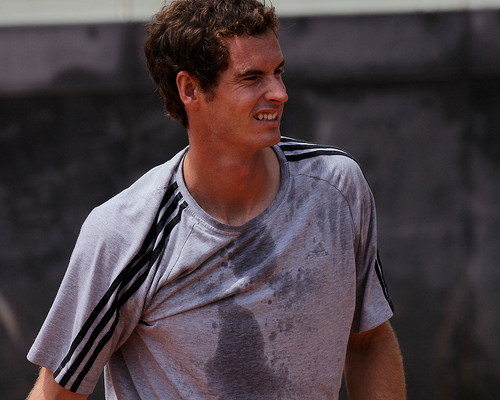 Third-round Thursday is not a headline designed to grab the attention, but in the case of Rome, on a typically hot, bright day, it heralded a set of matches to make a tennis-lover’s heart glad.

Twelve of the world’s top-20 players, seven of the top 10 and all three at the top of the rankings, made up the 16 who were in action.

Of the remaining four, Philipp Kohlschreiber and Jurgen Melzer had, respectively, been as high as No16 and No8. The other two, Ivan Dodig and Jeremy Chardy, had hit career-highs in the 20s last year.

Two men were charismatic young players enjoying career-highs, and with realistic ambitions of breaking the top-10 this season: Grigor Dimitrov at No14 and Ernests Gulbis at 17. What’s more, Dimitrov was up against No6 Tomas Berdych, and all three of their meetings had gone to deciding sets, the most recent in Madrid last week.

It comprised four Grand Slam champions: along with Nadal and Djokovic, there were Stan Wawrinka and Andy Murray.

It featured match-ups as old as the hills—Nadal had played Mikhail Youzhny 14 times—and relatively fresh ones—Jo-Wilfried Tsonga had played and beaten Milos Raonic only twice.

And then there were some significant birthdates. First and foremost, as it is every year in Rome, it was Murray’s birthday, his 27th. Last year, he retired with a back injury on his 26th, but his year, with his first match already under his belt, he was favoured to sail through the 32-year-old Melzer.

The Austrian man, though, was not the only veteran playing for a quarter-final place.

Kohlschreiber, who took on Djokovic, is 30: Youzhny, playing Nadal, is 31; David Ferrer, playing Gulbis, is 32. But the oldest in the draw played the 29-year-old Wawrinka. The evergreen Tommy Haas is 36—though it was hard to tell from the tennis he played in the first match on Court Centrale.

Remarkably for two such mature players, they had met only once before, a full eight years ago, but that was as much down to Haas’s back-story as anything else.

The German’s catalogue of surgeries and injuries seemed always to knock him back from the high of No2 that he reached 11 years ago. His ranking rise during 2012 from 205 to 21 was impressive enough. That he continued his resurgence in 2013 was just as welcome for this crowd-pleasing, all-court one-hander. Two titles from three finals, the semis in Miami and Washington and the quarters at the French Open saw him end 2013 at No12.

But in Wawrinka he played one of the top players of the last year, No2 in the race and Australian Open and Monte Carlo champion. And the Swiss showed his great form in turning round an early break and then resisting three break points at 4-5 to take the first set, 7-5.

Now it was Haas whose rhythm and range stood out, and the fans thrilled to the dynamism and pace of the tennis. He broke twice to level the match, 6-2, with 11 winners to just four errors. In the decider, he managed to clinch the vital break at the fourth time of asking, and served out set and match, 6-3.

His aggressive tactics showed in the 15 points he won at the net, and he talked of his determination not to grind from the baseline:

“You have to be focused and line up the ball really well. You have to be mentally ready before you come in, then when you hit the shot you have to have the right footwork.

“These guys are so fast these days and have so much power they can pass you from anywhere. It’s very hectic, trying to play this type of game, but I don’t want to be the guy playing every other rally 20 shots back and forth. I don’t have the stamina for that too much anymore.”

It’s 12 years since Haas reached the final of this tournament, but he will have to beat Dimitrov—14 years his junior—if he is to reach his first Masters semi in over a year.

Another young gun, No10 Raonic, earned his first win in three attempts against Tsonga to reach his third clay-court quarter-final of the season.

But what about the birthday boy, Murray? Would he take a step closer to reaching his first clay court final, and the dubious pleasure of a quarter-final face-off against Nadal?

The answer was a resounding ‘yes’. He scored his sixth win in six meetings over the Austrian left-hander Melzer after recovering an early break at 3-1 to level at 4-4. He survived a scare in the ninth, too, saving five break points as Melzer went for the lines with precision and pace and used his doubles expertise to score points around the net.

They went on to decide the set in a tie-break, which Murray dominated, 7-1, and he did not look back, breaking for 2-0 after with a run of 15 points from 16. Melzer rallied to level at 3-3 but Murray broke again and served out the match with an ace.

Murray was, naturally, asked how it felt to celebrate his birthday with a win, and he recalled perfectly both last year’s loss and one he suffered when he turned 20:

“The two times I had to retire on the tour was strangely on my birthday, one of them I was 5-1 up against [Filippo] Volandri in Hamburg, and then obviously here last year when I was a set all. So it’s nice to have a better experience on the court on my birthday.”

Here without his family, he had received just two cards and no presents, so it was suggested that a nice gift may be on its way if Youzhny, who had just won the first-set tie-break, should beat Nadal, but he would have none of it.

“To be honest, it wouldn’t be a bad thing if I played Nadal because I haven’t played him for about three years [it was in Tokyo at the end of 2011].

“And with the French Open and Wimbledon coming up, I haven’t practised with him either. So I’d be interested to play him before those events to see how his game has changed and also the things I can do to make things difficult for him.”

By the time he had downed the strawberry cake that was brought to his press conference and headed out with his team for a modest celebration, Nadal had restored order to beat Youzhny, 6-7, 6-1, 6-2.

Murray would, after all, have his dubious birthday wish.