Rome Masters 2014: Will Djokovic claim No1 from Nadal in time for Paris?

Can anyone break the stranglehold that Rafael Nadal and Novak Djokovic have held on the last nine Rome Masters titles? 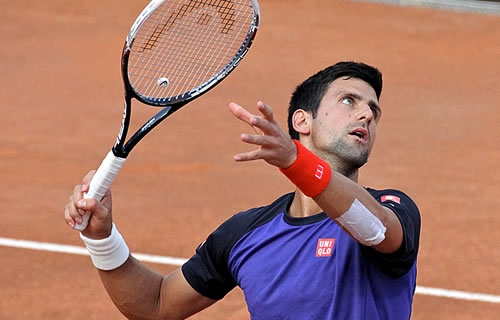 There is just something about the clay in Rome.

Certainly the Magic Box in Madrid has rung the changes with its modern, blue-metal jewel cases that make the brightest and fastest clay courts of the swing seem almost to catch fire in the sun but turn deep crimson in the shade of its angular interiors.

But Rome… well, the colours, the light and its curves and angles speak of Italian frescoes, of the subtle washes that tint the city’s Renaissance villas. It moves from oil-paint vivid in early morning to watercolour pale during the hot afternoon and then back to deeper shades as the sun drops.

Here the courts are less bright orange, more a soft terracotta, a kinder colour that melds ever so slightly with the colour of the players’ skin. Yet it is the marrying of Rome’s traditional qualities with its player-friendly—and fan-friendly—environment that makes it so popular.

The famous monolithic marble figures that used once to surround the Centre Court now gaze down into the basin of its third show court, named after former Italian champion Nicola Pietrangeli.

Alongside it is new Centre Court—surely one of the most beautiful tennis stages on the tour. Like its neighbour, the court is set below ground level while its seats rise steeply upwards to create a curved and intimate embrace reminiscent of that other colosseum in the heart Rome.

Of course Rome’s noise and bustle and uninhibited personality take a while to build while its brash Madrid sibling reaches its climax. But what has this year been Spain’s loss—Novak Djokovic and Roger Federer withdrawing just before the draw, Andy Murray and Stan Wawrinka losing early—has been Rome’s gain.

Already Djokovic and Wawrinka have been acclimatising on the Foro’s main courts—the Serb drawing thousands to watch. The Serb’s campaign, indeed, will be one of the most eagerly watched throughout the week as he returns from a wrist injury to the place where he has twice been champion, and runner-up to Nadal twice more.

Nadal still has unfinished business in Madrid, where he is attempting to defend another clay title, and he will again be the man to beat at what is a vital milestone on the road to Roland Garros. The Spaniard has dominated the French Open, winning it eight times in the last nine years, but Djokovic has made no secret of his ambitions to complete his career Grand Slam there.

The Serb came within touching distance of beating Nadal in the semis there last year, and has beaten him in the last three matches of what has arguably become the rivalry of decade: 40 matches and counting.

But it is not just about laying down a marker for Paris. Because Nadal put such an extraordinary run together through the spring and summer of 2013, he now has big points to defend. His No1 ranking is secure if he wins the Madrid title, but if he does not, Djokovic has the chance to regain the top spot if he wins in Rome.

Djokovic, though, will be acutely aware that Nadal has dominated Rome almost as completely as Paris. He will be gunning for his eighth title and what may be, should he lift the Madrid trophy first, a staggering 28th Masters crown.

No matter the scale of the Nadal records, nor the extent of his rivalry with Djokovic, there are still other storylines that could have a bearing on the fortunes of both.

Will Federer, three times a finalist in Rome, return to court after spending recent weeks with his wife and new sets of twins? Were it not that he will be seeking points to retain his No4 ranking ahead of Paris, the decision may have been a little easier. If he does turn up to defend his final points from last year, he should do so confident in his 2014 form, especially after a final run in Monte Carlo.

Will a coach-less Andy Murray rediscover his confidence after a lack-lustre showing in Madrid? He has yet to reach the final in any clay tournament, but has big ambitions to do well in Paris, where he was a semi-finalist in 2011.

How dangerous will the Monte Carlo champion Wawrinka be? Despite winning his first Major in Australia, much of his success has come on clay: He was a finalist here in 2008 and in Madrid last year, and more than half his titles and finals have come on the red stuff. More significant in the late-blossoming Wawrinka’s year is that he already has six wins over top-10 players this season.

And then there are the young guns, many of whom have made strong surges this year. Kei Nishikori is unbeaten in 10 matches on clay, currently contesting the Madrid final after winning in Barcelona. Grigor Dimitrov won the Bucharest title, his first on clay, to break into the top 15. Ernests Gulbis is fast approaching a career-high ranking after a semi run in Barcelona and a quarter finish in Madrid.

But can anyone break the stranglehold that Nadal and Djokovic have held on the last nine Rome Masters titles?

By the time Nadal reaches Rome, he may already own 27 Masters titles if he defeats Nishikori in the final of his home tournament. His record in Rome has also outdone Madrid over the last decade, and after a slight dip in his invincibility in Monte Carlo and Barcelona, he now looks back to his formidable self—and favourite to take an eighth title on Rome’s perfect clay.

It looks like plain sailing in the early stages, with Gilles Simon or wild card Filippo Volandri in his first match. His first scheduled seed is No14 Mikhail Youzhny or Fernando Verdasco, but it is at the quarter stage that things become particularly interesting.

Nadal is scheduled to meet Murray for the first time since 2011, but the Briton has not only never reached a clay final, he has never beaten Nadal on clay—though the two played a memorable three-setter in Monte Carlo in 2011.

Few will expect Murray to win, but it should provide an important test of where his game sits ahead of Paris—especially as he faces a tricky opener against either Feliciano Lopez or Marcel Granollers, followed by one of the form players of the year, Marin Cilic or John Isner.

For the survivor, the road becomes tougher with No3 Wawrinka heading the second quarter. His first seed is Tommy Haas, who has been contending with a shoulder problem, so the Swiss should advance to a quarter face-off with either Tomas Berdych or Dimitrov in a replay of their Madrid match at the same stage: Berdych edged it in a thriller.

Also a threat in this segment is Madrid semi-finalist Roberto Bautista Agut, making Berdych’s run one of the toughest in the draw: potentially Bautista Agut, Dimitrov, Wawrinka and Nadal—who set a record in beating the Czech for a 17th consecutive time in the Madrid quarters.

The world No2 has already charmed the Rome fans in a packed first practice on Centre Court—against home favourite Andreas Seppi. He looked comfortable, with no sign of the wrist injury that affected him in Monte Carlo and forced his withdrawal from Madrid.

He will need to be in good shape, too, as he begins his quest for a third Rome title and a 19th Masters overall. He will open against either Pablo Andujar or Radek Stepanek, before possibly taking on some crafty clay prowess in the shape of No16 seed Tommy Robredo, Juan Monaco or Philipp Kohlschreiber.

Djokovic’s quarter-final line up contains men who went deep in Madrid: Indeed Kei Nishikori, heading into the top 10 for the first time, may have won the title by the time he arrives in Rome—though he will have to survive a back problem as well as Nadal to become champion in Spain.

Nishikori’s third-round opponent could again be David Ferrer, who he beat in a wonderful contest in the Madrid semis. Ferrer, meanwhile, is second only to Nadal among active players in clay wins, and beat his compatriot in Monte Carlo for the first time on clay since their first meeting a decade ago.

However Nishikori’s test in Rome starts early—in his first match against the surging, charismatic Latvian, Gulbis, who he beat in the semis in Barcelona.

If Djokovic gets past Nishikori or Ferrer, he may set up one of the matches of the tournament, a replay of his semi-final meeting in Monte Carlo last month with Federer. The Swiss won that match, but has lost their previous two in Rome.

There remains, however, a question mark over whether three-time runner-up Federer will play at all—though the home crowd would surely relish a third-round face-off between the Italian star Fabio Fognini and one of their favourites.

If the Swiss stays at home, his place in the semis could be taken by Fognini, Jo-Wilfried Tsonga—though he is on a poor run of form at the moment—or Milos Raonic, and another dangerous name in this segment is Alexandr Dolgopolov. His first-round meet with Tsonga will be a must-see.

Andy Murray seeks coach who will commit ‘a number of years’