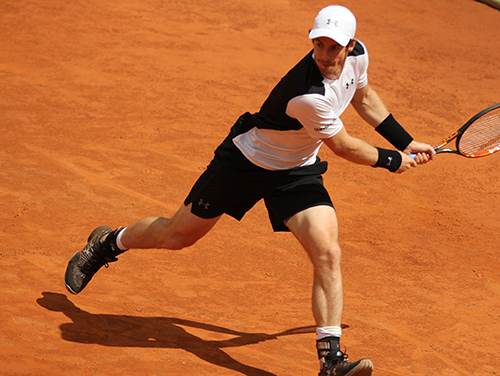 Sometimes a little luck can prove a healthy incentive, and nowhere has that been more evident than in the bottom half of the draw for the Rome Masters.

Start with No4 seed Stan Wawrinka’s quarter. The returning clay expert Juan Monaco, back on the tour after a succession of injury problems with a protected ranking, and with only 13 matches under his belt since last August, first beat No16 seed Kevin Anderson in three sets, then stunned reigning French Open champion Wawrinka from a set down to reach the quarter-finals.

But by this morning, Monaco was incapacitated by a hip injury and withdrew. Bad luck Wawrinka, but remarkable news for another man. Lucas Pouille only made it into the main draw—direct into Round 2—courtesy of the last-minute withdrawal of world No7 Jo-Wilfried Tsonga, having lost in qualifying. His draw was tough, but this fast-improving 22-year-old was making the most of his luck.

Last week, Pouille saved four match points to win his Madrid debut as a qualifier against No13 ranked David Goffin, having also reached his first tour final in Bucharest. Already something of a giant-killer, he beat Richard Gasquet in Monte-Carlo and David Ferrer in Miami—and as if to rub salt into the wound, he beat Ferrer here, too, to reach his first Masters quarter-final.

That in itself promised Pouille a new career-high of 37. Now he was promised still more via a walkover to the semis, even a possible seeding at next week’s French Open. Would this become the fairy-story of Rome? Could he make it all the way to the final?

In his way was No2 seed Andy Murray or another of the form men of the year, Goffin… the very man Pouille beat not just in Madrid but in Brisbane. However the Belgian, who has already made the semis of the two biggest Masters of the year—Indian Wells and Miami—threw down an impressive marker to Murray by burning No8 seed Tomas Berdych, 6-0, 6-0.

But if there was one man in Rome who was proving he could be a threat to the established order, it was Murray.

After back surgery at the end of 2013 to remedy pain that had always been exacerbated on the sliding, twisting clay surfaces, he had gone on to win his first two clay titles in 2015, and this year arrived with a semi run in Monte-Carlo and a final finish in Madrid, having beaten Nadal in the process.

Indeed Murray’s 26-3 record on clay since the start of last year, according to the ATP, put him top of the win-loss index for the last 52 weeks.

Murray admitted in Madrid: “For a number years I didn’t move well on the clay… I believe I can play well on clay now.”

He had enjoyed a little good fortune of his own in Rome, too: He was already assured of a return to the No2 ranking and his first No2 seeding for Roland Garros after Roger Federer, hampered by back injury, was failed to defend his final points here.

Murray also avoided some dangers in the draw: first dangerous teenager Borna Coric, then No15 seed Roberto Bautista Agut. So Goffin was Murray’s first seed, and he had topped the Belgian in all three previous meetings, perhaps most significantly on the indoor clay of the Davis Cup final last November.

Murray expected Goffin to be more of a handful this time, though—he was only too aware of that double-bagel against Berdych. Sure enough the Belgian began where he left off against Berdych, though the court and the conditions were very different: It was warm, windy, and the red dust flew in waves as Centre Court went in out of shade.

It seemed not to bother Goffin—at least not in the first game, in which he broke to love. But different ends would make a big difference, and a change brought an immediate break back followed by a love hold for Murray, plus a swift love break. A straightforward hold, and Murray was 4-1 up, and plying the court with winning drop shots, especially into the wind.

Goffin, so disturbed by the wind and dust, and without the muscle power of Murray to punch through it, nevertheless regathered, and after three love holds, he broke a furious Murray who was convinced, like much of the crowd, that he had made a winner on break point.

But again the wind took a hold on proceedings and each man was broken time and again. Another exchange of breaks and it was 5-5: This would come down to who could hold. Amid swirling dust, that would be Murray, helped by three big serves, 7-5, in just over an hour and a half.

Despite the conditions, Murray made only 13 unforced errors to 19 winners, while Goffin made 28—a drastic contrast with the five he made against Berdych.

So storms may have been forecast for Friday afternoon, but the sun shone on Murray just long enough to carry him to his first semi-final in Rome since 2011—and with an outstanding chance of making his first ever final here. Asked his feelings about making his third consecutive Masters semi-final in a month, he replied with a combination of pleasure and pragmatism.

“I think I’m getting rewarded now for the work that I put in over the years on this surface. Obviously took me time to feel comfortable on it, but I didn’t just give up on clay and say, ‘You know what? This isn’t my surface. I’m not going to prepare for it properly or train hard.’

“I have had good results at Roland Garros in the past but in the Masters Series obviously not played as well. But, you know, I have also had chances to do very well in these tournaments before… I didn’t necessarily expect to be doing as well as I have been the last couple of years, but I deserve it because I have worked hard for it.”

Of that there is no doubt. He was, though, now going to spend time with his baby daughter rather than watch the Rafa-Nole contest. It would, in any case, be many hours before the fourth semi-finalist was resolved between Kei Nishikori and Dominic Thiem.

The wind and rain would have to stay away for a few more hours yet.