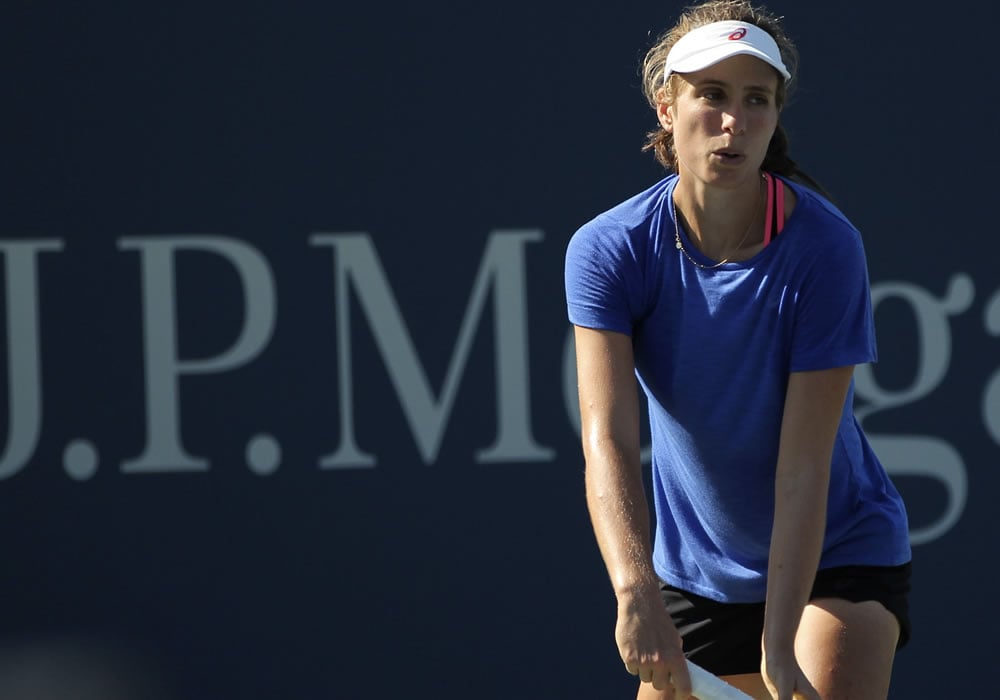 Johanna Konta is through to the second round in Rome Photo: Marianne Bevis

It is one of the most iconic tennis courts on the professional tour, the marble-tiered, statue-fringed Pietrangeli at the centre of the Foro Italico.

Few more elegant places in the world, then, to open a campaign at the Italian Open for the only British woman in the draw of this revered tournament—and few more emotional places for one of Italy’s won, Roberta Vinci, to bid farewell.

Rome has been pretty good to Johanna Konta, bearing in mind her relative lack of success in the big clay tournaments in the women’s calendar compared with grass and hard courts.

That win was over Magdalena Rybarikova, Konta’s third win in three meetings with the Slovak, but the Briton would then lose to the 97-ranked Bernarda Pera in the second round. And that has been the story of Konta’s season so far: a 9-9 win-loss has contributed to a slide from the top eight to a current No23, and outside the Rome seedings.

But in two previous visits to the Foro Italico, Konta has made the third round, and an early piece of luck this year helped launch her into the second round again.

She was originally drawn to face the form woman of the moment, Madrid champion Petra Kvitova, but the Czech’s exertions through consecutive titles in Prague and Madrid, 30 wins for the season, forced her to pull out of Rome. And the rejigging of the draw threw the No17 seed Rybarikova, into Konta’s path.

It proved to be another straight-sets victory, too, 6-4 6-3, though it took an hour and 50 minutes. The two women exchanged breaks in the first set, but Konta broke again, to love, to take the set.

A patchy opening to the second set saw Konta hand back a 2-0 lead as each broke the other, but Konta battled through, despite a slew of unforced errors, to reach Round 2, where she enjoyed another piece of luck. She next faces either qualifier Hsieh Su-Wei or lucky loser Aryna Sabalenka, so another third round should be no problem, but thereafter her quarter is formidable.

The reigning French Open champion Jelena Ostapenko is likely to be that third opponent, and the quarters could bring the unseeded three-time champion Maria Sharapova or No3 seed Garbine Muguruza.

Also here is Dominika Cibulkova, who came through a tough and emotional three-setter against home favourite, the feisty 37-year-old Francesca Schiavone after two hours and 40 minutes. She it is who could next meet Sharapova.

At the top of the same half, the charismatic 20-year-old Naomi Osaka, who burst through the Indian Wells draw to score her biggest title in March, is still ranked just out the seedings, and as luck would have it, drew one of the biggest unseeded stars in the draw, Victoria Azarenka.

But the lack of match-play for the former world No1 showed her fragility, and Osako’s firepower handed out a 6-0 first set. And after an hour and a quarter, the contest was done, 6-3, to set up an even more mouth-watering match between Osaka and the current No1 Simona Halep. It so happens that Osaka beat Halep on her way to that Indian Wells title, also for the loss of only three games, 6-3, 6-0.

There were wins, too, for No13 seed Madison Keys who will next play Donna Vekic in that same Halep/Osaka segment.

But back to Pietrangeli, where Rome bid farewell to one of its favourite daughters, the 35-year-old Roberta Vinci.

She decided at the end of 2017 that she would bid farewell to her impressive career on home soil, and it would end unhappily early in a first-round loss to Aleksandra Krunic.

Vinci and her elegant single-handed backhand reached the top 10 in singles and No1 in doubles with Sara Errani—the duo won all four Majors—but she will probably be remembered as the unlikely and unseeded victor over Serena Williams in the semi-finals of the US Open in 2015. Her win set the even more unlikely all-Italian final with friend Flavia Pennetta—who in her victory speech, retired immediately from tennis.

The same two, along with Schiavone and Errani, would also win the Fed Cup four times. Women’s tennis will be a duller place without them.

Rome Premier 2018: The nuts and bolts