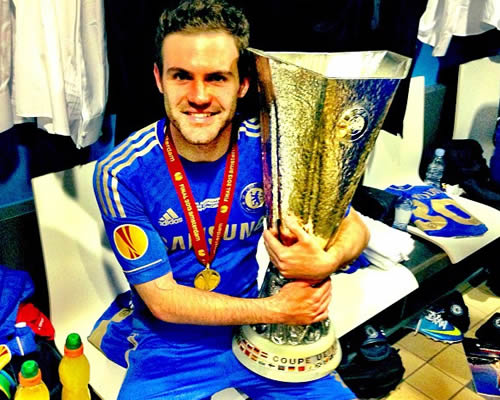 Juan Mata posted this picture on Instagram after the win Photo: Juan Mata/Instagram

Óscar Cardozo levelled from the spot in the 68th minute after Fernando Torres had made the breakthrough in the second half, before Ivanović guided a header past Artur Moraes on the stroke of full-time.

Here is a selection of our favourite tweets from the professionals, both past and present and in chronological order, after Chelsea secured their second European title in as many seasons.

Ex-Tottenham chairman Lord Sugar ‏(@Lord_Sugar) will presumably be watching The Apprentice: “To be honest I could not care less who wins the match tonight Chelsea v Benfica!”

England legend Gary Lineker ‏(@GaryLineker) reckons the Portuguese side will pay for missing so many chances in the first half: “I fancy Benfica may pay for their profligacy. #UELfinal”

Former Newcastle goalkeeper Shaka Hislop ‏(@ShakaHislop) is impressed by the Benfica goalkeeper’s save to deny Frank Lampard: “What a save by Artur!! That replay from the reverse angle really did it justice. I can’t remember seeing a European final this one-sided in ages!! In nearly 12 months.”

Chelsea legend Ruud Gullit ‏(@GullitR) admits his former side are lucky to be level: “Thanks to @benfica is @chelseafc still alive.”

Doncaster Rovers striker David Cotterill ‏(@cotterill_david) reckons he can see a few United fans: “Did I just see Benfica fans with Man United shirts on or was that just me?! #EuropaLeaguefinal”

Swansea midfielder Wayne Routledge (‏@WayneRoutledge) is amazed by an ambitious Lampard effort: “Omg if that goes in from Lampard there…”

Arsenal legend Ian Wright (‏@IanWright0) praises the interim boss: “Delighted that Rafa has shown that class will always rise to the top whatever the obstacles!”

Finally, Juan Mata posts his delight on Instagram: “We did it again! Another European title! Very proud of this team! #EuropaLeagueChampions #Chelsea #ktbffh”