“I’ve had a year out from the sport and to be honest I have not missed it one bit,” says defending champion Ronnie O’Sullivan 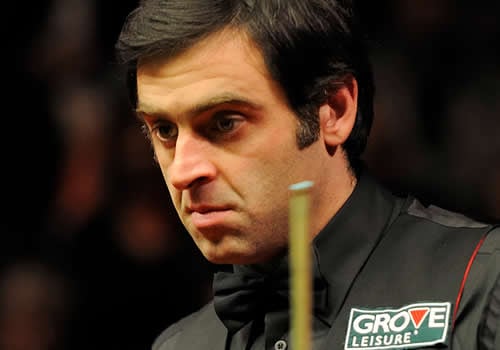 He may have made serene progress through to the world championship semi-finals on Wednesday but Ronnie O’Sullivan insists this is his swansong and we will not be seeing him at the Crucible again.

The defending champion here in Sheffield returned to the sport for this tournament after a year of self-imposed exile to battle his own personal problems.

But after seeing off Stuart Bingham to set-up a marquee semi-final with Judd Trump the Rocket insists he has not missed snooker one bit and he only returned for the money.

With three children to provide for the 37-year-old insists he needed the money for school fees that were adding up and with a winner’s cheque of £250,000 up for grabs it is easy to see why he might have been interested.

O’Sullivan has a chequered history in the sport, indeed after claiming his fourth world title 12 months ago he threatened retirement then before announcing his return in February.

But this time around the greatest talent to ever pick up a cue insists he has no intention of going back on his word.

“I’ve had a year out from the sport and to be honest I have not missed it one bit,” he said.

“I have been fighting with myself but this is it for me, this will be my last major event.

“I needed the money for school fees and I was getting bored so I thought I would come back to try and see how it would feel.

“I wish I could just go out there and enjoy it but I don’t feel the buzz, maybe my standards that I expect of myself are too high but this will be my swansong.

“Maybe I romanticised it a bit when I said I was coming back but I have had to try and keep this under wraps for a while, I wish I could handle it better, my own expectations but I does not make me happy.

“I still have a contract to fulfil with my sponsor so I will play the odd small PTC event so that I hit the ten I am contracted to but that will be it for me.”

The timing of O’Sullivan’s announcement is made all the more strange when you consider that he is set to take on Trump ins a mouth-watering clash that gets underway on Wednesday.

And while his love for the game has all but disappeared O’Sullivan insists his competitive instinct remains just as strong.

“Listen I’m a fighter, I hate losing so Judd will have to go out there and scrape me off the table if he wants to be beat me,” he added.

“Judd is a brilliant player blessed with a fantastic cue action and it will be a great match I’m sure but this will be my last major tournament.”

British Eurosport is the Home of Snooker, showing 19 tournaments this season including the World Championship, UK Championship, the Masters and all ranking events, available on Sky, Virgin Media & BT or online/on mobile via eurosportplayer.co.uk