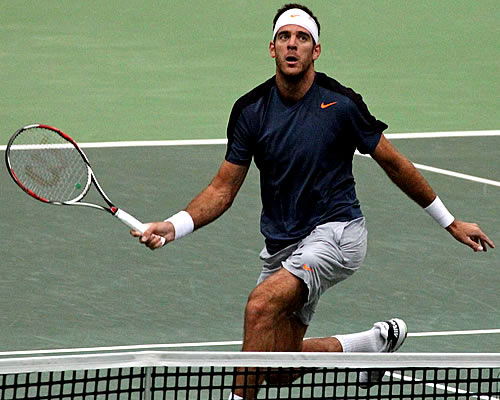 They had never met before, the No2 seed Juan Martin del Potro and the younger man newly into the top 40, Grigor Dimitrov.

It was, therefore, an eagerly awaited contest between the Argentine who won his first Grand Slam at just 20 and the young man—now 21—who, for many tennis fans, is the young pretender destined to challenge the top five just as Del Potro did at the same age at the start of 2010.

Last month, the young Bulgarian dropped just one set en route to his first career final in Brisbane, eventually losing to Andy Murray. He also played high-quality tennis in coming through a tough draw in Rotterdam. Wins over Bernard Tomic, Nikolay Davydenko and Marcos Baghdatis saw him score the highest number of aces in the tournament, 27, sit in second place on first serve points won and in service games won, 40 of 42.

In Del Potro, though, he faced a man who has, without question, been regaining the form that took him into the top four. He had been working his way steadily through the ranks following major injuries to a current No7—and rising. Then there was the issue of his record on indoor courts in the last 12 months: finalist in last year’s Rotterdam, winner in Marseille, Vienna and Basel, and a winner over Federer at the World Tour Finals.

He also talked of the improvements he continued to make to his indoor game: “I’m trying to improve my serve and come to the net more times…basically on this surface, it’s what you have to do…at very important moments, I come to the net and win more points.”

And if Dimitrov’s stats were good, so were del Potro’s: He had not dropped serve once, saving all seven break points he faced.

They both opened with statement serves, firing aces to hold. But in the third game, Dimitrov faced two early break points and—normally showing wonderful touch around the net—fluffed a volley. Del Potro asserted his intent with a strong hold, sealed with the perhaps the biggest cross-court forehand of the tournament, to lead 3-1.

Dimitrov used his full gamut of skills, serving big, chasing to the net, unleashing his right arm into both forehands and backhands. He continued to hold his serve, but it was a battle. Del Potro has not just improved his offensive game but his defence too, and now moves with surprising agility for one so tall. He even tracked down a couple of Dimitrov smashes, making one volley winner so accurate that the place—including Dimitrov—applauded at length.

The tennis cranked up with the score, both showing flat power off the ground but also great slice skills. Del Potro faced two break points in the sixth game, but his infamous cross-court forehand saved both. Despite Dimitrov’s best efforts, he could not pull the score back and his head dropped, just slightly, when Del Potro took the set, 6-4, with a love hold.

The Bulgarian had no cause to be down-hearted: His serving performance was almost the equal of del Potro’s. And the second set would not be much different—separated by just three points.

The opening couple of games this time were a little patchy—a few more errors, a little more caution—and it was two straight errors on the Dimitrov backhand that offered up the only break point of the set and del Potro seized his chance.

That seemed to relax the Argentine and he upped his serve to 130 and added in a brilliant off-backhand winner. It’s a clear sign that he is feeling confident when he grunts into his forehand, and he pounded ball after ball at that wing to consolidate his break, 3-1.

The Bulgarian, though he must have begun to feel the endeavours of his two-and-a-half hour quarter-final match in his body, did not back off, held his own serve to love and his next serve to 15. But with the break already on his side, the laconic power of the Argentine was headed to the winning line and took a 5-3 lead with two aces. Appropriately enough, he won set and match, 6-4, with his signature cross-court forehand.

He afterwards talked of needing to play better tomorrow—not preferring either Gilles Simon or Julien Benneteau:

“They both play well on the hard courts, they are fast, it’s going to be difficult whoever I play. In the finals, I will play my own game, I need to play better, try to be more aggressive than today.”

This modest powerhouse from Argentina talks always of trying to improve: “The matches are tougher and tougher and the risks are higher—I need to play 100 percent and don’t give my opponent a chance to break.”

From the man who has yet to concede a break, that is a very intimidating prospect. One feels that his third indoor title in four months is there for the taking.

He admitted afterwards: “I didn’t reach the level of my match against Federer, but I don’t care, I’m in the final.”

Despite so many previous finals, Benneteau has yet to win a title.