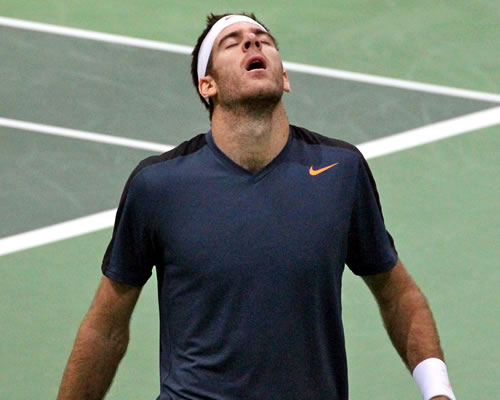 The odds may have been stacked against the 31-year-old Frenchman Julien Benneteau, but even the most hard-hearted of tennis followers would surely have found a sympathetic corner that wished him well when he took to court at the ABN AMRO tennis tournament in his eighth final.

He was one of the least likely of the seven French players in the draw to make it all the way to the last day, especially with defending champion, Roger Federer, lined up to be his quarterfinal opponent. But Benneteau had upset Federer before, and he did so again, downing the top seed with some remarkable power play interwoven with bold net work to record his 200th tour-level win.

Even with the No3 seed, compatriot Jo-Wilfried Tsonga, out of the way in the semis, Benneteau still faced world No14, Gilles Simon, ranked 25 places higher than himself and renowned for wearing down even the freshest legs.

But Benneteau overcame the odds again, winning through in two long sets to reach the final. And that was where he deserved the sympathy vote. For after so many finals and 13 years on the pro tour, the Frenchman’s trophy cabinet remained empty. Indeed no other player on the tour remained unrewarded so often.

And he faced a mountain as great as any in the draw, the second seed Juan Martin del Potro, last year’s finalist who had since won no fewer than three indoor titles: in Marseille, Vienna and Basel.

His win over Federer at the World Tour Finals took his indoor win-loss tally for 2012 to 24-4, and he seemed to be getting better with each indoor campaign. In Rotterdam this year, Del Potro had thus far not dropped serve—40 games without a break—yet still talked of needing to play better and of fine-tuning the serve-and-volley skills that had been so in evidence.

A mountain, then, for Benneteau, but the Frenchman was riding his own wave of confidence: “Against a top ten player like Del Potro I’ve got nothing to lose. Rotterdam is a nice place for my first tournament win.”

He played like he spoke, too, opening just as he did against Federer with disruptive patterns of play—a drop-shot winner in the opening point, as an example—and broke straight away to lead 2-0.

In the third game, though, the tussle for control from the baseline began in earnest as Del Potro began to get some rhythm on his fearsome forehand, and he converted a break point to quickly level things again. He kept up the onslaught to both Benneteau wings to break again, and took the lead with his first love service game, 4-2.

Del Potro looked in control, now, especially with more break points in the seventh, but Benneteau remembered the tactics that had got him this far, threw in a serve and volley, made a lob winner and held.

Still the set looked inevitable with a hold from the Argentine to 15 and two more chances to break, but Benneteau dug deep, produced three aces and held, only to turn the tables on Del Potro.

Benneteau worked two break chances of his own, attacked the Argentine serve to force the error and broke to level at 5-5.

Now the packed crowd was abuzz: This was probably not the scenario that many expected—a tie-break.

Benneteau opened with an ace, too, but did not get another point until facing five set points in the face of terrific serving. A French backhand error concluded the set in the Argentine’s favour, 7-2.

From then on, Benneteau began to look as though he was holding back the tide. The opening game illustrated the point. Two weary backhands into the net brought up break points and he double-faulted to conceded the break.

Ten minutes into the set, del Potro was 3-0 up, and while Benneteau fought to hold his serve, the Argentine seemed to take a tighter grip. A 215 km/hr ace took Del Potro to 4-1, a backhand winner down the line made it 5-2.

At 0-40 down, and serving to save the set, Benneteau had one last flurry to fight off four break points and he held for 5-3, but all at once it looked as though the match would take an unexpected turn.

Del Potro called the trainer for a nose-bleed—he had suffered one here a couple of times last year, too. The crowd filled the waiting minutes with a Mexican wave that rippled around the huge Ahoy arena half a dozen times before the Argentine was fit to return—his right nostril plugged with white padding.

It proved to be a minor inconvenience. He served better than ever, taking his tally to 13 aces for just one double fault. He took the decisive game to love and the match, 6-3, for his 14th title.

For Del Potro, this was one more step up the ladder, one step closer to what has been the near impenetrable top quartet. For now, he is on the verge of creeping ahead of Tomas Berdych into No6, but it is surely only a matter of time until he returns to the No4 ranking he reached three years ago.

For Benneteau, the wait for a title continues. He told the crowd: “I did my best today but he was just better than me.” Then, turning to his player’s box, he added “It’s not enough yet, but we’re getting closer and closer—I’m sure I can win this year.”

He was asked afterwards if he can continue this form and rise further up the rankings. His answer was straightforward: “Of course.”

For his all-court, bold and brave tennis this week, he certainly won new fans and new respect in Rotterdam. Clearly, here is another man for whom age is no barrier.