Rotterdam 2013: Marcos Baghdatis beats France's Richard Gasquet 6-4 6-4 in the second round of the ATP 500 event 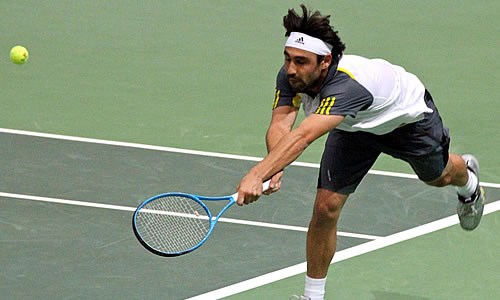 The early indoor season is showing a distinct liking for Gallic flair.

In the first week of February’s indoor swing, Montpellier saw five French names in the quarters, filtered down to three in the semis, and the title won by Richard Gasquet. And already, at the big ATP 500 event in Rotterdam, two have advanced to the quarter-finals and a third waited to join them.

There could have been more, but two of the French pack fell by the wayside with illness: the oldest at 32, Michael Llodra did not make the starting blocks, while the youngest, Benoit Paire—the other finalist in Montpellier—was forced to retire in the third set.

It was Gilles Simon who became the first quarter-finalist, dropping just four games to qualifier, Matteo Viola. Next was another veteran of the tour, Julien Benneteau who, at aged 31, reached a career-high ranking of 26 last year. And as if not to be outdone by Simon, he too dropped just four games.

Benneteau is the kind of player who can turn the tables on the very best, producing the kind of all-court tennis that pushed No8 seed, Janko Tipsarevic, to five sets at the Australian Open and took a 6-1 first set from Gasquet in the Montpellier quarters. More significantly, he has also troubled Roger Federer in the past—and Federer is scheduled to be his next opponent. Four years ago, Benneteau beat the Swiss in the Paris Masters, and in their next meeting, Wimbledon last year, he took the first two sets before Federer survived a fourth-set tie-break and went on to win the match.

And there is always something a little special about French tennis. From the serve-and-volley flair of Llodra to the dogged baseline resilience of Simon to the all-court charisma of Jo-Wilfried Tsonga, a resident in the top 10 since 2011 and with a Grand Slam and World Tour Finals runner-up trophy to his name, they prove that one size certainly doesn’t fit all.

They spread their favours across surfaces, too. Jeremy Chardy, enjoying a career high of 25, reached the quarters of the Australian Open but is currently playing the ‘golden swing’ in South America and won his only title on clay. Simon’s 10 titles have been shared between the red dust and the hard courts, indoors and out. Tsonga has reached Grand Slam semis at both Wimbledon and the Australian Open.

And if one man encapsulates this diversity, it is world No10 Richard Gasquet.

His first title came almost eight years ago, just as he turned 19, on the grass of Nottingham, but his nine titles from 19 finals have come on all surfaces, indoors and out, including three Masters finals.

This year illustrates the point: As well as the Montpellier title last week, Gasquet has already won outdoors in Doha, and with his impressive performance over Viktor Troicki here in Rotterdam, he has notched up a 15-1 win-loss record this year.

Gasquet showed his prolific talent early, hitting the tennis world between the eyes in Monte Carlo in 2005 when he beat Federer in the semis and took the first set from Rafael Nadal in the final. Indeed early comparisons were made with Federer, not least because his attacking flair, his single-handed backhand and the variety of his game.

He reached the semi-finals of Wimbledon in 2007 and peaked at a career-high No7 in 2008 but gradually seemed to buckle under the burden of expectation. He fell out of the top 10 in 2008 and briefly slipped outside the top 50 three years ago.

Yet over the last couple of years, Gasquet has steadily and quietly begun to reassert himself. With a fresh coaching set-up, improved physical conditioning and apparently growing confidence, he reached his first Masters semi in four years in Rome in 2011, his first Masters final in six years in Toronto last year, and just broke back into the top 10 for the first time in almost five years.

After beating Troicki, he said “With each victory, my self-belief grows. A disadvantage is that after so many matches I start to feel a little bit tired. But that’s a luxury.”

But if he was to join his compatriots in the quarters, he needed to beat another Grand Slam junior champion who blossomed young, Marcos Baghdatis. The Greek Cypriot reached the final of the Australian Open in 2006 and a ranking high of No8, but had been unable to match his early results.

Now ranked 36, though, the fitter, slimmer Baghdatis has also shown signs of rejuvenation. What’s more, he has the kind of fast game that can disrupt the Gasquet rhythm. They had only played twice before but Baghdatis has won both, most recently at the London Olympics.

Again, Baghdatis came out of the blocks fast, breaking Gasquet in the opening game as he fired two passing shots past the Frenchman. He held his own serve, twice making drop shot winners, and held his advantage through the set until the eighth game.

It could have been a turning point. Eight deuces yielded three break chances for Gasquet, as each went for the lines and both broke their net-rushing pattern of the match, fearful of being passed. It was edge-of-the-seat stuff but finally Baghdatis held and went on to take the set, 6-4.

The second set opened just the same, with Gasquet going 0-40 down from three straight errors. He pulled it back to deuce but on the fifth break point, Baghdatis played a perfect drop-shot-lob combo to take a vital lead that he never lost.

Gasquet faced and withstood four more break points in the third game while Baghdatis faced none, and the Cypriot pressed on with aggression, and not a little energetic defence, to serve out set and match to love, 6-4.

He put his finger on one key factor in the match, reluctant to claim all the credit for his win: “Richard was not at his best today, he’s feeling a bit tired from last week.”

Certainly Gasquet began to look more weary as the match went on, though he is scheduled to join fellow Frenchman Benneteau in the doubles much later this evening.

So the bottom half of the draw, with No4 seed Gasquet defeated, is now devoid of its three Frenchman and all the seeds except for Juan Martin del Potro.

Simon and Benneteau are left to carry the tricolour in the top half, and it is not just the latter who has caught Federer out in the past. Simon has a 2-2 head-to-head against the Swiss, and also took Federer to fives sets in the Australian Open in one of the Swiss man’s victories.

First, though, Federer had to beat home player Thiemo de Bakker later in the day.