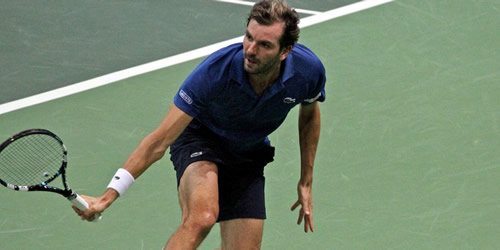 Julien Benneteau will take on Gilles Simon in the semis Photo: Marianne Bevis

Roger Federer had been the hot favourite—give or take a certain Juan Martin del Potro—to defend his title in Rotterdam.

His chances, and the hopes of the majority of fans in the Ahoy Arena, increased further with the defeat of the biggest seed in this half, Jo-Wilfried Tsonga, in the first round and then the seed he was scheduled to meet in the quarters, Jerzy Janowicz.

But lurking in his quarter was another dark horse—dark, because he had caused Federer palpitations before. The top seed had lost to his fellow 31-year-old, Julien Benneteau, in the 2009 Paris Masters. Then he famously went two sets down in the third round of Wimbledon last year, survived a fourth set tiebreak and was helped to a win when Benneteau suffered a muscle pull in the final set.

What’s more, while Federer rose back to No1 in last July, the Frenchman was also enjoying something an Indian summer with a career-high ranking of 26.

Currently at No39, he had proven he was in great form, losing only nine games in reaching the quarters, and Federer recognised the threat when he pointed out ahead of the match that he chose to think about the 2012 Olympics, which he won 6-2, 6-2, rather than dwell on Wimbledon or Paris.

The problem was, Benneteau remembered Paris very well, and come out playing the same big, first-strike tennis that overwhelmed Federer on Wimbledon’s grass.

There was some initial confusion over the coin toss—Federer seemed uncertain whether he had won it or not. He had, and chose to serve, but he looked just as confused by the initial barrage that Benneteau unleashed. When he attempted to take the net, the Frenchman did the same and came off the better.

The Federer serve was one of the culprits: He made just 57 percent of first serves and won only three of his 14 second serves. He shook his head, though in fairness to his opponent, Benneteau was playing at a near-perfect level—the kind of aggressive tennis that almost makes its own luck. Lobs dropped on the lines, net-cords went his way and his confidence was palpable. It was what might be called a ‘Rosol’ moment, and just as Rafael Nadal could do nothing about it at Wimbledon last year, nor could Federer.

The harder the Swiss pushed, the worse it seemed to get. Now serving second, he was broken in the fourth game courtesy of three straight errors. At 1-4 down, there looked like no way back unless the Benneteau level dropped.

Suddenly, mid-set, there seemed to be a tide change. Federer held to love for the first time in the match, and then unleashed a sequence of forehands to break to love. But as quickly as the purple Federer arrived, he went again. He held the fourth game by the skin of his teeth, having pushed a volley wide and then double faulting. Benneteau showed how it should be done, firing two aces on the way to a love hold.

Another window opened a crack at 5-5: Federer went 40-15 up on Benneteau’s serve but that trusty French delivery produced a winner and then an ace, and Federer overhit a reply on a second serve—a very rare occurrence.

It prefigured a poor final game, a whimper rather than a bang. Federer double faulted to bring up one last break point, forced a backhand long, and the match went to France, 7-5.

If joy could be bottled, Benneteau could have made his fortune. He could barely believe what he had done, how well he had played, and it earned him a deserved place in the semi-finals—his second of the season, but this time in a prestigious 500 event.

Federer afterwards conceded: “Julien played great, created many more chances than I did and totally deserved to win…Obviously being broken so many times indoors is not going to get the job done.

“When I had a chance at the end I didn’t take it, but I would have been a bit fortunate to get there. So the better man won today. He deserved it…He’s a guy who takes big cuts at the ball, keeps coming in, that’s how indoor tennis is played and he did a good job at that.”

Federer’s duties were still not done. He shared the press room with the seven-time world squash champion, Nicol David, there to publicise Federer’s support for squash’s selection at the 2020 Olympics. He leaves town tomorrow and plans, he said, to fly to South Africa to visit one of his Foundation’s projects. Then it’s to Dubai, his second home, to attempt his defence of another title. And thus life goes on in Federer’s world.

For Benneteau, it is, he hopes, onwards and upwards. This was his 200th career win, “without a doubt one of my greatest victories.” But his ultimate target—if he can maintain the same outstanding form—is a first ever ATP title after reaching seven finals—no mean achievement at 31.