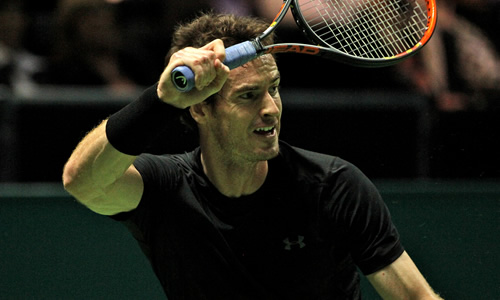 Wednesday was the day that the big names came out to play in the Netherlands: the two Grand Slam champions in the draw, Andy Murray and Stan Wawrinka.

Andy Murray had hoped to get his feet used to the Centre Court before embarking on his campaign here this year but his partner pulled out of their doubles opener with illness.

Even so, Murray had played plenty of practice sessions around the Ahoy complex since arriving on Saturday, and had made light of a packed schedule that concluded only last week with a final run to the Australian Open and would take off immediately after Rotterdam with a switch back to the hot outdoors in Dubai.

It was a rowdy day to begin, too: Kids’ Day, when the always-lively open environs of the Ahoy arena become even louder than usual. Murray is popular, too, a former champion here in 2009 who has already endeared himself to the fans with a keepy-uppy session on the practice courts.

Not just a champion in 2009, Murray also reached the quarters last year, and it looked an uphill task for his first opponent, qualifier Nicolas Mahut, to challenge him this time around, not least because the 33-year-old Frenchman had only made it to the second round here twice before. 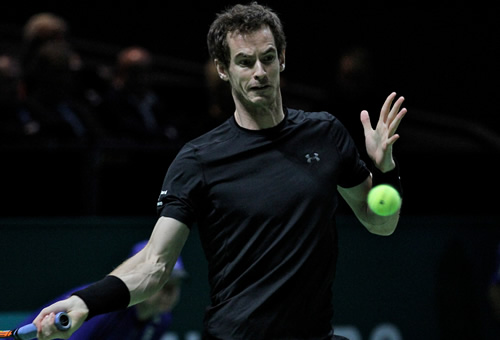 But Mahut can be a wily player, with great net skills and an old-fashioned attacking mind-set. His one victory in four meetings with Murray had come on the fast grass of Queen’s Club in 2012—and there have been signs aplenty in Rotterdam this year that attacking tennis has been paying dividends.

It proved to be a hugely entertaining match, with the contrasts between the two men’s playing styles making for variety, great rallies, net points, lobs and some cracking passing shots.

They began on even terms, both serving well, and Mahut chasing to the net at every opportunity: serve and volleying, chip and charging. Murray, one of the fastest players around and able, it seems, to chase down any ball, defended superbly, and hit what would become a stream of winners past the advancing Mahut.

It only took the Frenchman to miss a few first serves and Murray was able to go on the attack, and that brought the only break of the set for a 4-2 lead. Murray was serving too well for Mahut to return the favour—he dropped only five out of 25 serves—and he sealed the first set with an ace, 6-3, in 35 minutes.

The score in the second set, seen retrospectively, will look like another straightforward affair: Murray would break three times and was on the verge of a whitewash 6-0 until Mahut broke back and held serve for 5-2.

But that simple overview hides a multitude of tightly contested games won by a hair’s breadth here and there, often the result of a challenge when the ball clipped the line or fell just out.

Then the Frenchman returned the favour—well almost. Murray defended two break points and four deuces in the second game, and was close to a being broken but for a leg-busting chase to make a forehand cross-court winner past Mahut who had, for the umpteenth time, ghosted into the net.

Murray chased down another, this time a short drop shot, to fire a winner down the line. The more it happened, the broader the grin on Mahut’s face in disbelief.

The next break came more easily, but Murray again had to fight off a break point to go 4-0. Mahut almost got on the board in the fifth game, surviving three deuces, but then fell foul of a perfect lob on break point: 5-0

The set ended as it had begun, with a long, gripping game as Mahut cranked up a string of break points. He got his reward when Murray double faulted, and then held, too. But Murray would not be denied again: He served it out 6-2, in a set that lasted almost an hour, comprised 78 points, and ended with a long and warm chat at the net.

Yes, it had been fun, and certainly played Murray into the court ready for a very different challenger, the big and big-hitting Vasek Pospisil.

Murray was happy with many aspects of the match, particularly his sharpness.

“It’s a different kind of match to what you normally see these days, also to play against, so I had to be pretty sharp and had to move well and pick my targets well, and I did a good job of that at some important moments in the second set.

“I thought it was good level. Obviously the match today I was pretty on it from the beginning—I felt quite sharp right from the off.”

He liked the conditions, too: “The conditions are pretty fair, you can play from the baseline if you want, you can come forward, it takes the spins pretty well.”

All of which will be factors against his next opponent, who has a wide range of skills at his disposal: “[Pospisil] serves well and he’s a good athlete, so it will be tough.”

Tough, yes: fast and powerful, too. And probably just as much fun as today’s lively opener.