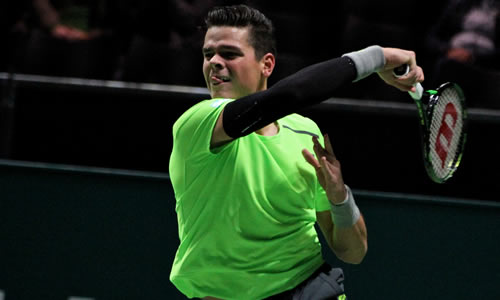 The big 24-year-old Milos Raonic has led the young Canadian charge since he began his winning ways almost four years ago with the first of what has grown into six titles.

He began back then with a huge serve, followed by a massive forehand, but these days he is steadily evolving into a player who can head to the net, can defend with slice, and has enough mobility to play extended rallies.

Now with two Masters finals to his name, a semi run at Wimbledon last year and his first quarter-final finish at the Australian Open under his belt, as well as a strong challenge to Roger Federer in the Brisbane final, he has ventured indoors to capitalise on what he regards as his favourite surface. He did, as he pointed out, spend his junior years playing the Canada indoor circuit.

Raonic was due to make his debut in Rotterdam last year but was sidelined with an ankle injury between Australia and Indian Wells. Now he is delighted to be here, even though he faced a big test in his opener against a man two months his junior who plays a very different style of tennis.

Andrey Kuznetsov is four inches shorter and 27 kilos lighter than Raonic, a nimble, fast man who is more than happy to ghost to the net, and slice and dice his way through big shot-making,.

Against the odds, Kuznetsov won the opening tie-break, but Raonic stormed back to take the second, 6-1 in 23 minutes without dropping a point on his first serve. Again the big Canadian had a fight on his hands in the third but made the only break at 5-5 to serve out the match, 7-5.

It was that very resolve and determination that Raonic highlighted as one of the keys to his win, and key to his improvement over the last year.

“I was happy with the way I was able to fight today. I believe [that] is one of the big things that I find within myself, that can get me through a lot: I’m quite mentally tough.

“I don’t believe it’s always seen because of the way I play. Some players, they will grit it out through 20 shots, but my goal is to stay out of that situation. I believe the way I’m able to buckle down and be disciplined with myself in important moments helps me through a lot.”

It shows in his body language and in his thoughtful, considered responses to questions, but he revealed that he was once held back by occasional self-doubt.

“I think I’ve always had the ability, but not always been able to find the way to access it. I have a big belief in myself, a big understanding of what I need to do, [but] I would just sometimes allow myself to get a little bit too negative and instead of focusing on in the moment, I would focus on too many things out of my control and get in my own way from competing well.”

Raonic has the chance to put on some decent points ahead of the big Masters double-header in Indian Wells and Miami, so a deep run at this 500 backed up by another indoor event in Marseille next week could see him challenging for a new career-high No5.

It is clear that he still believes there are improvements to come. He has worked with former world No3—and also a big server—Ivan Ljubicic since 2013, and last year took on the man who coached Ljubicic during his heyday, Riccardo Piatti.

Raonic talked of the subtle improvements that he, the first and still the youngest, of the ‘generation 1990’ to make it into the top 10, could still make.

“I don’t set any limitations on myself, I believe I can play well on all surfaces. I believe I showed that last year [when] I had my best result on clay.” He reached the French Open quarter-finals in 2014.

“As long as I keep improving, I think the results will keep coming, and I feel like I have drastically improved in this off season and in the last 14 to 16 months, so I really look forward to challenging myself.

Having survived a testing debut on Rotterdam’s courts, he faces next the in-form Simone Bolelli, and is in the same half as Stan Wawrinka and Grigor Dimitrov. But it will take good tennis from everyone else to get the better of his strong-bodied and strong-willed man.