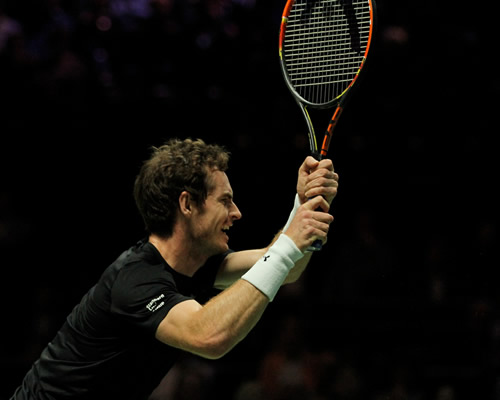 If the defending champion Tomas Berdych faced one of the most unpredictable tennis players on the tour in Gael Monfils, the top seed Andy Murray faced arguably the polar opposite in Monfils’ compatriot Gilles Simon.

The 30-year-old Simon is a former world No6, currently No19, and renowned for his physical endurance, his nimbleness around he baseline and his ability to maintain precise and metronomic levels of play until the cows come home. The wiry Frenchman may not possess the killer winning shots of the taller and more athletic Monfils but he is a hard man to beat.

Not that Murray should have felt unduly concerned based on their past record: Of 13 matches, he had won the last 12. What’s more, Murray had been making rivals sit up and take notice since his final run in Australia and a return to No4. Here was a Murray who looked as fit and sharp as the one who won Wimbledon before succumbing to back surgery just over a year ago.

This week, he was the only remaining seed among the five yet to drop a set, but he knew he now had to adapt to a very different game from that of previous rounds against serve-and-volley Nicolas Mahut and the all-court power of Vasek Pospisil.

Murray summed up Simon’s qualities: “Gilles is an exceptional mover, retrieves a lot of balls, has good timing.

But Simon was confident about his chances: “My coach Jan knows [Murray] well and has helped unblock me against him. I played much better against him in the past two matches even though I ended up losing them. He’s obviously a very strong player who always finds a lot of solutions.” 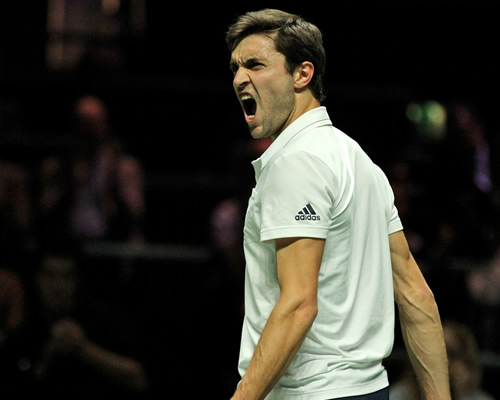 Gilles Simon is through to the semi-finals in RotterdamPhoto: Marianne Bevis

Those last two matches, on the clay of Madrid and the hard courts of Acapulco, both went to three sets and both contained tie-breakers. Their latest meeting would be a good indicator of the form of both.

Even allowing for a tweak in Simon’s tactics, it was hard to explain the lack of rhythm and the number of errors that came from Murray’s racket. He would normally expect to outlast and outmanoeuvre Simon from the back of the court, serve the better and break up the patterns more easily than he seemed able to do on this occasion.

But from the off, Simon was in control on his serve and through rallies, whether long or short. And the rallies, as is so often the case with both men, formed chess-like patterns, flat and accurate to the lines, until one made an error. Too often, it was Murray who made the mistake.

Simon broke quickly to love and then benefited from two backhand errors from Murray on break-back points to take a 2-0 lead. Simon broke again in the fifth as Murray netted a volley and took a 5-1 lead—and he looked easy in body and mind. Murray, in contrast, looked frustrated, but when he managed to break back, and then held from deuce, it looked as though the Briton had at last found some rhythm.

Still Simon held on, and the first set was done and dusted, 6-4. The Frenchman showed his first real sign of emotion, a roar of satisfaction to his box, and not content with that, broke Murray’s serve in the first game of the second set.

Murray looked totally at a loss as to why his forehand, his serve and his drop shots were failing him, though the main culprit was Simon, who pressed on, playing accurate and persistent rallies through his own serve and on towards another break, 4-0.

If there was one waver in concentration from Simon, it came now, offering back a break as he double faulted for the only time in the match and then Murray conjured up a rare lob winner to pull back a break.

Yet the Briton could not ride the moment, continued to miss first serves, hit backhands wide, conceded another break with a dreadful drop-shot attempt into the net. One last glimmer of hope, a break point chance in the last game, came and went with a wild volley error and Simon scored a famous victory in under an hour and half, 6-2.

The statistics were eloquent enough, painting a dismal picture of Murray’s performance but a typically tidy one of Simon’s. Murray hit 15 winners to 27 errors; Simon 19 winners to 12 errors. And it was the errors to which a subdued Murray referred afterwards:
“I struggled with most of my shots at the beginning of the match…. It was tough it felt like I was hitting the ball too early… I felt like my timing was a bit off. But no, I didn’t feel tired.”

And also explained how effective Simon’s play can be: “He likes to extend the rallies, moves very well, and he doesn’t make too many mistakes: He’s very effective with that style of play… but I felt like when I trying to be a bit more aggressive or getting into longer rallies I was making mistakes.”

Simon, not surprisingly, was delighted to end such a long losing run.

“It was good. It’s always tough to play against Andy, I lost the last 12 matches so I know what I’m talking about! In the last match I had a lot of opportunities against him but was not able to finish the match. Once again, it was hard in the end but overall it was a great match.

“When you play a player that many times, you know him by heart and it’s hard to make the difference, but I feel more and more comfortable every time I play against him. He’s such a great player but I’m not scared any more. When you lose 12 times in a row, you just go and try your best to win, and that’s what I did today.”

Against Berdych, Simon has a rather better record, 6-3, though they shared the last two meetings, both of them in three sets. He referred to their last in Shanghai as ‘a very, very nice match’, one that saw him reach the final of a Masters for only the second time in his career. It could be a cracker.

Murray, meanwhile, plans to take a few days rest before heading back to the practice court in preparation for his trip to Dubai next weekend.