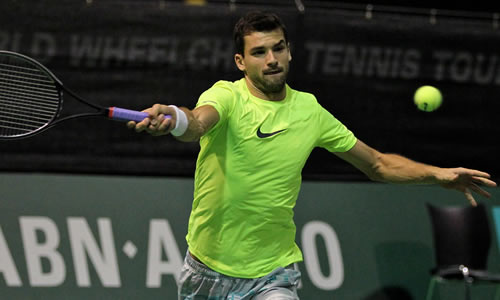 The Rotterdam draw is an impressive one, boasting four top-10 men among nine top-20 players.

But there is also a great blend of age and experience versus youthful talent. Two of the top five seeds, Milos Raonic and Grigor Dimitrov, are among that growing band that belongs to the ‘90s generation and is marching up the rankings—and both, along with No20 David Goffin, won titles last year.

However the draw also holds a host of over-30s who are attempting to follow in the footsteps of the ageless Roger Federer, who won the title here in 2012 as a 30-year-old.

Gilles Simon is ranked 19 and the No8 seed, Philipp Kohlschreiber is ranked 22, Guillermo Garcia-Lopez, who won his latest title this weekend, is up to 27, Julien Bennteau is close to his best at No28, Andreas Seppi, Zagreb finalist on Sunday, is No35, and Gilles Muller is at a career-high 37. None of these will see their 30th birthday again, nor will Nicolas Mahut, Edouard Roger-Vasselin, or Paul-Henri Mathieu.

Even seed No4 seed Stan Wawrinka turns 30 next month and No3 seed and defending champion Tomas Berdych in September.

So how would the generations fare when pitted against one another, as they are several times over in the first round?

Perhaps the most popular of the new stars, and the one who has had expectations piled on his shoulders since winning the junior Wimbledon and US Open titles in 2008, is Dimitrov. His rise has been steady and constant, making his biggest surge with a semi run at Wimbledon last year, and his game has evolved into one of the most elegant and varied among the 90s generation.

I think I was a little rusty, but it feels good to be back

He reached the semis here in 2013, but he came perilously close to falling at the first hurdle this time against one of those 30-somethings, Mathieu. The Frenchman got the better of him in their only previous meeting, in two tie-breaks in Basel in 2012, and this was just a tight.

It looked as though Mathieu was in control against a Dimitrov who sprayed errors for the better part of two sets, but the Bulgarian turned it around as the Frenchman twice served on match-point. Mathieu could not find a first serve and was punished with some timely scorching returns. Dimitrov broke back and grew ever stronger through the tie-break and the deciding set, 4-6, 7-6(2), 6-2.

Dimitrov afterwards told ATPWorldTour.com: “I’ve practised with him quite a few times in the past, and I knew it was not going to be easy. At the same time, I feel like I overcame a lot of obstacles on the way. I think I was a little rusty, but it feels good to be back. I definitely need to step it up in the next match.”

That next match is against another late bloomer, Muller, who dispatched the 24-year-old Goffin. The young Belgian is standing at a career-high 20 after surging back from injury last year to win two titles from three finals. He also reached the semis in Chennai at the start of the year, but despite firing down 19 aces and winning all but six of 68 first serves, he succumbed after two and a quarter hours, 7-6 (5), 6-7 (6), 6-3.

Not until the final set did either man break, and it was the 31-year-old, making his debut appearance in Rotterdam, who made the breakthrough.

The next morning, though, the well-worn boot was on the other foot for the ever-dangerous Kohlschreiber, who came up against another of that new generation, the impressive and compelling Vasek Pospisil.

The personable Canadian has been afflicted by various neck and back problems since breaking the top 30 at the end of the 2013, the year in which he made a great run to the semis of his home Masters in Montreal where he fell in three tough sets to compatriot Raonic.

Pospisil went on to push Federer close in the Basel semis, and last year reached his first final in Washington—again coming up against Raonic. Not content with making a splash in the singles, he joined forced with Jack Sock to win the Wimbledon doubles title. However, after an arduous training block during the off season—seven hours and day, six days a week for six weeks—he has determined to renew his focus on singles.

2015 is showing some reward for that commitment, too: Pospisil looks stronger and fitter than ever. He reached the third round at the Australian Open, and in his first visit to Rotterdam, he demolished Kohlschreiber’s crafty game with power, speed, forays to the net, and considerable style.

It took him a scant hour, 6-4, 6-2, and he won a lot of new Dutch fans into the bargain: “Overall I didn’t seem to do much wrong today, which I would like to do every day but it’s not always easy! To be honest I love this tournament. I’ve been telling my coach all week how great it is and I have a good feeling overall.”

Sporting a bright orange shirt, he added: “I’m trying to get the crowd support with the colours!”

Pospisil will next play either top seed Andy Murray or veteran Mahut, with whom he played doubles this week. Pospisil and Mahut lost out to the top doubles seeds in their opener, but it’s tough to see Mahut reversing that trend when he meets Murray tomorrow.

Pospisil, though… he could give Murray a real run for his money.