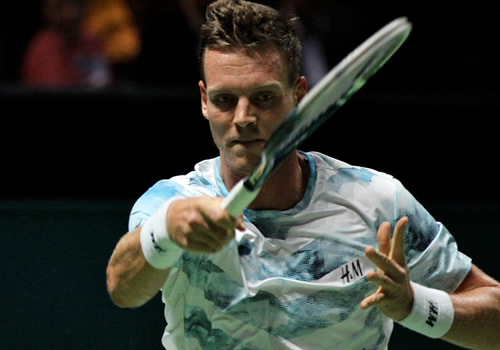 The quarter-final schedule at the first ATP 500 of 2015 in Rotterdam is certainly living up to its reputation and its 500 status.

All four of the top seeds, all of them ranked inside the top 10, have made the grade: Andy Murray, Milos Raonic, Tomas Berdych and Stan Wawrinka.

And that is not where the good news ends. Two of their opponents are former top-10 players, both making returns to form: Gilles Simon, a former No6, is now at 19; Gael Monfils a former No7 is back to No21 from a slide outside the top 100.

Even the remaining pair had much appeal. Gilles Muller had just reached a career-high 36 after one of the best starts to a season in his 31 years. Sergiy Stakhovsky, a former No31, is a player who can turn on the kind of flair that upset even Roger Federer at Wimbledon in 2013. He may be the lowest ranked player in the quarters but he had also dropped the fewest games to get there.

But arguably it was defending champion Berdych, looking to win back-to-back titles at a tournament for the first time in a long a consistently high-achieving career, who had the toughest job. Monfils, the ultimate showman, can turn on tennis of spectacular quality and style, that is in stark contrast to the cool, powerful, clinical precision of the big Czech.

Berdych led the Frenchman 3-1 but their last meeting, at Roland Garros in 2013, belonged to Monfils after a five-set, four-hour marathon. Berdych though was certainly in fine form this year, with a Doha final run and a win over Rafael Nadel to reach the semis in Australia.

But his match against Andreas Seppi here yesterday saw the Czech dip after a strong start, though he came back strong, and he carried on where he left off in a clinical demolition of Monfils in a 23-minute opening set in which he notched up 12 winners to the Frenchman’s three—and made just three errors. He dropped only two points out of 15 first serves, cranked up to 212kph on the speed gun, and looked entirely and cooly dominant.

His rhythm and composure were broken in dramatic style at the start of the second set when he fell heavily racing forward for a Monfils drop shot. It crushed his left hand, drew blood on his right knuckles, and shook him up.

I’m happy with the way I handled it today

He was helped to his feet by Monfils and the medic was summoned, not that he could do a great deal for the tweaked palm of Berdych’s hand. The Czech simply got on with it, matched Monfils in some sizzling hustles around the net, and broke open the French defence with flat and accurate power down the lines. His average ground-stroke speed was up to 121kph: It was impressive.

Berdych broke in third game and survived three deuces in the fourth to go 3-1, and that was enough to seal the match and reach a third straight semi this year.

Monfils did not play badly here, but he was rarely given the space or time to perform at his best. He hit 17 winners to only 11 errors—the same error count as the Czech. The trouble was, Berdych hit 32 winners and dropped only four points in 34 first serves.

It seemed, then, that the fall and wrist strain had not inhibited him too much, though he admitted it had been difficult: “It was tough. I needed to play well and that’s what I did. I’m happy with the way I handled it today. The time off is going to show how [the wrist] is. It was a pretty bad fall but I try to recover and be strong again.”

He would have to wait a couple of hours to see who he played next: Murray or Simon. He will be a formidable opponent whoever it is.