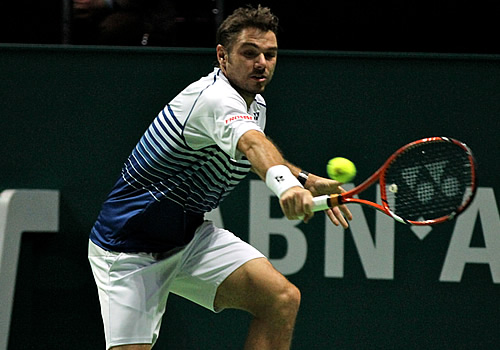 As the first 500 tournament of the year reached its climax in Rotterdam, it was almost impossible to pick a winner between Tomas Berdych and Stan Wawrinka.

Not surprising, given that they were, respectively, the No3 and 4 seeds and the No7 and 8 ranked men in the world.

Both, as they approach their 30th birthdays in 2015, are playing some of the best tennis of their careers and demonstrating their greatest confidence. Both also passed new milestones last year: for Berdych, three Major quarter-finals in one season, and completing the set of Grand Slam semis; for Wawrinka, his first Major and Masters titles.

This year, they had already won more matches than any of their peers, 13 apiece, with Berdych reaching the final in Doha and Wawrinka winning Chennai. Both went on to reach the Australian semis, and both had looked increasingly impressive throughout their time in the Netherlands.

What should—and would—make this such a fine contest was the aggressive stances, both in tennis and mindset, that each was favouring on Rotterdam’s court. And while Wawrinka held a dominant head-to-head of 10-5, Berdych was arguably the one finding something extra since switching coaches during the off-season. Since then, the Czech had scored his first win over Rafael Nadal after 17 losses, and scored unexpectedly straightforward victories over Gael Monfils and Gilles Simon.

The quality tennis kept coming from Berdych, too, in an impressive first set that gave Wawrinka almost no glimmer of a chance. Berdych appeared to have the greater focus and energy, while the Swiss seemed to be running to keep up.

Wawrinka served first but faced the first challenge of a break point in the fifth game. Some clutch serving and a winning backhand held off the danger but Berdych made his own double-handed version of a Wawrinka backhand, followed by an ace, for an easy hold.

It was the Czech forehand that did the damage in the next game, and Berdych broke, holding for 5-3. Serving for the set, he showed just a hint of tension—a wild smash long and then a forced error as Wawrinka upped the aggression—and the Swiss worked a break-back point after a pounding, bullet-fast 21-stroke rally. Berdych, though, found some big and bold serves to hold after 39 minutes of heavyweight tennis, 6-4.

Wawrinka also looked the more vulnerable in the first couple of service games in the next set, twice going 0-30 down, but he held on. He thumped his legs and danced between points to get his adrenalin pumping—he had, after all, played a pulsating two tie-breaks well into the previous evening. And little by little, Wawrinka seemed to get the edge in more rallies, moved more freely, reacted more sharply.

He held at 3-2 with perhaps the shot of the match, a half-volley pick-up of a low backhand from Berdych to make a fading drop winner. The Czech was having to do more work, find more defence against the Swiss attack, and he faced two break points when a forehand winner shot past him at the net. A chipped return of serve from Wawrinka onto his baseline drew a Czech error and he was 3-5 down. His body language said it all.

Berdych had played solid, aggressive tennis but now it was being thrown back at him with interest—and with rather greater variety—and three errors in a row did not help: Wawrinka held for the set, 6-3.

The pressure showed in Berdych’s first serve, which was down to 38 percent. If he felt bruised, it was about to get worse. He hit a dreadful forehand to bring up break point in the first game of the third, and Wawrinka added insult to injury with a dead net-cord winner to break.

The Swiss held to love and then broke again with his signature, picture-book backhand down the line for 4-1. And despite a late rally from Berdych to regain one break and fend off another for 4-5, Wawrinka was the man in control: He served it out, after two hours of punishing tennis, 6-4.

Since Wawrinka last came to Rotterdam for his only previous visit 10 years ago, a lot has happened. Back then, the Swiss, who happened to play and lose for the first time to compatriot, friend and nemesis, Roger Federer, would initially succeed on clay to break the top 10 in 2008. He then slid in form and confidence as low as No29 three years ago, but renewed his efforts with the help of a new coach, Magnus Norman, and transformed himself into a believing ‘Stan the Man’. He challenged the likes of Novak Djokovic in Grand Slams, won his first Masters by beating Federer—and even briefly overtook his Swiss colleague to reach No3 in the rankings.

Wawrinka’s is a fairytale that has inspired contemporaries such as Berdych himself, except that it has not been magical power that brought tennis’s rewards—including a Grand Slam and a Davis Cup—to Wawrinka but hard work, determination and prodigious talent.

Already in 2015, he has won more matches than anyone else—two titles sandwiching a semi run in Australia—and now he has also won his first indoor title and his first ATP500 in Rotterdam.

As a man close to Wawrinka’s heart once said: “Ever tried. Ever failed. No matter. Try Again. Fail again. Fail better.”

Eventually, you may not fail at all.