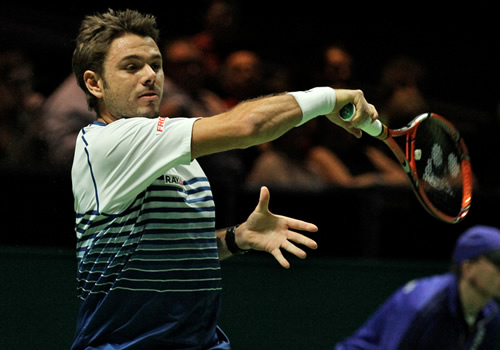 After seeing one Grand Slam champion on centre stage at Rotterdam this chilly Wednesday, the crowds were out in force to see a second, the 2014 Australian Open champion, Stan Wawrinka.

But ‘Stan the Man’ was not the only reason for a packed house: He had drawn Dutch wild card Jesse Huta Galung for his first match here since 2005, and though the match had the makings of a rather one-sided contest—No4 in the world ranged against a No248 who had failed to qualify for all three events he had entered this year—that would not dampen the home crowd’s support.

The Swiss was due to play here last year but was forced to pull out, and he was keen to make amends. Back in 2005, Wawrinka was still ranked 128 in the world, and only played two matches. His second, and what would be his last until this year, was memorable for one thing in particular: It was his first ever pro match against friend and Swiss rival Roger Federer.

As he said before the start of the tournament: “I have some good memories from 10 years ago. I think it was my first match against Roger!”

He went on to explain that it was not just to Rotterdam that he had failed to return in a decade: He had not played indoors anywhere since then. Perhaps it was the change to his usual schedule that affected his focus on this particular occasion. More likely, perhaps, was that he still carried the weight of a heavy few months in his legs.

Wawrinka had talked of a certain weariness after falling in the semis of the Australian Open: The end of 2014 had been a gruelling time, what with the World Tour Finals and then the Davis Cup finals: Wawrinka put heart and soul into both, and then played an exhibition match with team-mate Federer to round off the Christmas season.

So despite him being the hot favourite in this opening match, he looked far below his best, struggling with timing, the low-skimming slice of his single-handed opponent, and some good variety on the Dutch serve.

Against the odds, then, Wawrinka’s became the fifth first-round match to go to three sets of see-sawing tennis, and the fourth seed to do so.

Right from the start, the Swiss was mixing winners with wayward errors and was putting less than half his first serves into play. But 32 minutes saw him take the first set after breaking in the sixth game and fighting off two break points in ninth, 6-3.

But a few errors became many errors in the second set, while Huta Galung rose to the occasion, buoyed up by some very vocal support from a packed arena. The flying Dutchman broke in the second game and served strongly for a 3-0 lead. Extraordinarily, Wawrinka then went down 0-40 on serve, levelled and faced another break point. A netted forehand and he was 0-4 down.

The Swiss managed one break back to steady the ship at 2-4, but there was no stopping Huta Galung, especially with such fluctuating tennis from Wawrinka.

Both men had been throwing in some serve-and-volley plays, and now the Dutchman made a love hold with a volley finish, and he went on to serve out the set, 6-3. The score was identical to the first set and so was the length. They had played for 64 minutes, and the Ahoy arena broke into a celebratory Mexican wave for their bold man.

Huta Galung continued to serve the better in the third: He dropped only five points on serve in the concluding set, hitting his first delivery at 73 percent. But it took only one break-point chance for Wawrinka to pounce, in the fourth game, with back-to-back winners—rare in itself from the Swiss in this match.

He stretched and flexed his legs, shook himself out, geed himself up, and at last began to find some form. An ace sealed a love hold for 4-1 and he fought off two break points for 5-2.

There would be another flurry of errors—and four deuces—in the final game, but Wawrinka closed it out, 6-3.

He, like Murray, has been drawn to play five back-to-back days should he make it all the way to the final—and how he recovers from this will be key to his chances.

For the home crowd, though, it was almost a fairytale ending, but they can be proud that both their men, Huta Galung and, earlier in the day, Robin Haase, two wild cards, demanded every ounce of concentration from their superior opponents.