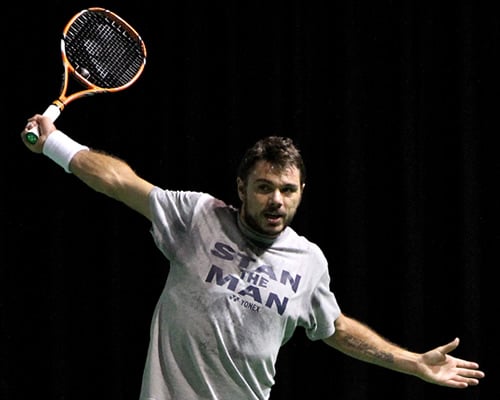 Stan Wawrinka must have grown used to it over the 14 or so years he has plied his trade on the pro circuit: questions, either direct or implied, about his illustrious compatriot Roger Federer.

For so many years, regardless of his winning a first title in 2006, breaking the top 10 in 2008—the year in which he reached his first Masters final—and beating top-10 players every season, including the likes of Andy Murray at the US Open and even Federer in Monte Carlo—he seemed destined to remain in Federer’s shadow, the second Swiss.

But determined to reapply himself—and with that determination inked on his arm in the now-famous Samuel Beckett quote “Ever tried. Ever failed. No matter. Try Again. Fail again. Fail better”—he changed coach, worked harder, and grew in confidence alongside his ever-growing army of fans, drawn to his modest demeanour, his aggressive all-court game and perhaps the finest single-handed backhand in tennis.

He thrilled in five-set Grand Slam matches against Novak Djokovic, won his first Major in Australia last year, followed it with his first Masters title—beating Federer—and even overtook his friend in the rankings after qualifying for the World Tour Finals for the first time at the end of 2013.

And it was quickly Federer’s name that sprung to Wawrinka’s lips ahead of his first appearance at the big Rotterdam 500 tournament in a decade.

Indeed the quietly-spoken Swiss who has now grown into ‘Stan the Man’, had only ever played two matches at the vast Ahoy arena, back in 2005 when still ranked 128 in the world: He won his opener against Sebastien Grosjean but lost the second—in his first ever pro match against Federer.

Back after so long, Wawrinka recalled the last time, and why it had taken him so long to return to Rotterdam.

“I have some good memories from 10 years ago. I think it was my first match against Roger…

“I had to pull out last year, so it was important to come to play here. I didn’t play indoors in February in 10 years, I think, because I played in South America a little bit, and the last few years I didn’t play in February, so I’m excited to be back here.

“I wanted last year to come back, to change [to indoors] a little bit, see new some tournaments. It’s good sometimes to see different places.”

This is, indeed a departure for Wawrinka, who talked after his semi-final run at the Australian Open of how difficult it had been to recover from a packed end-of-season in which he reached the semis of the World Tour Finals and won, with Federer, Switzerland’s first Davis Cup.

“I think we are all different. I didn’t play the IPTL last year: For me it was important after the Davis Cup was finished to take some rest and to practise, but for other players it can be good. For me it was a really long season because of the Masters and Davis Cup. Australia was still an amazing tournament for me, to make the semi-finals in a Grand Slam, that is something really special for me. [Afterwards] I came back home, had a week off, and have been here since yesterday.”

Inevitably, he was probed a little more about the Davis Cup and whether he and Federer planned to defend the title.

“We are close [to a decision], it’s going to come soon. I still have to talk with Severin [Luthi]. He’s the boss. It’s not completely decided. I know it’s late, but the season is long.

“In the end it’s my own decision for sure. I talk a little bit with Roger and more with Severin, but it’s my decision, it’s always been like that after more than 10 years playing every tie.

“[But] it’s a tough decision because we won, because the season was long, because I’m not 20 years old any more. I’ve been on the tour so many years and it’s tough to play everything every year.

“With the year I had last year, it was so full, so important, so big with winning a Grand Slam, the Davis Cup, finishing with the Masters, was a really long and heavy year. That’s why elsewhere I need to think about my schedule and how I make it for this year.”

Indeed Stan sounded as though he had been talking to Roger quite a lot: Federer has also hinted at cutting back on his schedule a little this year, followed by comments such as: “I’m not 24 any more.”

So Switzerland will have to bide its time. But that begged one more question: are there any young Swiss players coming through to replace the maturing super-stars?

“To be sure we are having a good time in Switzerland for tennis in general but it’s been so many years that we’ve been lucky enough have good champions, like Roger and Martina [Hingis] and Marc [Rosset]…. There are a few young players, 15, 16 years old, that start to play well, but that’s still young. You need to see how they are going to improve.”

One thing is certain: The Roger and Stan show will be a hard act to follow in a country with the population the size of Greater London. But Wawrinka’s ambitions still burn.

“Still I want to win tournaments and still want to finish at the best ranking at the end of the year. I am still hungry to be there, to improve, that’s why I need to be clever with my schedule and what I’m going to play this year.”

His first match in Rotterdam since losing to Federer will be against Dutch wild card, Jesse Huta Gulang.