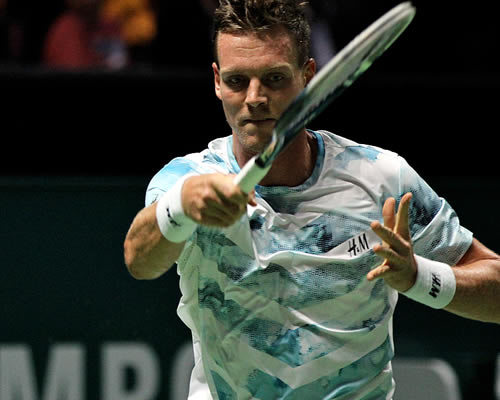 On paper, it was always destined to be a David and Goliath contest between defending champion Tomas Berdych and ‘lucky loser’ Tobias Kamke, who bravely stepped into the lion’s den when Jerzy Janowicz pulled out of the draw with illness.

The tall 24-year-old Pole at least had the advantage of ‘giant’ scale, all 6ft 8in of him. Janowicz is also a former world No14 and a Wimbledon semi-finalist. Kamke, ranked 99, was all of 5ft10in, and slender with it.

He had beaten Berdych once before, in 2010, but Berdych took his revenge in Basel 2013, and over the years had maintained one of the most consistently high levels of tennis and ranking on the tour, a near-impenetrable man to all but the very elite. He has been ranked between Nos5 and 7 for almost three and a half years, and not dropped outside the top 10 since he reached the Wimbledon final in 2010, nor failed to reach the World Tour Finals.

Last year, he reached at least the quarter-finals of three out of the four Majors, including his first semi-final at the Australian Open—a feat he repeated a fortnight ago by beating Rafael Nadal for the first time in 17 consecutive meetings.

He is an imposing figure, all the more so for his quiet, focused body language, and he raced through the first set in double quick time, winning two-thirds of the points, 6-1.

It looked much the same story in the second set as Berdych broke immediately and raced to 5-1. Then Kamke broke, and held, and Berdych found himself having to serve for the match at 5-4—and suddenly facing two more break points, 15-40 down, and then another break point at Advantage. Sure enough, Kamke levelled for 5-5, and what had looked a match of an hour’s duration was headed past 80 minutes.

It proved to be a false daw, however: Berdych broke straight back and served out to love with a forehand winner, 7-5.

The Czech was frank in his assessment afterwards: “It’s good win no matter what, but there were some mistakes in the second set and I really need to take care of that and not have that happen again, and focus all the way to the last point. But in the end I won in two, and that’s good.”

The No8 seed Gilles Simon, who is also in the top half of the draw and twice a semi-finalist in Rotterdam, made heavier weather of his win over No46 Joao Sousa, 7-5, 6-3, 6-2. It took him 2hrs 20mins, and earns him a second-round match against fellow Frenchman Jeremy Chardy, who had to play only six games before Julien Benneteau retired.