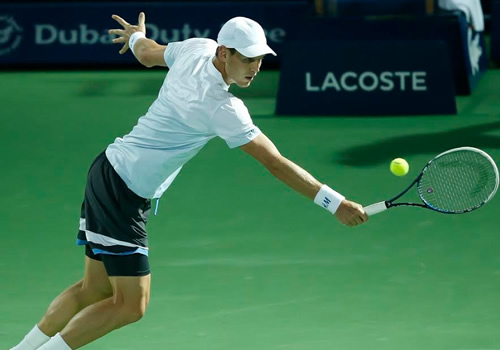 Tomas Berdych will this year become one of that growing band of tennis players who seem still to be maturing into their third decade like a fine wine.

The big Czech will turn 30 in 2015, yet he is arguably enjoying some of the best form of what has been a long and consistently high-achieving tennis career.

It is testament to his quality that he has been ranked between Nos5 and 7 for almost three and a half years, and that he has not dropped outside the top 10 since he reached the Wimbledon final in 2010, nor failed to reach the World Tour Finals.

Look at 2014, the first year he reached at least the quarter-finals of three out of the four Majors, including his first semi-final at the Australian Open—a feat he repeated a fortnight ago by beating Rafael Nadal for the first time in 17 consecutive meetings.

He is also one of that rare club of players not among ‘the big four’ to have won a Masters title—a decade ago—and has reached two more Masters finals since. 2013 saw him in five ATP finals, winning two of them, for the first time in a single season—and he did it again last year. Yet his ambition and work ethic seem undimmed as he prepares for two back-to-back tournaments that have proved particularly fruitful.

First is this week’s Rotterdam 500, which encapsulates the steady and unwavering improvement in Berdych’s advance. Since a sequence of losses in his early appearances here, he has reached the quarters in 2011, the semis in 2012 and then, after missing 2013, went all the way to the title.

Last year, he went from Rotterdam to Dubai, and powered through to the final where he would suffer only his second loss in 18 matches. For the Dubai 500 has also shown the Czech’s resilience and determination. There too, he lost early in his first appearances, but reached the semis in 2011, where he was forced to retire injured, and for the last two years he has been the losing finalist against Dubai’s most prolific winners, Novak Djokovic and Roger Federer.

Already, he has started this season with a bang—the Doha final and then that rare victory over Nadal in Australia. He has also recruited a new coach, Dani Vallverdu, in his constant search for a fresh edge.

Talking to Dutch television ahead of his Rotterdam defence, Berdych was clearly enthused by the prospect of trying to win back-to-back titles here: “I’m really looking forward to being back.

“Yes, you can take some advantage from [being the champion], that you are going to play in a place where you have some good memories, that you can try and bring out the good and positive things of that. But [you have to] focus on every single match that is coming up, not to be thinking what has been in the past but in the present time.”

He talked briefly, too, about his recruitment of Andy Murray’s former associate, Vallverdu, but stressed the value of a strong support network—an element common to all the current crop of elite players:

“We are like a big family travelling all the year together, seeing each other almost every single week, but on the other hand we are all competitors. We are all trying to beat the other ones, trying to have our own teams around us, to be as prepared as possible.”

He concluded, though, by touching on that still-bright ambition, and the ultimate prize of a Major.

“It’s OK for me, [what I have achieved] is good, but why not to make it great? That is definitely the challenge, and the next goals that I move to have and I want to have. It’s always about trying to achieve those goals, even if it’s long term or short term. This is one of them and I want to try and take the whole journey and try to fight for it.”

And there is no doubting that he is a fighter, and one who, match by match, win by win, is determined to be the fittest, strongest and most successful player he can be.