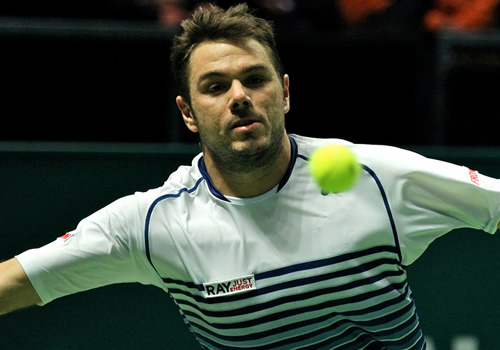 With the unexpected loss of top seed Andy Murray in the second quarter-final in Rotterdam, the spotlight turned on defending champion Tomas Berdych in the top half of the draw—though he would be tested in the semis by world No19 Gilles Simon, who had taken his scalp several times before.

But who would still be standing in the bottom half? Both No3 seed Stan Wawrinka and No2 seed Milos Raonic looked favourites to advance past opponents over whom they had won all previous matches.

Wawrinka had beaten world No37 Gilles Muller in their only other meeting, by chance just a month ago in Chennai. Raonic had beaten Sergiy Stakhovsky on both previous occasions, and though they had not played in three years, Raonic had been ranked just 35 when he raced past Stakhovsky in Memphis to reach the final. Since then, the young Canadian had won a handful of titles and risen to a current No6.

Wawrinka, though, after a strong start to the season, had been slow to adapt to the indoor conditions in Rotterdam: As he pointed out, he had not played an indoor event at this time in his schedule in 10 years. He had taken three sets to beat first Dutch wild card Jesse Huta Galung and then No27 Guillermo Garcia-Lopez. But he had finished that latter match in very fine style indeed.

Muller, for his part, had beaten two top-20 players, including the No5 seed Grigor Dimitrov, to get to this stage. Could he upset the odds again?

Well in the early stages, it looked as though he could, as both men opened with near flawless tennis, striking clean and deep and strong through the court. The serving from both was also outstanding and neither could get a toehold. Love hold followed love hold, and even when threatened by a break point at 2-2, Muller produced two aces.

Inevitably they headed to a tiebreak, by which stage Muller had stacked up 95 percent success on his first serve and Wawrinka 100 percent. As for the errors, Wawrinka had made not a single one. Now, though, he asserted himself with the early advantage at 5-2, brought up set point with his signature backhand down the line and a roared ‘C’mon’, and took the set, 7-6(3) in 38 minutes—a super-quick pound through a tie-break set. Wawrinka had dropped just one point on serve in the 13 games and just one error.

And with Wawrinka serving first in the second set, that looked an insurmountable problem for the man from Luxembourg. But to his credit, Muller backed off not an inch and broke Wawrinka in the first game. His problem was that the Swiss man was returning superbly and he immediately broke back.

Threatened by another break point in the third game, Wawrinka stepped up his serving with two 208kph aces.

Finally, at 2-3, Muller’s serving level dropped a fraction. He levelled from 15-40 to deuce, played two more deuces but then double faulted to bring up another break point. Once again, it was a thrilling Wawrinka winner that did the deed and broke for a 4-2 lead.

The end when it came was quick: Serving at 5-3, Wawrinka made two aces to serve out the match to love, 6-3. Muller had stayed on level peggings on the winner count—and all credit to him, particularly as he made just 18 errors. But Wawrinka made only nine unforced errors in a match of 123 points: Impressive tennis in the face of an attacking and robust opponent.

“Really happy with the way I am playing. Today was my best match of the week. I am playing better and better. Now I’m going to be ready for tomorrow.

“It’s never easy. Tomorrow’s semi-final against Raonic or Stakhovsky, both playing really good tennis. I expect a tough match whoever I play but I need to focus on myself and be ready.”

Against Raonic, Wawrinka has a 3-0 lead, once in each of the last three years. He also beat Stakhovsky in their only previous meeting, though that was at the US Open in 2012 and quite a tussle.

For some, the prospect of the single-handed backhands of Wawrinka and Stakhovsky going head-on is certainly a pleasing one, but the 29-year-old from the Ukraine would have to overturn a 2-0 head-to-head against Raonic to bring that about. And it is Raonic who will be facing Wawrinka after he continued his streak with a 6-2 3-6 6-4 win over Stakhovsky.