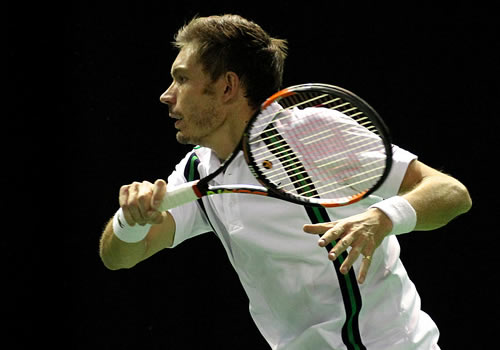 Nicolas Mahut is through to the last four in Rotterdam Photo: Marianne Bevis

And so it came to pass. This correspondent closed a French-themed story with a look ahead to an unlikely scenario and an unenviable schedule come semi-final Saturday at the ABN AMRO World Tennis Tournament.

Nicolas Mahut, the oldest man in the singles draw and ranked 54, came through two rounds of qualifying and into the quarter-finals without dropping a set. Then, within a couple of hours, he was back in action on Court 1, partnered with Vasek Pospisil, and reaching the doubles semi-finals.

But then the ‘unlikely scenario’ did indeed unfold as Mahut, who had lost to No8 seed Viktor Troicki in both their previous meetings—including at the same quarter-final stage in Sydney a month ago—raced past the Serb for the loss of only three games in 71 minutes, 6-2, 6-1, with his own special brand of crowd-pleasing serve and volley, slice and dice tennis.

And that set up the ‘unenviable schedule’: One day, two draws, two semi-finals. But through the biggest smile of the day, he could not hide the delight: “My first ATP500 semi-final.”

Because last year’s US Open doubles champion has never enjoyed the same level of success in singles: perhaps the tour moved away from grass to hard courts a little too soon for the old-school Frenchman. In his 15 years on the tour, he has won just three singles titles, all of them on the grass where his style of tennis thrives. Two of those titles, it so happens, came in The Netherlands, where he won s-Hertogenbosch in 2013 and last year.

That 2013 title was, indeed, his first singles triumph ever, and until he stepped on the grass that year, he had not won a main-tour match while he nursed what was almost a career-ending knee injury.

He explained after this Rotterdam milestone: “I worked really hard to come back after knee injury. I didn’t think it was the end, not the moment to stop. I could have only played doubles, but I said, OK, let’s try one more time.

The more I play, the better I feel, I think. I have the rhythm

“When I played the first time in Holland, I was ranked 250 and maybe that was the last opportunity for me to play singles. I had the chance to play the qualies, and I won the tournament. From the moment I won the tournament, I had the best results of my career, and tomorrow I will play my first semi-final of an ATP 500—so, well, it’s a great story age 34: I don’t complain!”

He paused a number of times to smile and say, with a kind of disbelief: “Well, I don’t know what to say…”

But pressed about how he could conjure up a win against Troicki on such a slow surface, it was abundantly clear that, on court at least, he knew precisely what to do.

“This is maybe the slowest indoor court we have, but I know if I feel great then I know I can run, I can use my backhand slice then also come to the net and surprise the opponent… [Viktor] likes it when the ball comes fast and when he has some targets, so I changed the tactics from Sydney, played a little more from the baseline, bit slower. I beat him, so it works. I’m really fortunate!

“Viktor I think was really tired from the matches he played earlier this week, but still I played great tennis.”

Then he repeated: “It’s a great story. I play better and better… I don’t know what to say.”

Did he have no concerns about playing so many matches this week—seven and counting?

“The more I play, the better I feel, I think. I have the rhythm, I know the court very well. I don’t feel tired too much for now. Still I have one day to recover and rest—so I don’t complain.”

He plays in Saturday’s first semi-final against Martin Klizan, who knocked out the No6 seed Roberto Bautista Agut, 6-7(5), 7-6(6), 6-0, in two and three-quarter hours. The left-handed Slovak, ranked 43, saved five match points to overturn a 4-0 match deficit against the Spaniard, and will be left with rather less time to recover than Mahut.

The veteran Frenchman, though, will be straight back on Centre Court to play the first doubles semi against Henri Kontinen and John Peers… “after a short rest”, the schedule generously notes.

Mahut joked: “You really want me to retire! Age 40 in singles would be tough, but in doubles I could play many years. But I don’t look too far. I’m just focused on this year: I have many goals. The Olympics is coming fast… and yes, it’s a dream, a goal, but maybe it will be the last chance for me to play.”

First, though, is the small question of that ‘unlikely scenario and unenviable schedule’, the chance to reach his first hard-court final.