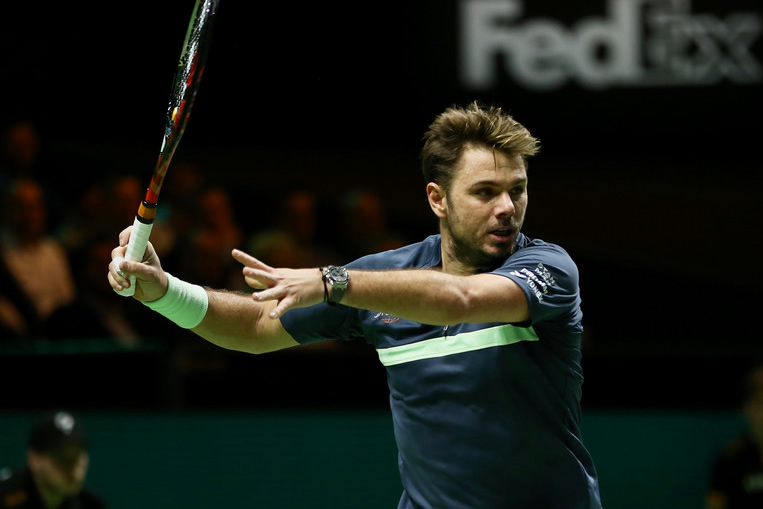 He was a wild card, benefitting from being a Dutchman in Rotterdam’s ABN AMRO Tennis Championships. But the 21-year-old Tallon Griekspoor certainly lived up to the hopes of Tournament Director Richard Krajicek, and then some.

He was drawn against one of the most formidable players of the last few years, a three-time Major champion with a powerhouse game, the 32-year-old Stan Wawrinka. What worked in the young pretender’s favour was that Wawrinka was rusty, still not match fit from the six months he was side-lined following knee surgery in the latter part of 2017.

He managed to make the second round at the Australian Open on his return to competition, but then last week he showed a little more form in reaching the semis of the ATP250 in Sofia. But even in practice here, Wawrinka did not look like a former Rotterdam champion, still a little slower, a little more laboured than his usual best.

But this was only Griekspoor’s second main-tour match—the last was as a wild card here last year when he lost in the first round. This was his first professional singles match of the year at any level. However, last year, he did not drop a set on his way to his third Futures title. But there was no getting away from the fact that the Dutchman was ranked just 259.

He did not play that way, at least he did not do so after settling down. Wawrinka got first blood, despite not serving at a very high level. He broke early and held that advantage for the first set, 6-4. But with the crowd behind him, Griekspoor turned the tables in the second set, breaking quickly and not offering up a single break point in return as his confidence grew in front of Dutch fans’ eyes.

Griekspoor’s serving maintained a high level, but Wawrinka was not moving with much energy, and his serving was now down to 50 percent. The Ahoy arena cheered as their man stayed in control of the set, 6-3.

Wawrinka continued to look a shadow of his usual self, and was broken quickly in the third set as Griekspoor went for his shots with increasing confidence, and he was buoyed up by a growing tally of errors from his opponent. With a 4-2 lead, could this youngster hold on for a famous win? Not only that, he broke again, and served out the match 6-2.

“Unbelievable, I have no words for it, beating such a great champion.”

Wawrinka was afterwards quick to praise his opponent

“I have to say I think he played well, and he was playing aggressive, playing a great level, and deserved to win. No, I was not surprised at his level. I knew he was a talented player, big hitter, I think today he played really well and has great potential.

“I think he started a bit slowly, was maybe a bit nervous, but since the middle of the first set, I think he was playing way better, he was serving good, trying to be aggressive and playing better than me.”

But of more immediate concern for Wawrinka’s army of fans is the state of play in his own recovery. He was pragmatic:

“It was tough day at the office. I was not as good as last week. It will take a lot of work to get back where I want to be, it takes time, a lot of ups and downs during these weeks and months.

“I’m not worried [about my knee]. You have to be pretty patient, and I have to keep working in the right way because I know that sooner or later I will be back at the level I want to be.”

So what next for the Swiss in his recovery? Is it a question of resting up, taking it steady, or pressing on to get back his match fitness?

“I’m going to play next week in Marseille, but I have at least a week before I play my first match, so that gives me time to get back on practice courts. From tomorrow, I’m going to see with my team exactly the plan. But we knew that there will be some tough tournaments. I need at the same time to keep working hard to improve.”

So the much-discussed quarter-final match that had looked set to pitch Swiss friends against each other as Federer bid to regain the No1 ranking will not come to pass.

However for Griekspoor, the challenges come thick and fast. Next up is a fellow Dutchman, either Robin Haase or Thiemo de Bakker, and then, if Federer beats first Ruben Bemelmans and then Philipp Kohlschreiber, that No1-determining quarter-final.

It may not be what the tournament or the Dutch fans expected, but it will be no less thrilling for that.