The Russian is 12 wins from 13 matches this year 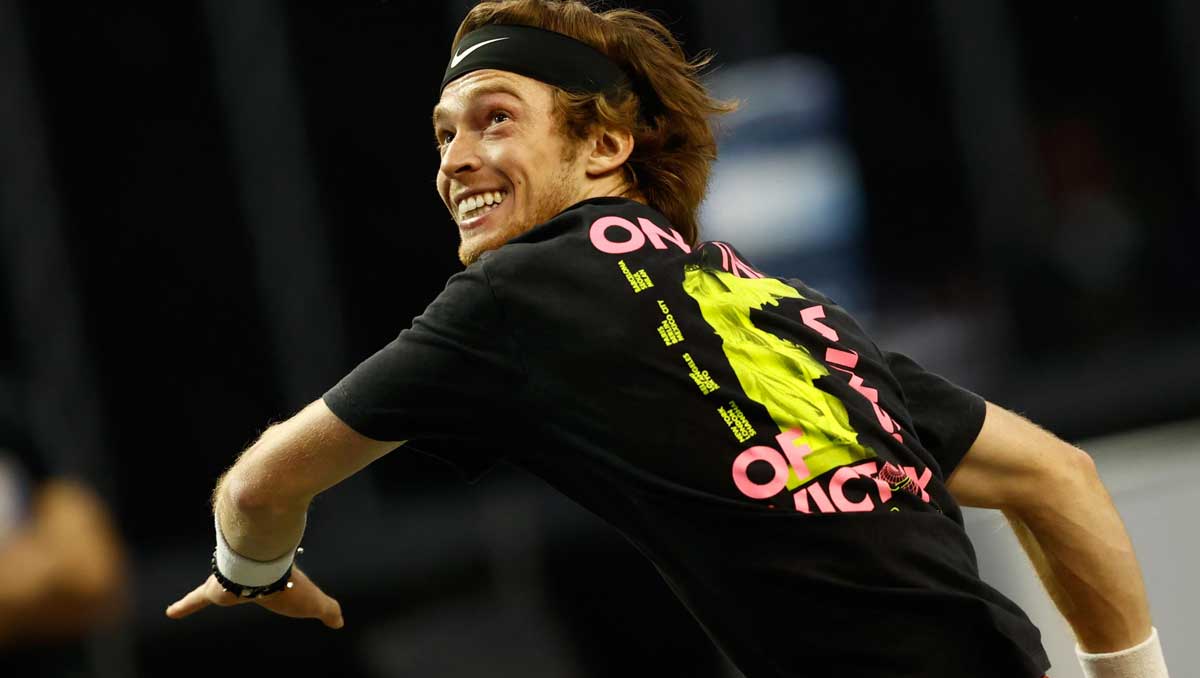 A pity perhaps that one of the most anticipated match-ups of the Rotterdam draw should become the semi-final contest rather than the final.

The only two seeds remaining, No2 Stefanos Tsitsipas and No4 Andrey Rublev, have been among a handful of young stars tipped for the very top, the former age 22, the latter 23, both former No1 juniors, and both stringing together impressive results.

At this year’s Australian Open, Tsitsipas reached the semis for a second time, beating Rafael Nadal from two sets down. Rublev reached the quarters, having already won the ATP Cup with his compatriot Daniil Medvedev.

Last year, the potential for this budding rivalry was already clear. Three of their five previous matches were played in the truncated 2020 season, two won by Tsitsipas, though Rublev won their US Open battle in 2019—which took four sets and almost four hours.

As they entered this latest contest, they had lost just one match each this year, a combined 20-2 for the season. Rublev in particular was surging up the ranks since being side-lined by a lower back injury in 2018, and last year, he led the ATP tour with five titles, one of which came in Hamburg, where he beat Tsitsipas in the championship match.

And as Tsitsipas said of their match:

“We’ve made each other better. I think it’s good for the game to have players like us play against each other.”

Rublev, too, made an interesting observation before the match:

“I think he has more skills than me. He goes more often to the net and he’s really good at the net. I’m more of a baseliner. But now I’ve started to also improve my volleys and I’m doing better. We both have aggressive styles of the game, but… I think that’s also good for me—I can improve volleys, I can improve [my] defence.”

The Russian was as good as his word: He has been improving his game at the front of the court, helped not a little by playing doubles on a regular basis. Twice he and fellow Russian Karen Khachanov had been finalists in Masters events.

And he got off to a flier with a quick break, his forehand finding its depth and angle straight away. Tsitsipas had a chance to break back in the next game, and again in the sixth, but the chances went begging as Rublev kept up the power and pressure, running his opponent ragged from side to side.

The Greek looked sure to break in the eighth game, and worked three chances, but Rublev stayed resilient, and picked off a couple of overheads and drop shots comfortably to hold, 5-3. A sizzling forehand return of serve from Rublev then brought up 0-40 for three set points, and an overhit strike from Tsitsipas delivered the break and game, 6-3.

The second set remained brutal in its intensity, and Tsitsipas was beginning to look a little fragile—under 50 percent on first delivery—yet neither could work a break point as they headed to the 10th game.

The Greek had played some tough singles matches this week, averaging more than two hours in each, but had also played two doubles matches with his brother—one of them after his Khachanov marathon quarter-final.

Yet he continued to hold his own as far as the tie-break, but there, Rublev powered to a 5-1 lead, aced for 6-2, and pulled off an outstanding touch volley winner to finish the job, 7-6(2), his 34th winner, and his 19th from 22 played at the net. More, in the event, than Tsitsipas.

Rublev is proving to be the real deal, and has continued to up his level with energy, attack and the confidence to take the ball early, hit his marks on serve, and time and again out-hit opponents with his forehand.

The Russian will play Marton Fucsovics in the final after the Hungarian best Borna Coric, 6-4, 6-1.