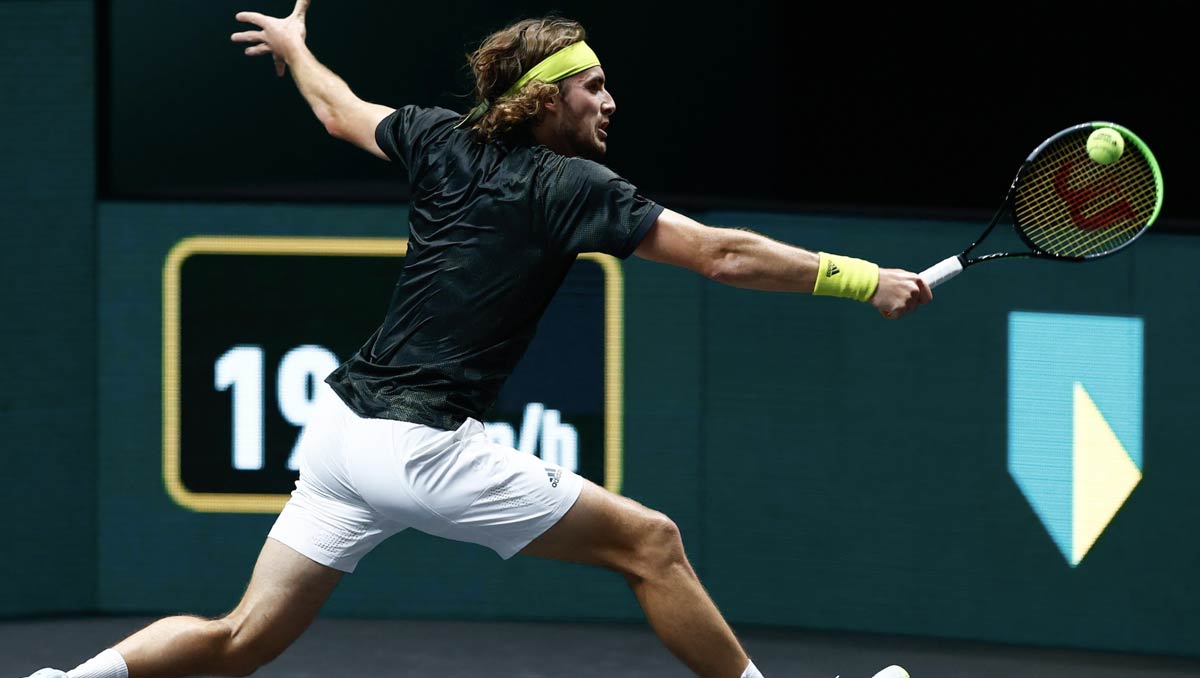 As the highest remaining seed in the Rotterdam draw, No2 Stefanos Tsitsipas was still on course to try and win his first ATP500 title. Not only that: he could overtake Roger Federer in the ranks with a rise to No5 in the world by the end of the week.

The Greek star had been forced to dig deep to win both matches thus far in Rotterdam, but he had shown the same kind of skill and resolve as at the Australia Open, where he came back from two sets down to beat Rafael Nadal and reach the semis.

In 24-year-old Karen Khachanov, though, he faced a man regaining some of the form that had taken the Russian to No8 in the world after a blistering 2018 season that ended with the Paris Masters title.

Yet the Russian seemed to stall—and had not won another title thus far, nor even reached a final. He beat just two top-20 players last year, and none in the top 10, but his form in Australia showed signs of a resurgence, and he beat No8 seed Stan Wawrinka in the first round in Rotterdam. Tsitsipas, though, represented a stern test.

And the Greek got off to a strong start, getting the better of some big-time baseline exchanges, and he broke the Russian for 2-0. But Khachanov settled, eliminated the errors, and broke straight back, while Tsitsipas picked up an early time violation.

The Russian held, and then went 0-30 up against serve with a run of nine from 10 points, and he earned two more break chances with some great defence in the face of some bludgeoning play to his forehand wing.

Tsitsipas needed to change things up, and he staved off the immediate danger with a race to the net. But some over-reaching forehands, and the Greek made his 10th error for another break chance, and Khachanov thumped an overhead to convert, 3-2.

The Russian then showed his own increasing net skills with a touch winner to hold serve, 4-2, the reward for regularly playing in doubles draws. Indeed twice, he and compatriot Andrey Rublev had made the finals in Masters tournaments, and reached the quarters in the doubles draw this week.

Tsitsipas had to fight hard through repeated deuces in the seventh game, his error count now up to 13 compared with five from Khachanov. But his hard work paid off, 3-4, and did so again to tough it out for 4-5. The Russian would have to serve it out, and got off to a good start with a backhand volley winner, and he fended off some aggressive counter-attacks to serve it out, 6-4, after a compelling 55 minutes.

Tsitsipas started the second just like the first, with a break for 2-0, but this time held on to lead 3-0. He was now making more forward plays, and had a chance to break again as he pinned Khachanov at the back of the court. The Greek chased down a big smash to hoist a lob on break point, and the Russian could not control his reply: 4-0.

Tsitsipas continued to impress, holding off deuces again, showing considerable focus, and mixing up the rhythm and pace. Serving for the set, he wavered to concede a break, but made no mistake in sealing it 6-3 at the second attempt.

Khachanov had to play eight points to hold the first game of the third, but although Tsitsipas seemed to have the momentum, the Russian got a second wind, and broke in the fourth game, 3-1.

But then he fluffed a net rush to go deuce, mistimed a lob retrieval, and faced break-back point. Khachanov rushed forward again, and this time put a forehand volley wide: Tsitsipas broke, 2-3.

They remained neck and neck, but Tsitsipas now looked the more confident, had a swagger in his step, and held to love at 5-5. He took the first two points against serve, too, and although the Khachanov forehand came to the rescue on a first break point, it let him down on the second. Tsitsipas broke to serve for the match, and did so in style, with one last conclusive first delivery, 7-5, after a gripping two and three-quarter hours.

Tsitsipas and Khachanov are both big men, but each demonstrated what great movers they are, and how dynamic and effective the attacking style of play can be, even on the slow surface of Rotterdam. The Russian came to the net 26 times, while Tsitsipas, perhaps with the better touch of the two, made 33 points from 41 attempts, and both made more winners than errors—a feat in itself on this unforgiving court.

Tsitsipas was delighted with his tennis, and talked not for the first time about his mental strength.

“[Karen] was playing great tennis, I wasn’t sure I was going to play at his level. Overall a very difficult match, we played some unbelievable rallies, the level of the tennis was phenomenal… Three-setters are very mental—have to try to stay as calm as possible. I feel it adds to my confidence knowing I have won many of them!”

His work was not done for the day, either: He soon had to play his doubles quarter-final with younger brother Petros. He said:

“The fact that I am able to play with my small brother is a great thing. Physically, I’ve played a lot of tennis, but I’m very excited.”