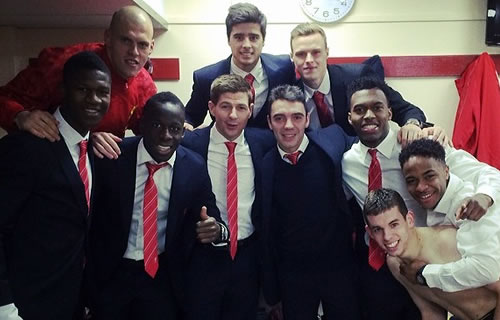 Steven Gerrard scored a last-gasp penalty as Liverpool came from behind twice to seal a thrilling 3-2 victory over Fulham at Craven Cottage.

Unsurprisingly the dramatic encounter in west London sent Twitter into a frenzy, and here is a selection of our favourite Twitter reactions from the professionals, past and present, in chronological order.

Celebrity Arsenal fan Piers Morgan ‏(@piersmorgan) is worried that the Reds could leapfrog the Gunners: “Liverpool will finish ahead of us because they have great strikers and a great captain. #afc”

Ex-Liverpool striker Neil Mellor (‏@NeilMellor33) praises the Reds after a resilient display: “Great result to come back from trailing twice and take a massive 3points so late!! #LFC”

Ex-Liverpool forward Stan Collymore (‏@StanCollymore) reckons Gerrard has an important role to play: “Steven Gerrard. Keep him fit. If #LFC are in this position in 4 games time, he will be very,very,very,very important in that dressing room.”

Former Red Jim Magilton ‏(@magilton7) tips the title race to go down to the wire: “What a result for Liverpool! It’s going down to the wire and they are gaining confidence with every win! Although conceding soft goals!”

Liverpool legend John Aldridge ‏(@Realaldo474) heaps praise on the Reds skipper: “By the way what a great pressure penalty by STE G different class!! It takes big balls to step up last min of a game of massive importance.”

A man who knows all about the pressure of being Liverpool manager, Roy Evans (‏@Roy_Evo) has his say: “It puts Lfc right back in the mix the lads should take great confidence knowing that they can win when things don’t always go your way.”