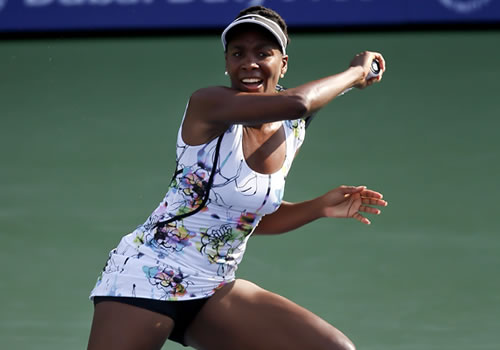 Serena Williams is just one win away from facing sister Venus in Saturday’s final of the Dubai Duty Free Tennis Championships after both claimed straight-set victories on Thursday.

Serena’s opponent in the semi-finals will be Alize Cornet, who defeated Carla Suarez Navarro 7-5 6-3, while Venus will tackle 2011 champion Caroline Wozniacki, who overwhelmed Sorana Cirstea 6-1 6-2 in just 62 minutes.

I’m still getting a little rust off. But it feels good

Top-seeded Serena played a solid match from the beginning, taking a 3-0 lead before closing out the match in style, at one stage winning 12 consecutive points. It was, she thought, an improvement on her opening performance which followed a month of inactivity.

“It definitely felt a lot more comfortable,” said Serena. “There are some shots today that I missed that I would never have missed a month ago, so I’m still getting a little rust off. But it feels good. I’m still trying to make sure I keep going in the right direction.”

Two-time former champion Venus Williams took the opening set and then held the upper hand in the second set, leading 4-2, but from then on she struggled to close out the match.

She had to fight off two break points to hold for 5-3 before the battle moved on to a dramatic conclusion. After Pennetta held for 5-4 and in a nail-biting finish, Williams fell behind 0-40, recovered to hold a match point, but then dropped her serve.

Despite that disappointment she managed to break Pennetta’s serve again to lead 6-5, but again fell behind 0-40 before claiming the next five points and the match.

“She just keeps fighting. She stays relevant,” said Venus. “That’s what she does really well. She stays in the point. I have to give her credit for that. I think I could have maybe made a couple more shots, but it’s not always easy against someone who competes as well as her.”

Wozniacki took charge against Cirstea right from the start and was never troubled as she swept to a comfortable victory.

“That was good. That was really pleasing, and I always know that Sorana can be a tricky opponent,” said Wozniacki. “It was important for me not to let her back in the game, and I felt like I served well and I put the pressure on her and played the way I wanted to play today.”