Madrid Premier preview: It could become the Serena Williams and Maria Sharapova show through the clay season 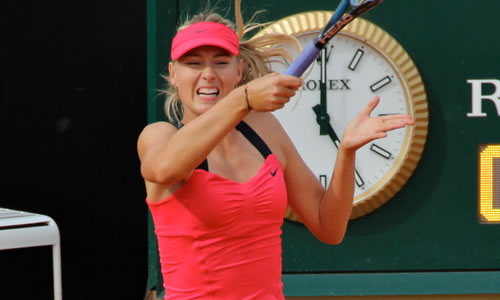 While just three men have held sway over the men’s No1 ranking since 2004—Roger Federer, Rafael Nadal and Novak Djokovic—it has been an entirely different story in women’s tennis.

Over the same decade, 11 different names have topped the women’s rankings. Some have managed long stretches without winning a Grand Slam: Caroline Wozniacki for almost a year, Dinara Safina for half a year.

Some have burst to the top in the wake of a Major only to fall away within weeks, like Ana Ivanovic.

Pairs of rivals fought off all-comers to pass the accolade back and forth, as fellow Belgians Kim Clijsters and Justine Henin did for a year between 2003 and 2004.

Then last year, a new face, Victoria Azarenka, went on a tear of titles to hold down the No1 ranking for most of 2012 and on into this year. Would this herald a new age of dominance by a Grand Slam-winning star.

It did not: An ankle injury since winning the Australian Open and Doha titles has seen her slip to No3. In her place, more than a decade after she rose to No1 for the first time in July 2002, is the remarkable Serena Williams, who has punctuated the top of the rankings no fewer than six times to accumulate 134 weeks as queen of the court.

But she is not alone in demonstrating both persistence and consistency. In August 2005, a blond teenager from Russia stole first one week, then six more, from a year otherwise dominated by Lindsay Davenport. Two years later, Maria Sharapova did the same to Henin before shoulder surgery knocked her outside the top 100 in 2009.

But like Williams, Sharapova has risen from her injury ashes like a phoenix. She grabbed a month at No1 last summer, and has continued to knock on the door this year with two Premier titles from three finals since March.

Williams, though, despite arriving in Spain with two straight titles plus two Fed Cup match-wins, is defending champion in Madrid and thus has a lot of points to defend. Sharapova, who fell to Williams for the loss of just three games in last year’s quarters, has the potential to gain points. The Madrid title for either would guarantee No.1

So with both showing great form this season, both with titles on clay, it could become the Serena-and-Maria show not just in Madrid but through the clay season, past the French Open and on to Wimbledon, a run dominated by the duo last year.

But much depends on how strongly Azarenka returns after her long lay-off, for although she shines brightest on hard courts, she has been the losing finalist in Madrid for the last two years.

Another woman to follow is 2011’s French Open winner Na Li who suggested a quick return to form after the ankle injury she sustained in the final of the Australian Open by reaching the final in Stuttgart.

Clay titlists so far this year also include former No1, Jelena Jankovic, winner in Bogota but more impressively pushing Williams to three sets in the Charleston final.

Last week, Francesca Schiavone, who won Roland Garros in 2010 as well as reaching the final in 2011, won in Marrakesh.

Ivanovic, French Open winner in 2008 and finalist in 2007 pushed Sharapova hard through three sets in Stuttgart.

Roland Garros finalist last year, Sara Errani, won in Acapulco against another woman making an impression this season on clay, Carla Suarez Navarro, who has also reached the final of the Portugal Open this week. The other clay titlist in 2013 is Errani’s doubles partner Roberta Vinci—the duo is ranked No1—who won in Katowice.

So where have all these threats landed in a draw that boasts the top 16 ranked women as the 16 seeds—and in whose half has Azarenka fallen?

It proves to be Williams who has drawn the short straw, not just in finding Azarenka in her half but Li in her quarter.

The Chinese No5 seed does not have an easy path, either, possibly facing the winner between Anabel Medina Garrigues and Madrid 2010 runner-up Venus Williams. Next could come Wozniacki, who is in a section with tricky Kirsten Flipkens and Mona Barthel.

Serena Williams herself opens against a qualifier but could then face home-grown Lourdes Dominguez Lino who was losing finalist to Schiavone in Marrakesh last week.

However Williams is on a 25-2 win-loss this year, has three titles—including Charleston’s clay—and has lost only once to Li, though the two have never met on clay. Assuming she advances to meet Azarenka, she takes an 11-2 advantage, including victory in their only clay meeting: in Madrid last year.

If Azarenka is match-rusty—and she may be—she has some major obstacles of her own, not least an opener against Anastasia Pavlyuchenkova, finalist in Portugal this week. The rounds unfold with the likes of Lucie Safarova, Schiavone and then the winner between in-form best friends and doubles partners, Errani and Vinci. No7 seed Errani should have the edge and could upset Azarenka too.

Compared with her early career, Sharapova has become something of a force on clay: Six of her last nine titles have come on the surface, including last year’s French Open.

With continued success in Stuttgart, she has looked increasingly confident and powerful on clay, and her early rounds should pose no difficulties: Indeed she could face a qualifier in each of her first three rounds, though quarter-finalist in last year’s Roland Garros, Dominika Cibulkova, is her scheduled Round 3 opponent.

The quarters pose some tougher names, though whether it is the seeded Sam Stosur or Petra Kvitova who makes it through, or one of the unseeded dangers, Suarez Navarro—a tough opener for Stosur— or wild card Daniela Hantuchova remains to be seen.

In the other quarter, Briton Laura Robson, who is on a 5-9 win-loss run this season, is lined up to meet No4 Agnieszka Radwanska in the second round.

The winner could meet either of two clay court exponents and former No1s, Jankovic and Ivanovic, in what may prove a stand-out Serbian match-up.

Whoever comes through that section could meet the strong German Kerber or big-hitting No11 seed Nadia Petrova, though Svetlana Kuznetsova is also in this segment.