Serena Williams marks 210 weeks at No1, but Sharapova in chase to top

Serena Williams is enjoying her longest continuous spell as world No1, which now stands at 87 weeks 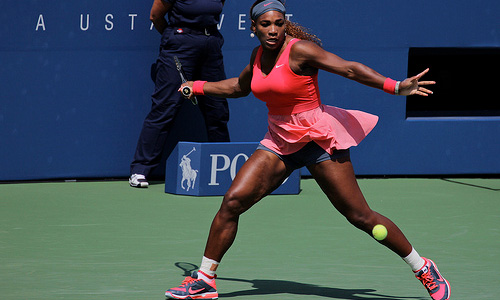 Serena Williams has been world No1 for 87 straight weeks Photo: Marianne Bevis

Serena Williams is enjoying her longest continuous spell as world No1, a current run of 87 weeks, and has now overtaken Martina Hingis in the overall table of weeks at the top of the rankings.

Williams has today reached 210 weeks, one more than the Hingis, though she remains almost a year’s worth of weeks behind next in line, Christ Evert, who notched up 260 weeks. Even more remarkable, Steffi Graf and Martina Navratilova are 167 and 122 weeks ahead of Williams in the table.

And Williams’ position is under threat as the elite eight women on the tour head to the end-of-season climax in Singapore at the WTA Championships.

Williams is the defending champion, and picked up the maximum 1,500 points last year by playing and winning all five of her matches.

But one notable absentee at the tournament was Maria Sharapova, who missed the entire autumn of 2013 with injury. The Russian has subsequently made the climb back from a low of No9 in April, via titles in Stuttgart, Madrid and Roland Garros, to No5, and gradually picked up points through the US Open Series that she missed last year to break back into the top four.

A title-winning run at the last Premier Mandatory of the year in Beijing took her to No2 both in the Race and the overall rankings—and within striking distance of Williams by the end of the year.

Sharapova trails Williams by fewer than 2,000 points, and once last year’s points are removed in Singapore, that gap becomes fewer than 500. So their respective results in Singapore will determine who begins 2015 as queen bee.

There are several permutations for point-scoring due to the round-robin format of the initial stages—and players can gain points simply by playing, even if they lose. But there is a strong chance that if either Williams or Sharapova wins the title, they will also become year-end No1.

However, another unknown ahead of Singapore, which begins on 20 October, is the fitness of Williams. She was forced to pull out of Beijing ahead of the quarter-finals with a knee problem, and returned to Europe for an MRI scan.

She commented before she left China: “If I feel this way for Singapore, I don’t think it’s smart for me to play. I’m just going to see how it goes.”

Whatever the next few weeks hold for the top two women in tennis, their rivalry will surely continue through 2015, though one singular challenge will continue to face Sharapova. She has not beaten Williams since the WTA Championships were held in Los Angeles in 2004—now a run of 15 straight losses. Indeed she has won only three sets in that time.

Perhaps the No1 ranking is not the most significant target on Sharapova’s mind: rather it might be beating Williams to get it.

All-time most weeks at No1