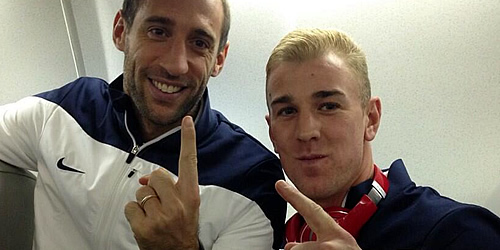 Wayne Rooney put in a starring performance as Manchester United edged to an unconvincing 1-0 victory over Real Sociedad in the Champions League.

Meanwhile, in the early kick-off, Manchester City striker Sergio Aguero scored twice to help the visitors come from behind and beat CSKA Moscow.

Here is the best of the Twitter reaction from the professionals, past and present, in chronological order, to a good night for the Manchester clubs in Europe.

Former world champion and Manchester City fan Ricky Hatton (‏@HitmanHatton) is delighted to see his side back in the match: “Boom. Come on now City!”

Southampton legend Matt Le Tissier ‏(@mattletiss7) is also a fan of the Spaniard’s moment of genius: “What an assist that was from Negredo!! Brave from Aguero too! #city2-1”

Former City goalkeeper Shay Given ‏(@No1shaygiven) praises his former team-mate: “A massive save from Joe Hart at the death there for @MCFC!”

Injured City captain Vincent Kompany ‏(@VincentKompany) is thrilled to get back to winning ways in Europe: “This win was important. Let’s finish the job and move on to the later stages of the Champions League. Well done City! #mcfc”

Citizens striker Sergio Aguero ‏(@aguerosergiokun) is happy to see City develop a team spirit: “Massive coup for @MCFC at Moscow. Happy for the
victory and goals – but happier about our growth and teamwork.”

Ivorian Yaya Toure ‏(@Toure_yaya42) has his say on reported racism in the Moscow stands: “I believe in football institutions, I know decision makers will take their responsibilties and show A RED CARD TO RACISM.”

City defender Pablo Zabaleta ‏(@pablo_zabaleta) hails his goalkeeper Hart: “Well done big man!!! What a save at the end of the game.”

Doncaster Rovers man David Cotterill (‏@cotterill_david) enjoyed Gary Neville’s commentary for the own goal: “Gary Neville: ‘The defender has started like he’s on the waltzers, all over the place!!’ Ha ha ha #UCL”