Dubai is voted the favourite ATP 500 tournament, while Shanghai takes the Masters award, and Swedish Open wins the 250 level 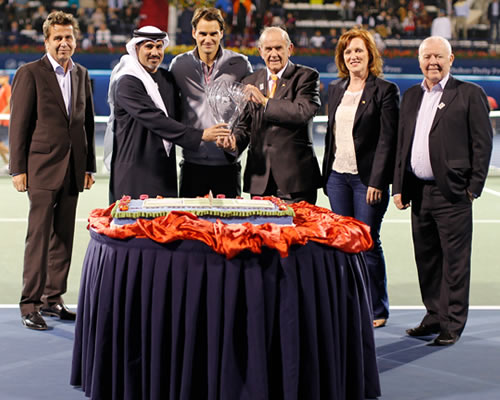 Timing is everything, and with the Dubai Duty Free Tennis Championships in full swing when the ATP announced the winners of its tournament awards for 2012, it was the obvious choice for the cutting of the celebratory cake.

No surprise either that the five-time Dubai champion, Roger Federer, was asked to hand over the trophy to the tournament director: Federer also happens to have a home just down the road. Just as well, perhaps, that he won his opening match on Centre Court!

The ceremony was to mark the Dubai event being voted, for the ninth time in 10 years, the players’ favourite ATP 500 tournament, while Shanghai, almost as dominant at the Masters level, took a fourth straight award. More remarkable than both was the SkiStar Swedish Open in Båstad, which continued its dominance at the 250 level, winning the award for an 11th consecutive year.

Brad Drewett, ATP executive chairman and president, said: “These awards represent a true endorsement from the world’s best players who clearly value the effort these tournaments make in setting the highest standards on the ATP World Tour year after year.”

Ever since its first edition as an ATP World Tour Masters 1000 four years ago, the Shanghai Rolex Masters has earned the award in the top category. The 2012 tournament came to a dramatic conclusion with Novak Djokovic saving five match points against Andy Murray in the final.

Murray, a two-time winner of the Shanghai event, said: “They put on a really good tournament. They look after the players really well. They make a big effort, the venue is fantastic, they have a lot of practice courts, a good gym and the centre court is a really nice court as well, so I’ve just always felt pretty comfortable there.”

Federer, talking about Dubai, said: “We, the players, and the top players in particular, love coming to Dubai. They always have a great field and this combination makes this a very attractive tournament for all of us.”

And talking about Båstad, world No4 David Ferrer, said: “Since playing in Båstad for the first time in 2003, it has been one of my favourite tournaments. Over the years, I’ve had some great results in Båstad, but more than that, the service around the tournament is fantastic and I look forward to competing there again.”

Federer, asked about the awards after the ceremony, explained how difficult it is to select a favourite and also some of the elements that make a difference to the players:

“I really only know the ones I have played at the last few years [but] every tournament has its charm to that’s where it’s very difficult to choose.

“I think players like to see there is always an investment in terms of trying to get a bit better or more attention to detail.

“[Shanghai is] a very player friendly tournament. Beautiful centre court, one of the nicest we have on tour. I think they learned by hosting the Tennis Masters Cup for so long. They know how it’s done.”

Shanghai is, indeed, a jewel in the tour’s crown, purpose-built from scratch for the Masters Cup and an engineering triumph that boasts uninterrupted views from every seat and individual locker rooms for every player. As a venue, it will be hard to beat for a long time.

However, it seems that Bastad is the tournament with the magic formula, topping no fewer than 40 250 events for 11 straight years. And no doubt they will try to keep that formula a secret.