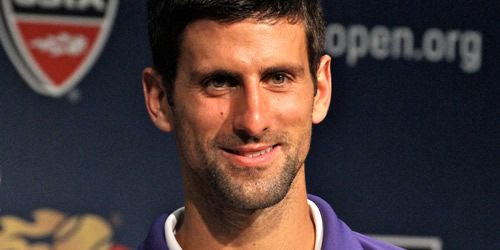 Ahead of their 16th meeting, their sixth of 2012, Novak Djokovic was quick to quell any idea that he was after revenge for his two biggest losses to Andy Murray this year: in the Olympics semis and the US Open final.

“I don’t like the word ‘revenge’. I never like revenge. I just play tennis and I try to win every match I play.”

No doubt he meant it—but when actually faced with the man who had denied him two of the biggest prizes in tennis, such fine intentions must quickly have evaporated. For these two had much on the line even aside from ‘revenge’. Djokovic was on a 9-0 winning streak since losing in New York—5-0 to win Beijing and 4-0 so far in Shanghai—and had notched up a tour-leading 69 wins this year.

Although Murray had not matched that form since their dramatic US final, he was on a 12-0 run in Shanghai, playing to win his third title in the stunning Chinese city.

And the two friends/foes, born in the same week, have vied for dominance throughout their six-year ATP rivalry. Djokovic led their head-to-head 8-7, but they stood all square, 6-6 on hard courts, and since Djokovic won their first four matches, Murray had led the rivalry 7-4—and won three of their five meetings this year.

Then there was the not insignificant question of the year-end No1. With Federer taken out of the tournament by Murray in the semis, the Shanghai title would almost guarantee the top position to Djokovic come the end of 2012.

The two men have always brought out the best in one another, boasting similar qualities—outstanding athleticism, unparalleled defensive skills, match-winning skill on the backhand from any part of the court and the touch to pull off drop-shots at will. Nowhere had this been more clear than in their two Grand Slam meetings this year, both long, tight five-setters with very similar scorelines.

In this best-of-three match, it was Murray who came under pressure first, going 15-40 down in his opening service game. He saved both break points and then creamed a 135mph serve, but Djokovic came back at him for a third break chance, and a wild backhand gave the Serb a 2-0 lead.

It begged a question: Where was the all-guns-blazing Murray who attacked Federer from the first ball in the semis? He answered it in the first point of the next game, a bullet of a return of serve that passed Djokovic in a blur. A cross-court backhand passing shot punished the Serb again and another terrific forehand down the line earned the break back.

But this was like watching two Murrays play one another and the defence-turned-attack of the Serb, including a remarkable angled pick up at the net, earned Djokovic two chances to break back. A backhand error from the Scot levelled things again.

Murray responded again, pounding Djokovic to 0-40 with a remarkable backhand that clipped the line by a millimetre. He made one more break, but it was simply a precursor to yet another break, and they remained locked at 4-4.

Djokovic was the first to break the deadlock and hold only his second service game. Murray had to serve to save the set, but in danger at 30-30, he took the initiative at the net to hold. This match was proving to be predictable in its unpredictability, but they were locked at 5-5 at the one-hour mark.

Now, though, it was Djokovic’s turn to come under pressure and he fired a forehand wide, conceded the break and smashed his racket to smithereens. This time, Murray served for the set and, as though feeding off the frustration of Djokovic, he calmly played out an error-free game to lead 7-5.

After a storm of a first set, the match settled into a calmer, more balanced affair in the early stages of the second. Both played near faultless tennis until 3-3, when Murray deployed one of the newer shots in his book of tricks, the forehand slice, and Djokovic netted a backhand to give Murray the first break point of the set. He attacked the Djokovic serve, out-fired him at the net and took the lead.

It gave Murray the chance, after two hours, to serve for the match—but that set Djokovic alight. In a game replete with winning drop shots, hot dogs, and absurd angles onto the baseline, Djokovic broke back. In a quick switch of fortune, Murray was serving to save the set rather than to win it, and he did. They went to a tie-break that would outlast even the dramatic one that decided the first set at the US Open.

Djokovic took the early lead when Murray netted first a backhand and then a forehand, but they changed ends at 3-3. This time, Murray took the lead with a backhand return-of-serve winner and ran down some remarkable hitting from Djokovic to bring up two match points.

The Serb responded, and they again changed ends all square: 6-6. Now Djokovic brought up set point, but things would not be resolved so soon.

They changed ends at 9-9, and Murray earned his fifth match point but still Djokovic resisted. Neither man gave way on serve through to 11-11 when, finally, Djokovic took one vital point against serve as Murray hit a forehand wide. The Serb served out the set with a flourishing one-two serve-and-volley winner.

This time it was Murray’s racket that ended in pieces: After more than two and a half hours, they would have to play a deciding set.

Not until the fifth game did either man face a break point—Murray—as each pinned down the other with gruelling corner-to-corner exchanges, though Djokovic was holding serve with greater ease. Murray faced more break points in the seventh and this time could not resist. Djokovic took the lead, 4-3 and held his own serve with an ace.

The Serb looked full of confidence, as he had done since breaking Murray at the end of the second set, and dominated the Murray serve to bring up championship points. After three hours and 21 minutes, he took the set, match and title, 6-3.

The win, his 13th Masters title, took Djokovic to an impressively neat 70 wins this year. He said afterwards that he “still had a bit to do in the indoor season” to be No1 at the year’s end, and in truth, “little” just about summed it up.

It now requires a super-human run from Federer and a disastrous falling off from Djokovic to deny the Serb the last 2012 prize.