Shanghai Masters 2013: Ninth seed Richard Gasquet suffers a 6-3 6-4 defeat by Vasek Pospisil in the first round 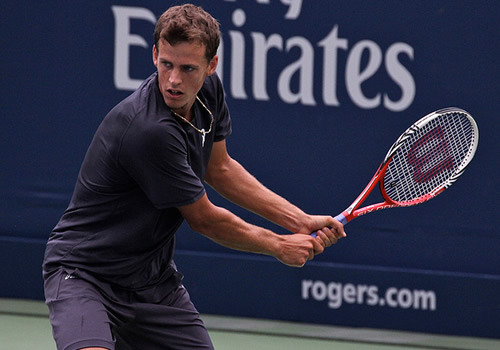 The rain may have poured cold water on the Shanghai Masters schedule for the second consecutive day, but beneath the closed petals of the majestic Qi Zhong stadium, the future of men’s tennis shone brightly.

For while the opener was a battle of the old guard—the 32-year-old former No1 Lleyton Hewitt, and the 29-year-old 22-ranked Andreas Seppi—the remainder of the day was packed with young, fresh talent all battling for big points and, just possibly, a ticket to the World Tour Finals. With all three matches being first-time meetings, they also offered intrigue along with the drama.

Indeed of the five hot players aged 23 and under in the current top 50, all but the injured Jerzy Janowicz were in action, one after the other, on this huge Shanghai stage.

The youngest of them, the 22-year-old, 28-ranked Grigor Dimitrov, took on 23-year-old Kei Nishikori, in a contest of flair, variety and unpredictable tennis.

After them came the other 22-year-old, Milos Raonic, who held the very real prospect of qualifying for the London finale. Ranked at 11—though 10 in the race—he arrived in Beijing with back-to-back finals in Bangkok and Tokyo, winning the former. His looked the easiest match-up, played against the 29-year-old Pole, qualifier Michal Przysiezny.

He sat at No9 in the race, and only 20 points behind Stan Wawrinka at No8. He had piled on the matches in the last month or so, reaching his first US Open semi-final and following up with semis in both Bangkok and Beijing, but he needed a few more match-wins to support his surge, and against his young opponent in Shanghai, that proved to be a problem.

He faced the tall, energetic game of 23-year-old Canadian Vasek Pospisil, a man ranked 141 in April this year but who smashed into the top 40 in August with his break-out performance on home soil at the Montreal Masters.

In Pospisil, Canada has another young player who, though slower to mature than Raonic, has shown at least as much promise. They joined forces this year to take Canada to the semis of the Davis Cup, falling in the deciding fifth rubber to Serbia.

But although the spotlight had thus far focused on the big frame of Raonic—now the owner of five titles from 10 finals—his lesser-known compatriot was beginning to make waves of his own.

Pospisil is, in fact, the elder by six months, and only an inch shorter at 6ft 4in. As teenagers, they played one another four times, with Pospisil winning three of them, but it seemed to take longer for him to grow into his frame and talent.

The latter was certainly there for all to see when he broke the top 100 last summer—notably in taking David Nalbandian to three sets at Queen’s. He also won Challengers, then beat Andreas Seppi at the Toronto Masters and reached the quarters in Kuala Lumpur.

But at the end of 2012, he was hit by glandular fever and missed the Australian Open. So he returned to the Challenger circuit, winning Johannesburg and later Vancouver. He took Mikhail Youzhny to five sets in the second round of Wimbledon to again break the top 100, and reached his first main tour semi-final in Bogota.

So Pospisil was poised for a breakthrough, and where better than on the fast courts that suit his big all-court game in front of home support?

In Montreal, he beat John Isner, Radek Stepanek and, his first top-10 scalp, Tomas Berdych in an inspired, gutsy performance that combined the strengths of the big Czech with nimble movement and an enthusiasm for attacking the net.

His increasingly confident tactics were helped, he revealed, by former professional Frederic Fontang: “We are trying to add a level of aggression into my game and play faster…I have always had it in me to play aggressively, but I tended to be more passive. We have worked really hard to try and take my game to opponents. That means not getting bogged down in long rallies and striking the ball early, and on the rise.”

This aggressive style took the Canadian to his first Masters semi-final and a first senior-level meeting with compatriot Raonic, and it proved to be one of the matches of the tournament, decided by a final-set tie-breaker.

And although Raonic, under new coach Ivan Ljubicic, has continued to grow in stature, Pospisil has not rested on his laurels either. Indeed in his last match, he took No4 David Ferrer to a third-set tiebreak in Beijing.

Gasquet, to his credit, has tried to become a more offensive player this season, and he has the variety of shot and touch to make winners from all parts of the court. But against the shot-making of Pospisil, he struggled to take control of points or the match. Where the Canadian constantly took the ball on the rise from inside the baseline, Gasquet was forced back into old territory, on the city name two metres behind the baseline.

Pospisil broke in the fourth game with what became a prolific winning tactic, a whipped forehand down the line. By the time he served out the set, 6-3, he had notched up 16 winners to two from the Frenchman and, to press home the point, he broke in the opening game of the second set, too.

By the time Pospisil led 3-1, he had made 15 forehand winners to Gasquet’s one, and even when the Frenchman tried to break the pattern by attacking the net, the Canadian passed him with a cross-court whip worthy of Rafael Nadal.

Too late in the day, Gasquet tried to use his great backhand more offensively but he did not earn a single break point in the match. Pospisil hit three aces to serve out his second top-10 victory of the season, 6-4, in only 69 minutes. He had dropped only three out of 28 points on his first serve. More significantly, he deprived Gasquet of valuable points in the race to London—and opened the door a little wider for compatriot Raonic.

Pospisil next plays Gael Monfils in what promises to be a hugely entertaining affair. Beyond that lies the prospect of Roger Federer, also fighting for his place in London, though the Swiss will first take on Seppi, who dispatched Hewitt, 6-4, 6-2.

Elsewhere in the draw, there were assorted seeds still clinging to an outside chance of London qualification, but forced to play indoors on Shanghai’s practice courts.

And what of those other young guns hoping for late-season surges? Nishikori, who reached a career-high of No11 in June this year, has slipped to 17 in the race but enjoyed the Shanghai stage in beating Dimitrov, 6-3 6-4.

For the Bulgarian, still in search for a permanent coach, it marks the fourth first-round loss in his last five matches. He has enjoyed a few big wins during the year—notably victory over Novak Djokovic in Madrid—but is still in search of the consistency necessary to join fellow ‘young guns’ in the race to London.