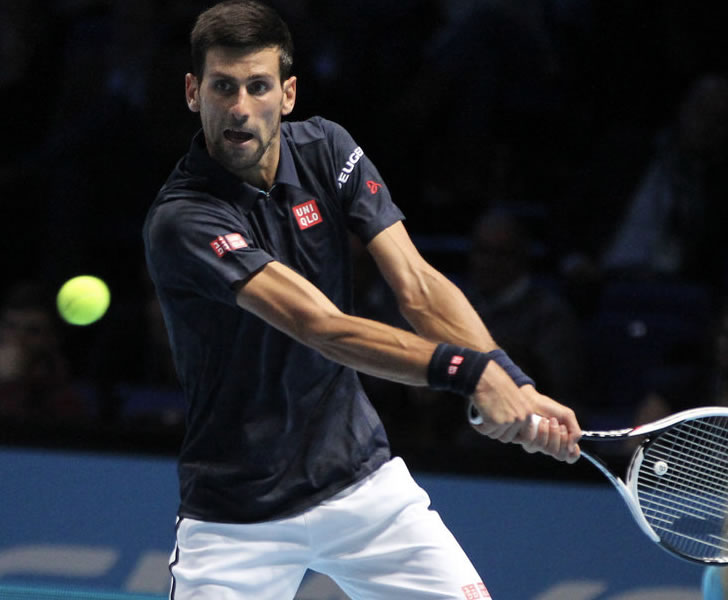 The inexorable rise of former world No1 Novak Djokovic since elbow injury forced him down to No22 in the ranks in May has continued in Shanghai, a city where he is now on target to win his fourth title.

Not that success in China is strange for the super Serb. Since winning his first season finale—then known as the Masters Cup—at the magnificent Qi Zhong tennis centre in 2008, he has won nine more titles: three Rolex Shanghai Masters and six Beijing 500s. That amounts to a 68-9 record, and he has yet to be beaten in finals—bad news for the young man who will face Djokovic in the Serb’s 11th Chinese final.

Djokovic had to face 21-year-old star in the tall shape of Alexander Zverev, who qualified for the Nitto ATP Finals with his semi-final run in Shanghai. What is more, when it came to Masters performances, Zverev was up there with the best: one title this year from three finals, to add to the two Masters titles he won last year.

Indeed Zverev had won more Masters matches than anyone on the tour this season, 22-6, and last year, he beat the below-par Djokovic in their only previous match, at the Rome Masters. Now he was aiming to become the first man this year to win 50 matches.

However, the young German this time was considerably second-best to Djokovic on the fast, hard courts of Shanghai, suffering a swift one-hour 6-2, 6-1 loss in the Serb’s 1,000th match on the tour.

The match was evenly balanced until a double fault in the sixth game, and Djokovic pounced to break, 4-2. Zverev’s serve continued to let him down, while the Serb’s ever-improving deliveries tested and probed. Another break, and Djokovic had the set, 6-2, in just half an hour.

The young German had got only 42 percent of first serves in the box, and while he had hit more winners, a modest five to two from the Serb, his error count was up to 11. No wonder Zverev looked frustrated, looked to his box and to the roof: He would now also serve second in the second set.

The break again came early, Djokovic metronomic in his baseline game, testing his opponent’s concentration, drawing first a backhand error then a volley to take a 3-1 lead. The Zverev racket took the punishment, and was tossed to a fan in the crowd, but would it refocus the German?

The answer was swift. Another break for 5-1, and Djokovic eased to the final, 6-1, in a scant hour without facing a single break point. He had drawn 24 errors and only seven winners from Zverev, a statement win by the master, though Djokovic admitted:

“Obviously Sascha can play much, much better than he played tonight. Quite a weird match from his side… he was not moving that great and making lot of unforced errors, and I was just playing every point like the first one.”

That is, of course, the impact of Djokovic’s tactical pressure, flawless return game, and incomparable flexible fitness—and it all earned him that No2 ranking over Federer.

If he goes on to lift a fourth Shanghai trophy, he will move to within just 35 points of Rafael Nadal in the Race to London—where he has also become hot favourite to seal the end-of-year No1 accolade after a storming comeback season that has taken in victories at Wimbledon, the US Open, and the Cincinnati Masters.

He summed it up:

“Where I was about four months ago and where I am today is quite an extreme opposite. I’m just cherishing that achievement and every moment spent on the court.”

He then added: “Obviously, I worked hard for it, and my ultimate goal is to get to No1 by the end of the year.”

The question now remained: Would he face Federer for a 47th time in a showdown between the tournament’ most prolific champions?

The Swiss took on 21-year-old Borna Coric, a great talent with a work ethic to match, still only 21 but he had already been up to 33 in the ranks at the age of 18, reached two finals, and now had two titles—and that despite a break to undergo knee surgery at the end of 2016.

Just how good he has become was clear in his previous two matches with Federer this year. He led the then defending champion in the semis of Indian Wells to force the Swiss star’s very best to win in three sets, and went on to beat the then-No1 Federer in Halle, again in three.

Once again, the bold Coric came out with an aggressive mind-set and game, though he was helped by Federer missing most of his first serves. From 0-40, the Swiss got his first two points but Coric forced a final error for an opening break.

Not content with that, the young Croat produced some big serving to hold to 15, 2-0, and kept up the pressure with a love hold, 3-1. And he did the same in closing out the set, 6-4, with the kind of tennis that took him past Stan Wawrinka in the first round.

The Croat’s baseline game has always impressed, but now the quality of his serve has improved to match it, and Federer was not getting any plays on his return game. In truth, the Swiss looked a little flat, a step off the pace, lacking the explosiveness he needs for his attacking game.

Three challenging matches so far in a difficult section of the draw had perhaps taken a toll on the Swiss man’s 37-year-old body, and the second set began in very similar style, with an immediate break courtesy of a Federer smash into the net. His error count rose in the face of deep, aggressive serving and baseline shots from Coric, which prevented Federer taking control at the front of the court.

A love hold took the Croat to 4-2, Federer had to hold off a break point in the next game, but Coric made no mistake in serving it out with a forehand winner, 6-4. He had offered up no break points and dropped just nine points on serve.

Coric will rise to a new career-high No13 come Monday, and is up to No11 in the Race to London. There, of course, his fate lies first in the hands of Djokovic and then in the hands of the five men above him who could still qualify for the final three places during the final three weeks. For now, he can celebrate reaching his first Masters final.

Three places remain, with a maximum of three more tournaments available: three ATP250s next week, followed by two ATP500s the following week, and concluding with the Paris Masters.