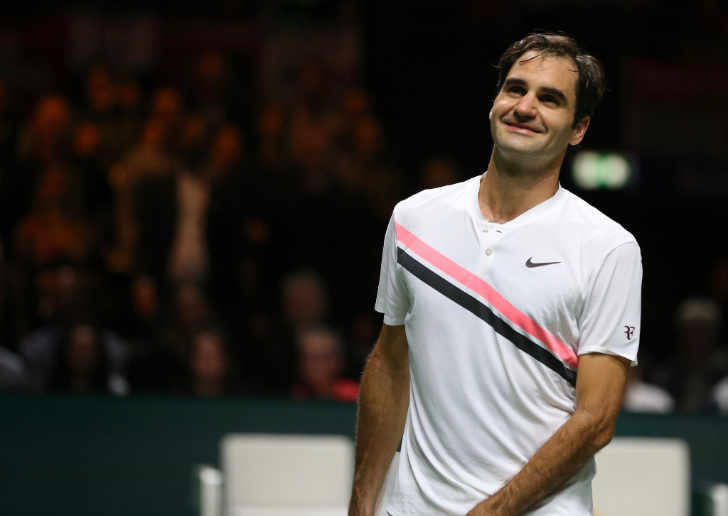 Defending champion and world No2 Roger Federer faced one very big test at the start of his title defence at the Shanghai Masters this week, and it came in the shape of 6ft 6in 22-year-old Daniil Medvedev.

The 22-ranked Russian had make a step change in his results this season, finding a calmer approach to his matches rather than letting his emotions get in the way of things. It had yielded great results: His first three titles.

The most recent was at the ATP500 level in Tokyo just days ago, and what is more, Medvedev had done it as a qualifier—seven match-wins—and beaten home hero Kei Nishikori in the final. He had, incidentally, also beaten both Diego Schwartzman and Milos Raonic, and then came back from a set down to beat Ze Zhang in Shanghai. It earned him his first showdown against Federer.

He came into the match with a 37-20 record overall and 32-11 on hard courts, second only to Juan Martin del Potro. But he was after his first top-10 win of the season against Federer.

His problem was not just that Federer revels in the fast condition of the Qi Zhong Stadium but that the biggest crowd so far this tournament was 99 percent in the Swiss man’s favour. For Federer is adored in these parts, and the Shanghai faithful are some of the most vocal in the world.

Federer, though, had spent a lot of time in the run-up to this match in off-court obligations. Before Shanghai he was in Tokyo, home of his new clothing sponsor, Uniqlo. There was more of the same in Shanghai, plus features with tournament sponsor—and Federer sponsor—Rolex, plus a fans’ event, and the birthday celebrations of the tournament itself, 10 years and counting. The two-time champion had been centre stage every day.

So he had to get his eye in quickly, and there were early tests from the exciting Russian, including an exchange of breaks in the first set. It was not just Federer who was willing to come to the net at every opportunity: Medvedev was more than willing to attack, and take the game to Federer.

The Swiss failed to convert a break chance in the seventh game, but drew rapturous cheers from the red-clad sweep of fans as he ghosted from defence into attack for a couple of volley put-aways to earn the break in the ninth game. He served out the set, 6-4, with a tidy 14 winners, nine at the net.

But Federer would rue missing the chance of a quick break in the second set, as Medvedev fended off a challenge in the third game. Luck also seemed to be on the Russian’s side, even if the crowd was not. He pulled off a lunging volley that spun over the net and back to his side. Federer nodded, applauded, it was too good. And at the first time of asking, Medvedev converted a break point to level the match, 6-4.

Federer was still playing clean, aggressive tennis, 10 winners to just seven errors: His problem was that Medvedev was playing at a great level: 16 winners for only three errors, and won six out of seven net points.

Things looked dangerous indeed for the Swiss in his first service game of the third set, but he went for a huge second serve to save break point. Still, Medvedev’s serving, and his one-two forehand finish, were too good, and Federer could not convert a break chance and they edged on to 4-4 via some crowd-pleasing net exchanges—old-school tennis played by a 37-year-old on one side and a 22-year-old on the other.

But Medvedev’s gruelling post-Wimbledon efforts, including the title in Winston Salem, Davis Cup after the US Open, the quarters in St Petersburg, and the title in Tokyo last week, seemed to take their toll. It was just one wayward service game, concerted pressure from Federer, and the break was made. Federer served out the win, 6-4, after almost two hours—and the Swiss roared his relief.

It was a warm exchange at the net, too, after fine tennis on both sides, and fine statistics too. Federer finished with 38 winners, 27 errors, and 29 points won at the net, Medvedev with 28, 23, and 10 respectively.

Both will remember their first encounter. But it is Federer who moves on to a third-round match against Roberto Bautista Agut, who beat qualifier MacKenzie McDonald in three sets.

In the other half of the draw, a fellow champion at the weekend, Nikoloz Basilashvili, had arrived in Beijing on a career-high ranking after scoring a big victory at the ATP500 in Beijing over top seed Juan Martin del Potro. Three months ago, Basilashvili had never won an ATP title. Now, he had scored his second since Wimbledon, having won as a qualifier in Hamburg.

The Georgian continued his winning streak with an opening win over Denis Shapovalov, but now faced the No4 seed, 21-year-old Alexander Zverev, who was within touching distance of qualifying for the Nitto ATP Finals. And the young German took a big step closer to London with a 7-5, 6-4 win, despite being a little under the weather. It marked his 47th win of the year, second only to Dominic Thiem’s 48—and the Austrian lost his opening match in Shanghai.

Zverev, then, is through to the third round for the third straight year, and will next face the man he beat to claim the Washington 500 tournament at the start of August, Alex de Minaur.

There were also wins for the increasingly impressive No10 seed Stefanos Tsitsipas in a quality encounter against Karen Khachanov, and for No7 seed Kevin Anderson over Mikhail Kukushkin. No16 seed Marco Cecchinato overcame Hyeon Chung in a thrilling three-setter, 4-6, 7-6(5), 7-6(5), to set a third-round match against three-time Shanghai champion Novak Djokovic.